Every professional media composer will tell you that the hardest thing he or she ever has to do is match and replace a temp score. Temp (temporary) scores are pieces of existing soundtrack music, library music or songs that the director/producers/editors have used as placeholders during production and post-production. For entertainment TV these usually take the form of a chart song that appeals to the desired audience demographic and matches the energy of the programme the producers are trying to make. For drama or film it will usually be chunks of existing orchestral soundtrack which are used in the edit, and which the commissioned composer has to replace along to the finished pictures. Editors love having music to cut to, as it provides pace and structure to a scene as well as setting the all-important tone. The problem is, of course, that once the music and pictures are working together, even the slightest change is going to upset everything.

Anyone familiar with soundtracks will often be able to spot which tracks have been used as temp cues in most mainstream movies, just by hearing the beats and chord progressions the composer has had to stick to. Hans Zimmer constantly rages against the fact that he is often asked to replace his own work from previous films, which gets used as temp tracks in movies he ends up working on. One of his cues from The Thin Red Line, in particular, has been used in so many trailers and temp scores that he often asks directors specifically to avoid using it. 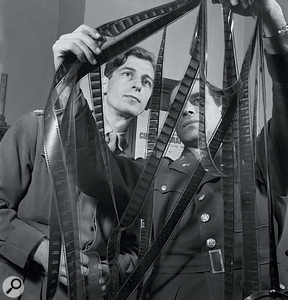 "I say, old chap, this editing lark would be a darn sight easier if someone would invent ambient electronica.”One of the most infamous examples of a composer fighting against the temp score was the sad case of Academy Award-winning Alex North. After months of work composing the score to 2001: A Space Odyssey, he only discovered that director Stanley Kubrick had ditched every note in favour of his original temporary classical soundtrack while he was sitting in the audience attending the premiere of the movie he (incorrectly) thought he'd scored. The light of cinema history will record that the director was right, of course (Kubrick always was), but seriously, can you imagine the drinks party afterwards? #awkward.

For TV, temp tracks are equally lethal, but for slightly different reasons. The longer a temp track gets kicked around the production office, used on promotional clips, previews and pilot episodes, the more profoundly it gets ingrained in the entire production team's idea of what the show is trying to be about, and the more impossible becomes the task of replacing it with something similar, yet different. Trying to convince your clients to trust you to be original is difficult at the best of times. Trying to do so while competing with a track whose production budget is probably 40 times greater than the one you've (not yet) been given, whilst at the same time ticking all the appropriate boxes and still not sailing so close to the wind of the original track that you enter the deep, dark, soul-destroying waters of the soundalike parody is nothing short of a nightmare.

The only solution is to be there from the start. Try to give them your own temp tracks to work with, the moment you know what the job is. Give them 20 tracks, give them to the producers yesterday, and make sure they are of at least as good a standard as all other movie soundtracks and the work of all the music producers, composers and songwriters that have ever lived.

Nobody said it was easy. They were right.