Do we make our own luck, or does our luck make us? Either way, you need to be prepared when opportunity comes along. 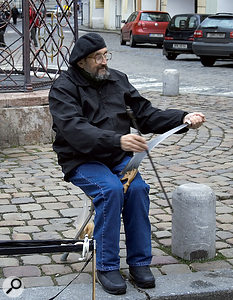 "It's not the fanciest setup in the world, but I've used it for a long time and I know it inside out. Also, it's helpful when I need firewood.”

If there's a wedding, a royal event or — even better — a royal wedding event, there is one piece of music that is guaranteed to be played at some point. The English baroque composer Jeremiah Clarke was born in 1674, and his Trumpet Voluntary is one of the most recognisable pieces of music ever written. Little is known about him, other than that he was the organist at the Chapel Royal and once the Vicar-Choral of St Paul's Cathedral. We also know that he suffered depression for much of his life, and after a disastrous romantic episode where he lost his heart to "a lady of superior rank”, he decided to end his life. What he couldn't decide was whether he should drown himself or hang himself. So he did the only sensible thing. He tossed a coin. Oddly, the coin landed in the mud vertically upright. So he shot himself instead.

Luck is the most powerful force that influences our careers and yet, as bookmakers and casino owners will confirm, it is the most infuriating thing to try to capture. And to maintain it is nothing less than impossible. I don't know about you, but the greatest jobs I've ever got have had a habit of landing in my lap, whereas the gigs I've really chased seem to be the most elusive. I've often suspected that the principal reason for this is that the mindset needed to get the work — hunger, ambition and determination — is the exact opposite of the mindset needed to actually do the work: calmness, curiosity, patience.

"The harder I work the luckier I get” is a sentiment so often repeated that we can't even know where it originated, but its timeless truth nonetheless endures. Honing your composing craft is a lifelong pursuit, and mastering the tools of your trade is an absolute must, whether that means knowing where to find your sitar samples or being able to call up your best kick drums at the click of a mouse. I've said this for years, but a low-powered studio system that you built from the ground up and know inside-out is infinitely more valuable to the media composer than a big computer over-stuffed with countless plug-ins you've never used, sample libraries you've never explored and a DAW you are still trying to understand. Speed is currency in this game, and getting your demo to the production first so it can be kicked around the office for a bit is worth more to your career in the long term than a flawless track that you might have lovingly taken two days to tweak the guitar EQs on.

Like a doctor on call, or Bruce Wayne waiting for the Bat Signal, the media composer must be vigilant, ever-ready and prepared to drop everything to spring into action with a cracking piece sent to the producers at the drop of a hi-hat. Napoleon required his generals to have a good knowledge of both tactics and strategy, but, above all, he asked that he be sent only the ones that were lucky. The media industry is as arbitrary and silly as it is pitiless and wonderful at the same time, and I promise you that there is no such thing as an effortless success.

There's a great quote attributed to Harrison Ford about his early days hoping to make it as an actor. Legend has it that he couldn't decide whether he should move to New York or to Hollywood, so he tossed a coin. It came up New York. So he tossed again.