In February of this year, Google Maps passes its first decade of being online. And yet during a recent parliamentary debate about the use of drones, a 76-year-old member of the House Of Lords Digital Skills Committee reported how “horrified” she was to discover a few days earlier that on a web page called “Google map or something” she could find an image of her own house.

Out With The New

We all know the pace of technological change is dizzying, so much so that even those of us whose careers depend on it find it hard to keep up. Or, more accurately, we often lack the fight to keep on keeping up. I’m now about four versions of Mac OS X behind where I probably should be, but if you run a computer-based studio system with lots of plug-ins and virtual instruments, you view each OS and DAW stride forward as a sort of perverse hostage negotiation. On one side, you’re tempted by all the additional features the upgrade offers (even though they’re nearly always shallow and largely aesthetic), but on the other, you’re brought back to earth by the terrifying bump of wondering if it’s going to permanently disable vast swathes of your sonic toolkit. 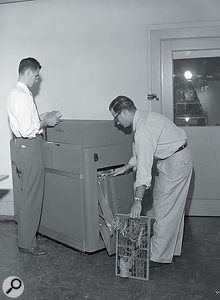 “I told him he’d struggle to upgrade to Logic X using punch cards.”I also wonder if the reason I’m feeling so upjaded (an adjective I’ve just invented) by the whole thing is that I worry we may have reached a depressing peak. For example, I currently own about six big orchestral string libraries — and, as lovely as they all are, I doubt I use more than a handful of the same string sounds in 99 percent of my music. Who among us can say they have properly auditioned every single preset in Omnisphere?

Libraries are often so big these days they are supplied on their own hard drives, which often require powerful computers of their own just to be quick enough to access all the different sound options. I love technology and what it does for us, but I could learn to play a ’cello in the time it would take to properly go through 500GB of ’cello samples.

Perhaps the proliferation of retro tech, in the form of new versions of classic synths, drum machines, and vintage outboard equipment brought back into service, speaks of an industry that finds the past more comforting than it finds the future exciting. Or perhaps, in the same way that broadcasters love bringing old TV formats back to life, it might suggest that we have simply run out of marketable new ideas. I hope not. One of the hardest things to do is revisit the past and make it relevant for the present — something which will be well-known to anyone who has ever been asked to rework the theme tune to an old TV show. Which elements to keep, which to lose and which to enhance?

I was asked by a channel recently to revisit a well-known theme tune for a show that ran for nearly 18 years back in the 1950s and ’60s. It was a soaring and elegant theme, written for a dour post-war Britain when Princess Margaret was foxy and people still knew how to cook things with powdered egg. And the brief was almost impossible: to keep the spirit of the existing, yet make it relate to modern audiences. I felt a bit like a tailor trying to make a pair of studded leather trousers using the floral pattern material from your granny’s chintz curtains.

The first Apple Macintosh computer had a monochrome 175,000-pixel screen. Thirty years later, the current iMac has a 5k display with 14.7 million pixels, yet costs just four dollars more than the Mac did in 1984. The race forward is inevitable, wonderful and cheap, and we should embrace it even when it comes at a higher price.