When TV composers talk about archiving, they usually mean backing up their hard drives. But some people have grander ideas... 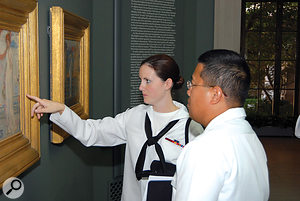 "And here we have a real treasure — the original folio manuscript of the theme music from Bargain Hunt...”

Comparatively speaking, humans have been around on earth for such a short period of time that if we were all suddenly to become extinct, we probably wouldn't even show up in the fossil record. The only traces of our ever having been here would be the radioactive waste materials we've clumsily tried to dispose of, the debris of our satellites in orbit and the bits of the Apollo spacecraft that we left on the moon. Or so I thought, until I received an email this week suggesting that added to the list of humanity's legacy we should also consider the "Public phone vote tension bed from ITV's Dancing On Ice”, the Gladiators music and the theme tune to The Trisha Show.

A Dutch company is apparently running a TV Music Archive, the purpose of which is to 'conserve and manage' for future generations the precious artistic resource of 'important' musical TV works. Their search somehow led them to me. This feels a bit like selecting the Go Compare tenor as Earth's first ambassador to meet any alien race we happen to encounter, or some future generation of biologists trying to piece together 21st Century human anatomy, using as their reference only the crudely drawn pictures of cocks scrawled on the walls of bus stops.

I know, of course, that a huge amount of effort, talent, risk and imagination goes into making TV programmes, but the idea that this one component of a creative whole should be singled out by an organisation for special treatment seems a bit strange. The notion of a museum of TV music does, however raise some great questions about what you'd choose to save. Which examples of the genre would you like to see included? What makes great TV music? Obviously, everyone aims for a piece of music to become an instantly recognised classic, just as the people making the TV programmes themselves do, but does this come from having some special magical ingredient imbued by the composer? Or does the fact that it's attached to a successful show, or that it's on all the time and weaves itself into the fabric of the popular consciousness, guarantee that even mediocre work can stand the test of time? (Feel free to send me your suggestions via Twitter @paulmfarrer.)

My own personal favourites would have to include Dennis Wilson's Fawlty Towers, huge chunks of Ron Grainer's work (particularly Steptoe & Son and Doctor Who) and pretty much anything and everything by Ronnie Hazlehurst.

Don't Rest On Your Laurels

While obviously it's flattering to be asked to become a roped-off museum piece, I tend not to look back too much at my past work, because you're only ever as good as your most recent demo. Navel-gazing, or trying to let the past inform the future, can lead you to forget just how hungry everyone else is. No matter what the gig, there is always someone striving to do it better, smarter and quicker than you. Survival in this industry takes staying power, luck and pragmatic determination. Life's a pitch. Don't let anyone tell you otherwise.