Most of the time, TV composers are happy if anyone notices their music. It's when people start to like it that the trouble starts. 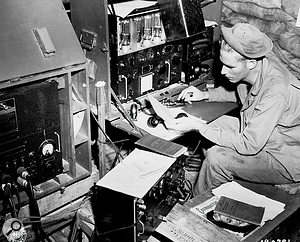 "I've had the whole thing in pieces three times, Sarge, and I still can't figure out where that damned music is coming from...”

About 14 years ago, I composed the music for a TV documentary series about the Second World War, and for some bizarre reason, I seem to get more emails from people about this project than pretty much any other show I've done. Perhaps it was because the series was incredibly well put together? I wouldn't know, of course, because obviously they never sent me a copy of the finished thing to watch. Or maybe it's because the show was picked up by lots of different TV channels around the world, and so many viewers have seen it over the years that eventually people noticed the sounds behind the voice-over that weren't machine-gun fire and Third Reich propaganda speeches? Perhaps it scored the elusive double whammy of composer glory, whereby they both used the music sensitively, intelligently and loud enough so you could actually hear it, and spelt my name correctly on the end credits? Whatever the reason, it seems to be the one soundtrack of mine that people consistently ask for copies of. And I'm never quite sure what to say.

I suppose I could put it all up on a web site and simply send interested people the link. Or I could try and get it onto the iTunes Store or any of the other online portals for music distribution, and try to earn a few nano-pennies that way, but the obstacle to all of these ideas is that I couldn't really give a rat's arse. We've all had clients who don't know what they want, don't know how to ask for it and can't even feign indifference once they hear something they like — but the fans can be even worse. I struggle to be inspired to share my work with anyone who approaches me like the enthusiastic overseas TV music connoisseur who emailed this morning:

"I wish to thank you for World War Two best and most beautiful TV soundtrack we have ever listen to. Please send link where I can download this music FOR FREE. Urgent Request goodbye.”

There are so many worrying things to say about this that I'm not even sure where to start. The fact that something can apparently be defined as both "best and most beautiful” and yet simultaneously not be worth even offering money for is somewhat depressing. Imagine the disdain with which he communicates with the composers that he merely just likes a little bit. Imagine the horror and indignation when he opens up his inbox later today and finds a reply from me asking him if perhaps in return he'd be happy to come and mow my f**king lawn for me.

The idea that music is a commodity that deserves to be paid for by the public has been degraded to the point where even its biggest fans seem to view free distribution as a fundamental human right. And I'm not entirely sure how we begin to redress this balance. One thing is for sure, though: as long as I have any say over who gets to listen to my music in the comfort of their own home (a thought that, in itself, I find a little unnerving and baffling), they aren't getting anything from me unless they at least ask nicely.