Hyde Street Studios are under near-constant threat, but their owner’s enthusiasm and tenacity are prevailing.

San Francisco’s Tenderloin district remains a morass of homeless hippies and druggies, much as it was during the Summer of Love in 1967. That swarm of mostly helpless humanity has enveloped the various recording and post studios that have operated at 245 Hyde Street since legendary engineer Wally Heider opened his eponymous studio there two years later. The druggies and the derelicts still kind of annoy Michael Ward, remaining sole owner of that venue’s current incarnation, Hyde Street Studios. He’s had to shoo vagrants away from the studio’s art deco front doors since day one. 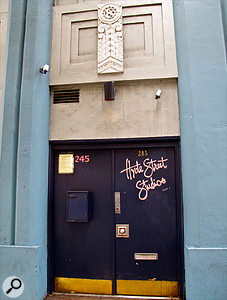 They’ve been more predictable than the studio’s real-estate situation, which has come close to shutting those doors for the last time on three occasions in recent years. Ward has been able to renegotiate the rent in a few instances with the development-minded landlord, who bought the building from an earlier failed developer and who is still in the process of raising the capital needed to turn the hulking buildings (which are not landmarked) behind the cerulean façade (which, oddly, is) into luxury condominiums. Ironically, though, the vagrants and bag ladies have actually been somewhat beneficial for the studio: “If it was in a nice neighbourhood, we’d have been gone decades ago,” says Ward.

The fact that Hyde Street Studios haven’t succumbed makes the studio remarkable, and marks Ward out as, in his words, “an enthusiast”. Ward isn’t a fighter, he’s a survivor, but he’s driven by a desire to maintain the sense of history there that rivals that of other legendary palaces of sound.

It is just a matter of existence, too, he’ll inform you. Ward has no illusions that he or the music-production business will ever get back to the days when record labels and ad agencies were happy to pay the $140 an hour that was on the facility’s rate card in the 1980s. “We used to get three or four long big-label lockouts a year,” he recalls. “Now, the industry has shrunk so radically, and it’s not going back.”

However, that’s no epitaph Ward is dictating; it’s simply one side of a long-term ledger whose other pages are showing an increase in bookings, including the band Train, who were in a few months ago doing part of a new LP. Ward has also been vigourously hiring out every nook and cranny in the wonderfully segmented space. “If we have a closet, we’ll rent it,” he says. He’s leased out some of the old celluloid vaults to archivists, and has several long-term production clients renting studios inside the 10,000-square-foot building.

In one sense, at least, the current shortage and prices of real estate are working in Ward’s favour: as long as he can keep the doors open, there is no way he will ever have to contend with a competitor of Hyde Street Studios’ scale. “There are a lot of people who truly do want to record in great spaces and on classic equipment that’s been well maintained by people who also know how to operate it.

“When you think about it, we’ve been struggling for 30 years,” Ward continues, acknowledging that profitability has been elusive most of that time. “But we’re still here. It’s just thick-headed tenacity. That’s the only reason anyone keeps going.” Ward remembers a talk at a regional SPARS meeting where then-president and serial studio entrepreneur David Porter posited that any studio owner that wasn’t making a return on their investment should shut the doors and walk away, which Porter eventually did with his Music Annex facility. Ward recalls other studio owners just looking at each other quizzically. “Traditional economics don’t apply in this business,” he says. “You do it because it’s what you do.”

That emotional logic is familiar to anyone who’s ever set out down this road, and as the road has gotten bumpier, more have left or, increasingly, been pushed aside by real-estate dynamics or bypassed by technology. Michael Ward and Hyde Street Studios are still on that road, but his optimism seems to be paying off, at least for now. “It’s been a shoestring since the beginning, so we’re doing better than we have in years,” he says. “I can sleep at night. We made our name, we’re on the map. We’re here.” These days, those last two words alone are worth a bottle of champagne.