The long and rich history of Record Plant began in 1968 with one of the most famous inaugural projects ever: Jimi Hendrix's Electric Ladyland. The first big mixing session, shortly thereafter, was the soundtrack to the Woodstock movie. Between them, these two landmark sessions set in motion a seemingly never-ending string of hit records, from what would eventually be several studios sharing the same name and seal of quality. 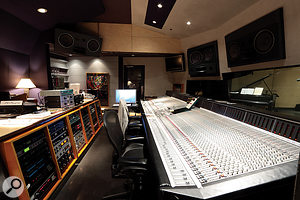 All four rooms at Record Plant are based around SSL desks: this is the Studio 3 control room. 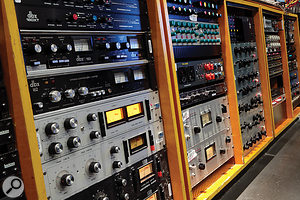 The size of Studio 3's desk is well matched by its outboard racks!

The original Record Plant, founded by Gary Kellgren and Chris Stone, was a 12-track studio in New York. Kellgren and Stone opened up a 16-track studio in Los Angeles only one year later in 1969, which quickly became known as Record Plant West. After another three years they expanded again, with a third facility opening up in Sausalito in the San Francisco Bay Area. Record Plant Los Angeles was one of the first studios to install a 24-track tape recorder, in 1970, very shortly after this technology became commercially available. However, this hefty investment only began to pay off a few years later, as clients seemed to need some time to fully embrace the new possibilities.

Besides offering technical excellence and innovation, the owners were among the first to turn the then rather clinical workspaces of a typical recording studio into a more comfortable environment, providing a 'vibey' atmosphere to help nurture creativity. Chris Stone once said that they were "changing studios from what they were — fluorescent lights, white walls and hardwood floors — to the living rooms that they are today.” 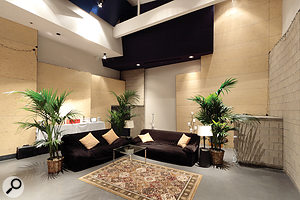 Contrasting live rooms: despite the luxurious couches, a hint of the building's origins as a warehouse is visible in Studio 3, while Studio 4 features extensive wood treatment. 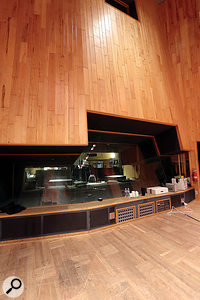 Artists seemed to love this approach, as all three studio locations were frequented by some of the greatest musicians of the time. Jimi Hendrix, Frank Zappa and the Velvet Underground all worked at Record Plant, and in the '70s, the studios produced a string of true classics: the Eagles' Hotel California; Stevie Wonder's Talking Book, Innervisions and Songs In The Key Of Life; John Lennon's Rock & Roll; and Fleetwood Mac's Rumours, to mention but a few. John Lennon and Paul McCartney also played their last jam session together in the Record Plant Hollywood in 1974.

Luck was not always on the studios' side: co-founder and engineer Gary Kellgren passed away in 1977 under tragic circumstances, and only a year later, Studio C of Record Plant Los Angeles went up in flames. But even in those grim times, the spring of hits coming from the numerous Record Plant studios never ran dry. In 1977, a young artist named Prince recorded his debut album at Record Plant Sausalito, while Carlos Santana, Chaka Khan, Stephen Stills and Aerosmith were among the other big names to pass through Record Plant doors during this period. 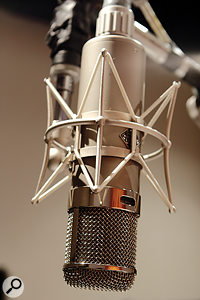 Record Plant's mic locker is home to a number of prized vintage microphones, including three Neumann U47s.In the next decade, many changes helped to transform Record Plant into the studio it is today. John Lennon spent the last day of his life in a session at Record Plant New York on December 8, 1980, and many hit records by artists such as Bruce Springsteen and Tears For Fears came out of the studios in the '80s. There were also major changes: the Sausalito studio was sold in 1981 (it eventually closed in 2008), while the NY facility closed its doors in 1987, shortly after its acquisition by George Martin, and between 1985 and 1986, the LA Record Plant moved into the former Radio Recorders 'Annex' in Hollywood. A former warehouse that was originally converted to a studio in 1946 — and where Elvis Presley and Louis Armstrong recorded back in the day — Record Plant LA is thus one of the oldest buildings still serving as a recording studio in Los Angeles.

Out In The Open 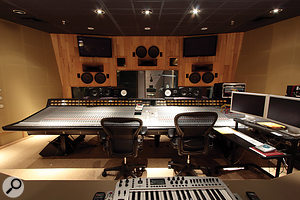 The Studio 2 control room features a G-series SSL, in contrast with the J-series desks in the other three rooms.

After a brief stint under George Martin's ownership, Record Plant was sold to the current owner, industry veteran Rick Stevens, in 1991, and had another major remodelling in 1993. Four large studios and some smaller edit suites are now grouped around a daylit atrium, with the studio offering all the amenities associated with a five-star hotel: a jacuzzi, billiard hall, and café bar. The special layout allows the studio to operate in different ways. All studios can be opened towards the atrium, which may encourage collaboration, but as you'd expect in a studio catering for a superstar clientèle, it is still possible to work in seclusion.

Although rockers like the Rolling Stones and the Black Crowes still book sessions at the Record Plant, the studios have become an R&B and hip-hop hot spot in recent years. Since big live rooms are not always required on these sessions, some of the live rooms now resemble large lounges, adding to the 'luxury hotel' vibe of the studios. Besides Hollywood's film industry, which has used Record Plant to produce blockbuster soundtracks like Mission Impossible, Men In Black and Austin Powers, the current studio clientèle reads like a Who's Who of urban music: Kanye West, Nas and Beyoncé, Black Eyed Peas, Nelly and Usher and veterans like Stevie Wonder and Herbie Hancock have recorded there in recent years, among artists such as Lady Gaga, Justin Timberlake, Christina Aguilera and Madonna. When these photos were taken, the studio space was being shared between Snoop Dogg and another hip-hop giant, Mos Def. 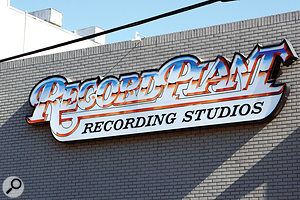 The location has changed, but the name remains!Unsurprisingly for a studio of this size and with this clientèle, each of the four large rooms hosts an SSL console: three are 9000 J-series desks with up to 80 inputs, while Studio 2 has a 4080 G-series console. Other technical features include custom Augspurger monitors and a huge collection of outboard. Equally impressive is the mic collection: besides RCA and Royer ribbons, Record Plant owns more than a dozen vintage tube Neumann mics, including U47s, U67s and three M49s.

Ironically, the current Record Plant rooms, with their rectangular shapes and concrete walls, look more 'corporate' and less like living rooms than a number of smaller 'boutique' studios that have popped up in recent years. They also have little in common with the original studio that bore the Record Plant name. But maybe that explains why all the studios that have operated under the moniker have been so successful: perhaps Record Plant should not be viewed just as a number of recording rooms, but rather as an idea, a philosophy stronger than a single building.