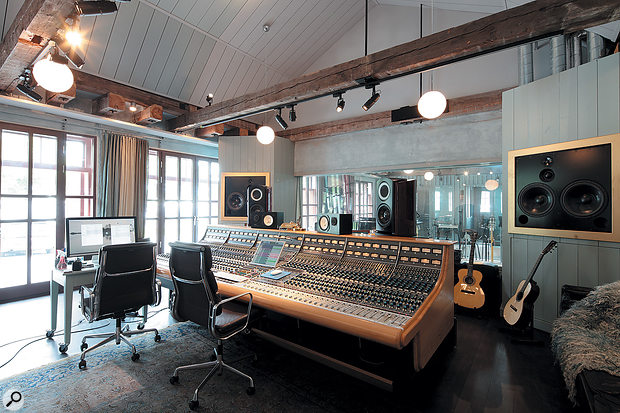 RMV’s Neve desk was relocated only a few kilometres from Max Martin’s studio.

Sweden’s newest high-end studio is built on very strong foundations, both literally and metaphorically. The building stands on the solid bedrock that underlies the city of Stockholm, and the people behind RMV (which is short for Riksmixningsverket) unite several strands of the country’s rich pop history. With RMV, they are setting out to add yet another chapter to a Swedish success story.

RMV is unusual in several respects, not least its location. The island of Skeppsholmen, only a couple of hundred metres across, lies right in the centre of the Swedish capital, just a stone’s throw away from the king’s palace. Skeppsholmen is home to a number of cultural facilities, including a theatre, several museums, an art school — and two brick buildings of, in comparison, much smaller proportions. One of the latter has been the headquarters of ABBA’s Benny Andersson for many years. From this spectacular location, Andersson has run his record company Mono Music and operated his own writing studio and a dedicated mixing room manned by his long-term engineer Bernard Löhr. 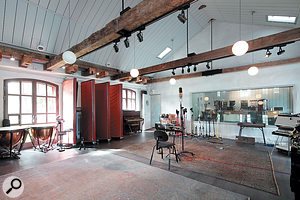 When Andersson made plans to build another studio more suitable for recording, he naturally took a look at the second brick barn next door — and after some negotiations with its owner, the Swedish government, RMV was built. Most of the construction was overseen by Linn Fijal, who graduated from recording and engineering school not long before, and who now runs RMV both as the studio manager and in-house engineer.

When the team took over the building it was in a very raw condition, with bare brick walls and a dirt floor. Skeppsholmen once served as a naval base, and this late 19th Century building is believed to have been conceived as an ammunition dump. The extremely solid architecture supports this theory, as do the number of cannonballs which were found during studio construction. When planning the studio, great care was taken to maintain the light and open atmosphere of the building, and with its many doors and windows on ground level, RMV is one of the brightest and friendliest recording venues in the world. 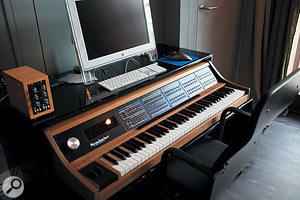 The old but still powerful New England Digital Synclavier remains one of Benny Andersson’s preferred writing tools.Another unusually large window separates the building’s two largest areas, the control and live rooms, which are accompanied by a number of smaller booths and a kitchen and office space. The studio was conceived with the idea that most of the acoustic treatment and technical aspects should be as invisible as possible. All rooms are built on floating floors, and all of the wooden ceiling panels are mounted at different angles — a brilliant idea, yet one which is easy to overlook at first glance. 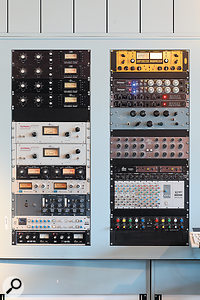 The outboard collection covers the common ground found in most high-class recording facilities in the world.Another subtle feature that might not be immediately noticeable is that the colour scheme of the building’s interior is derived from the bright blue and grey of the vintage 64-channel Neve 8068 console that is its centrepiece. This desk was relocated from Max Martin’s Maratone Studios just a few kilometres away, another significant hotspot of the Swedish pop scene. Original Neve employee Fred Hill was flown in to restore the console to its original beauty — a massive task that kept half a dozen people busy for over a month. However, it proved worth the trouble: “It’s such a nice desk, it’s magic!” says Linn Fijal. 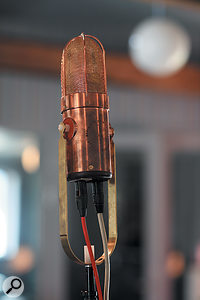 One of RMV’s two Manibus de Geer LDC microphones, which impress with their steampunk design.The maiden session at RMV took place in early 2011, with Benny Andersson’s own 16-piece ensemble, who were followed shortly after by the Hives. Since then, a lot of jazz and other mainly acoustic music has been committed to hard drive (and tape!) at RMV, and the studio has also hosted many string sessions for both film soundtracks and pop songs, with the string parts for Loreen’s ‘Euphoria’, which won the Eurovision Song Contest in 2012, a good example of the latter. 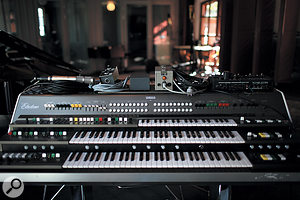 This massive — and ultra-rare — Yamaha GX1 synthesizer used to reside at ABBA’s Polar Studios.Today RMV keeps an equipment arsenal which makes the studio suitable for a wide range of gigs, with the focus laid a little more on tracking than on the mixing side of things. The outboard collection was hand-picked for quality and versatility, and with classics such as Pultec and Massenburg EQs and several pairs of Urei and Universal Audio dynamic processors, RMV covers the common ground found in nearly all high-class recording facilities around the world.

Yet what makes the venue really stand out, besides the rooms themselves, is the collection of instruments — many of which have been part of Benny Andersson’s private collection for decades. There is ABBA’s original white-painted stage Minimoog, and also an ultra-rare Yamaha GX1 synthesizer. Only a dozen examples of this predecessor to the legendary CS80 are known to exist outside Japan, and this particular unit has not only been played on ABBA productions, but was also used by John Paul Jones when Led Zeppelin recorded their last album at ABBA’s Polar Studios. 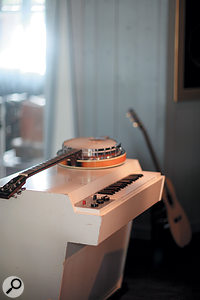 This original Mellotron is studio manager and in-house engineer Linn Fijal’s “favourite thing in the studio”.Likewise, some of the microphones also came from ABBA’s legendary recording location, and today the historic Neumann U67 and U47s are accompanied by some of Sweden’s finest new designs, such as a pair of Manibus de Geer large-diaphragm mics based around modified AKG CK12 capsules, which impress not only with their sheer size, but also with their steampunk appearance. RMV also offers a well maintained Steinway D grand piano from 1959, a Mellotron, and Benny Andersson’s own Synclavier, which he still uses for writing, as well as an assortment of vintage Ludwig, Slingerland and Zildijan drums and cymbals.

With other facilities such as the TAD Reference One, ATC SCM300, Genelec 8260A and Yamaha NS10 monitors, and a 24-channel CLASP system for tape recording, and most importantly, with a unique vibe and location, RMV has proved an ideal recording venue for ensembles of up to 50 musicians.