Building a high‑end recording studio has always been an ambitious goal. A studio is a complex organism, and substantial resources are needed to conceive a workspace which can keep up with the most critical and diverse of demands. It does not come as a surprise that many of the sound temples we have been showing in our Studio File series so far hail from a different and long‑gone era, when recording studios were either state owned or built by one of the few major record companies. These classic studios still thrive on their legendary names and their established facilities, but it doesn't happen too often that they are joined by new recording venues on the same scale and level of ambition.

Snap Studios, located in Manor House, North London, came about not as the result of a long‑held plan, but out of sheer opportunity — but that doesn't mean that its construction was short of experience, precise planning or meticulous preparation! In fact, Snap was conceived as a proof of concept.

London‑based retailers and distributors Funky Junk Ltd are among Europe's leading suppliers of recording equipment and services, and they have been involved in equipping and designing studio facilities all over the world during the past two decades. When managing director Mark Thompson heard that the space which eventually would become Snap Studios was available for lease, he was immediately intrigued. Having spent his entire working life in and around recording studios, he saw the potential of the space, and he took the opportunity to build a recording venue which would, he hoped, excel in all aspects, and which would serve as a 'shop window' for Funky Junk as well. 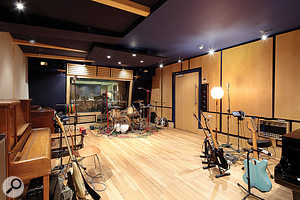 The live area in Snap Studio 1. 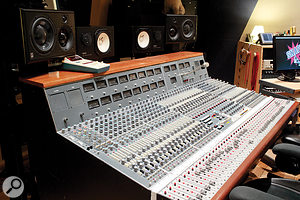 The control room in Studio 1 is based around a vintage Neve console. 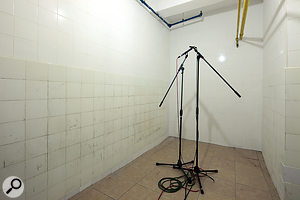 Not only is Snap full of rare outboard processors and effects, but it also features a real echo chamber. 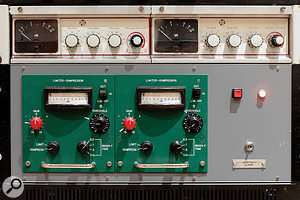 A pair of Pye limiters and two Decca compressors, which came from a mastering console in Nigeria. 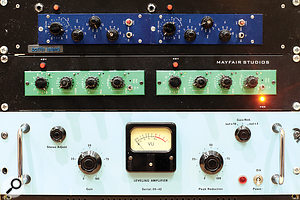 Rare outboard at Snap includes a pair of blue Allotrope mic preamps, two Rosser EQs which once belonged to Mayfair Studios, and an LA2A copy which came from Moulin Rouge in Paris. 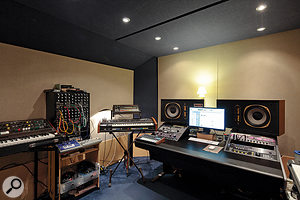 Studio 2 is suitable for editing and overdubbing, and it also hosts an impressive synth collection, including a Yamaha CS80 (left). 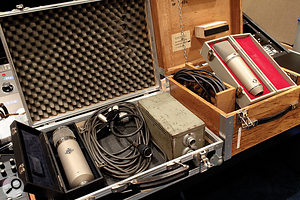 Snap is home to a number of desirable microphones, including a Neumann U47 that was used for recording Miles Davis by the previous owner.Snap Studios opened in early 2011, and in its short yet extremely busy history, its success shows that he, studio manager Marco Pasquariello and their staff must have made a lot of right decisions. Their work has garnered accolades including a Music Producers Guild Studio Of The Year award in 2013.

More Than Meets The Eye

When Mark Thompson secured the space it was remodelled entirely, and now houses Studio 1, with a 55‑square‑metre live room and a slightly smaller control room, as well as the much smaller Studio 2 and a few other facilities. Despite its comparatively 'comfy' dimensions, it is capable of hosting quite large recording projects, mainly due to its clever layout and the versatile interconnections between the various rooms. Interestingly, the building has a long musical pedigree. The premises were used by songwriter/producer Anthony Marshall and his firm Snap Management (hence the name of the studio) just before Thompson and Funky Junk took over the lease. But originally, in the early 20th Century, the building was home to the Boyd Piano Factory, owned by the same group as the Decca Record Company, who are said to have manufactured gramophones in Manor House at that time, quite possibly on the same premises.

Being a professional equipment broker, and an avid collector of recording kit himself, Thompson had the opportunity to equip Snap with a truly remarkable gear collection. But while we all marvel at impressive consoles, outboard racks and mic lockers — and Snap has much to offer in all those fields — there is a lot more to a truly professional studio build. Exciting equipment is one thing, but ultimately the sound quality that can be achieved in a given environment is determined by a number of much less glamorous factors, such as sufficient and clean mains power, the layout and quality of the cabling and grounding, room acoustics, and so on. Even more mundane factors can make or break the success of a commercial studio facility, such as ample and safe storage, easy loading and unloading of equipment, street parking... Thanks to Mark's awareness of all these issues and determination not to compromise, Snap was built to the same standards as big studios such as AIR Lyndhurst and Mark Knopfler's British Grove, employing the same methods and, often, the same contractors to carry out the work. The use of balanced mains power throughout and the Vovox silver tie‑lines between the rooms are just two examples of significant design features that are costly yet practically invisible.

The equipment and instrument collection at Snap features many rare and precious items, and most of the units have an interesting history attached to them. Studio 1 is centred around a 48‑input Neve 5316 console with 1081‑style mic preamps, a fully discrete desk built in 1972. Studio 1 also boasts pairs of Mayfair/Rosser EQs, Allotrope preamps that were once part of a console commissioned for Led Zeppelin's John Paul Jones, '60s Decca compressor/limiters rescued from a mastering facility in Nigeria, a rack of eight Focusrite ISA 110 mic pre/EQ modules, two Pye limiters and four Neve 2264 modules, and the list does not stop there. Reverberation is being taken care of by EMT 140 steel and 240 gold‑foil plates, a Lexicon 480L and one of very few real, tiled echo chambers remaining in operation in the UK. Snap boasts an enormous selection of instruments too, including a Bösendorfer Imperial 225 grand piano personally selected by producer George Martin for his AIR Studios in the mid­‑'80s. Unsurprisingly, the mic lockers include many coveted classics such as an AKG C12, the Neumann standards U47 and U67, as well as a couple of dozen dynamic and ribbon mics by manufacturers such as RCA, Beyer, Sennheiser and Coles.

To date, Snap's client roster encompasses illustrious names such as Kate Bush, Coldplay, Imogen Heap and the Kaiser Chiefs. However, a core aspect of Mark Thompson's vision was that the studio's rates should not be out of reach for independent or self‑funded artists, and Snap Studios have thrived by applying the very highest standards of construction and equipment in a mid‑sized recording facility.