State Of The Ark, London 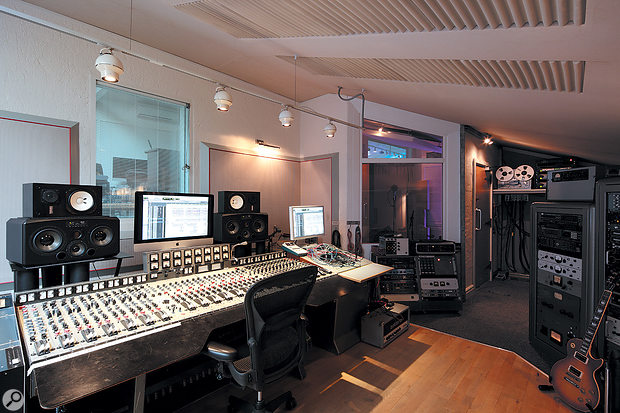 The State Of The Ark control room is based around a vintage EMI TG-series desk originally installed in the Pathé Marconi studios in Paris.

In the early days of pop music, virtually all recording venues were either state-owned, or belonged to one of the few large record companies, and it was not before the late '50s that the first independent studios appeared on the map. These were equally costly to build and to maintain as their corporate forefathers, and they catered to the same clientele, so it is no surprise that they had little in common with today's private studios. Since the 1980s, however, a new breed of high-end private studio has mushroomed. The advent of digital technology and the invention of new musical genres which were based on synths and samplers have made it feasible to create music production facilities that are not necessarily designed for maximum flexibility, but tailored exactly to one person's special requirements. 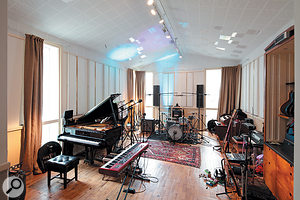 State Of The Ark's live room is home to an impressive collection of musical instruments.Today's private studios typically employ mainly a DAW and perhaps a small amount of 'boutique' analogue equipment, in setups that should sound familiar to many of our readers. But what would a private studio from the late '60s look like if it had been conserved in a time capsule? These thoughts come to mind immediately when visiting State Of The Ark, tucked away in a residential area in Richmond, Greater London. Though its design consciously looks back to the '60s, State Of The Ark has only been open to the public as a commercial studio for seven years, but it was conceived long before as the private workspace of singer-songwriter and record producer Terry Britten. 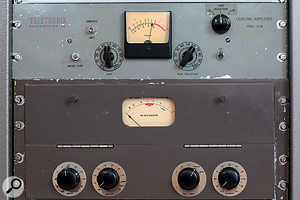 Rare outboard gear at State Of The Ark. Clockwise from top left: Teletronix LA2A and Gates SA39B valve compressors; EAR 825Q and GML 8200 equalisers and pair of Pye limiters; racked Helios input modules; and a Fairchild 670 stereo valve limiter.Born in Manchester, Britten entered the music industry in the '60s playing lead guitar with Australian band the Twilights. After the band broke up he moved to London, leaving his mark on many early '70s productions as a session guitarist, and he also began to write songs for other artists. 'Devil Woman', which he penned for Cliff Richard, was a UK top 10 hit in 1976, but even greater success was yet to come. Together with Graham Lyle, Britten wrote 'What's Love Got To Do With It?' for Tina Turner, earning the authors the Grammy Award for Song of the Year in 1985. (The song was featured in May 2004's Classic Tracks article: /sos/may04/articles/classictracks.htm) Terry Britten also wrote Turner's 'We Don't Need Another Hero' and made contributions to Michael Jackson's Bad album, as well as providing songs to artists such as Meat Loaf, Bonnie Raitt and Hank Marvin. 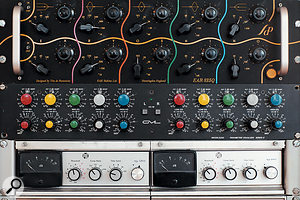 Around 1986, shortly after the great success he had with 'What's Love Got To Do With It?', Britten set up his own private studio in what used to be his garden shed. At the time it was centered around an Amek console and more conventional outboard, but based on his experience with the Amek and other contemporary SSL and Neve desks, he kept missing a certain soulful texture he knew from the earlier days of his career. Eventually Britten decided to go "backwards and not forward”, as his son Dan, who manages the studios today, puts it, and he acquired the EMI TG12345 console that was previously installed at EMI's Pathé Marconi studios in Paris. The console was fully refurbished and modified with insert points and direct outs on each channel, for better interfacing with a modern studio layout. 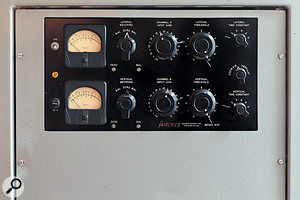 Today the desk is accompanied by a staggering collection of vintage outboard equipment: most of this has been added to the setup in the past 20 years, yet the strong focus on valve equipment and early transistor kit makes the studio appear as if everything was put together around 1970. The TG desk is accompanied by an eight-channel TG sidecar that was built from spares from the original TG MKI console that was installed at Abbey Road, and recently another sidecar has been added to the main desk, based on eight Neve 1095 modules. 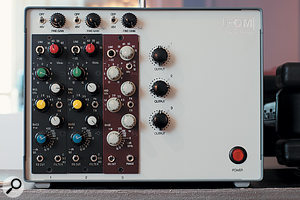 The outboard equipment is equally impressive, including vintage valve compressors such as the Fairchild 660 and 670, an RCA BA6A, original Teletronix LA2 and LA2A units, a chunky Gates SA39B and a pair of EAR 660s as well as solid-state counterparts such as a pair of rare Pye limiters. But the studio also keeps a number of precious mic preamps and EQs, including different Helios input channels, two dozen Telefunken V72A, V76 and V77 modules, two pairs of Pultec EQP1A and EQH2 equalisers, and an EAR 825EQ, to name just a few of the most interesting pieces. All this outboard is paired with a well-equipped mic locker holding Neumann valve classics such as U47, U48, U67 and M49, AKG C12 and C12A as well as RCA 77DX, Coles 4038, Alec 639 and AEA R44 ribbon microphones. 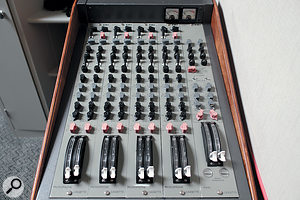 Eight channels of additional TG-series modules are available in this sidecar module.With all this beautiful vintage kit on tap, the name State Of The Ark seems very apt, reflecting not only the state-of-the-art quality of the equipment, but also reminding us of Noah's Ark: it's as if all kinds of vintage equipment had been gathered at the studio in pairs to be saved for posterity! Terry Britten used the studio mainly for writing, but parts of productions he contributed to were also recorded here, such as portions of Tina Turner's Twenty Four Seven album, which was released in 1999. Eventually, more and more people who had worked with him called again, asking to book the studio for their own recordings. 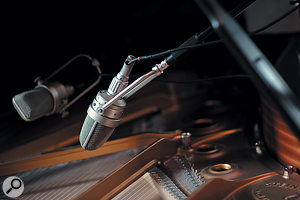 State Of The Ark's impressive mic collection includes this pair of Neumann M49s.According to Dan Britten, opening the studio as a commercial recording facility seemed a natural progression when Terry Britten decided to work less. Much of the current layout, such as the equipment, the rather spacious live room and four isolation booths, already existed when the studio was still a private workspace. The main challenge transforming a one-man studio into a versatile commercial recording venue was adding infrastructure such as a sufficient amount of tie lines between the control and live rooms. 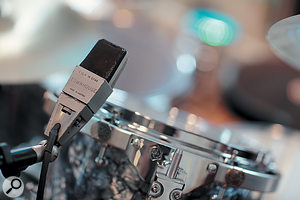 A rare predecessor to the familiar AKG C414, this C12A valve mic originally came from Townhouse Studios.State Of The Ark has attracted a number of high-profile clients who all seem to be enthused by the studio's quite unique combination of rare vintage equipment, a huge instrument collection, its comfortable home-studio atmosphere and its location in one of the most beautiful boroughs of London. Recently, London Grammar, Kasabian, Noel Gallagher and Mirwais have worked at State Of The Ark, and the client roster also boasts names such as Alan Parsons, the Verve, Mumford & Sons, Kylie Minogue, James Blunt, Nick Cave and the Bad Seeds, and many more.

Your Questions Answered
5 days 7 hours ago.