Sheffield was alive with the sound of electronic music on Saturday, as the inaugural SynthFest UK got underway at the university's Octagon Centre. 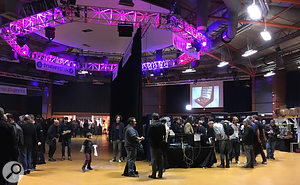 Organised by Sound On Sound in partnership with the Sensoria Festival, SynthFest UK is the first UK festival devoted entirely to synthesizers, and brought together synth manufacturers, retailers and musicians from all over the country. Given the current renaissance of hardware synthesizers, it's no surprise that the event proved to be very popular indeed, with attendees travelling from all over the country for the occasion.

The queue of people entering the building at eleven o'clock were greeted by a cacophony of electronic noise, as dozens of machines blooped and blurbled for prominence in the main hall. A full programme of seminars on synth-related subjects was running throughout the day, both in the main hall and in the lower floor. Also in the lower floor were rooms curated by Korg, Yamaha and Source Distribution. In the Korg room the Japanese synth stalwarts were displaying their full range of synths, including the brand new Volca Kick and desktop ARP Odyssey modules. Yamaha were showing off their new Montage synths, as well as the bijou Reface range. And in the Source Distribution room visitors were able to try out Arturia's as yet unreleased MatrixBrute synth and play the newly reissued Minimoog Model D. 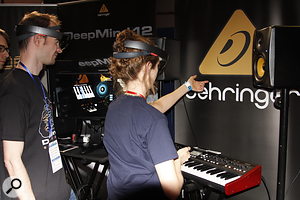 Back upstairs, the right-hand side of the Octagon's large main hall was crammed with synth manufacturers and retailers, and attendees were able to get hands on with the latest products from a host of different companies. Behringer were causing a stir with their forthcoming DeepMind 12 polysynth and hinting at the shape of things to come with a prototype Augmented Reality controller system. British manufacturers Modal had a large stand displaying their full range of synths, including the Modal 008 eight-voice polysynth, and at an adjacent stand Studiologic were exhibiting their new 'Sledge Black', a decidedly more sombre version of the original, bright yellow Sledge.

Unsurprisingly, modular and especially Eurorack, was well represented, with companies such as Analogue Solutions, AJH Synth, Studio Electronics, Soulsby, Expert Sleepers, Thonk and Abstract Data displaying their wares. There were plenty of instruments to try out, and In many cases it was possible not just to try a module, but to speak to the man who made it.

If you wanted to grab yourself a bargain or try out the latest bit of gear, there were plenty of retail stands from the likes of KMR Audio, Rubadub, Red Dog 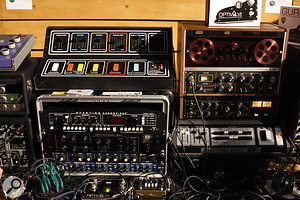 Music and Sheffield's own Rich Tone Music. Trade seemed to be roaring, and many a happy punter was seen leaving the building with a new synth under his arm. There was also plenty of vintage gear in evidence, not least on the crowded Soundgas stand, where aged rhythm units and ancient tape delays were piled on top of one another and wired up to obscure Japanese drum machines.

The left-hand side of the main hall was devoted to the 'Modular Meet', at which guests could show off their own modular synths. 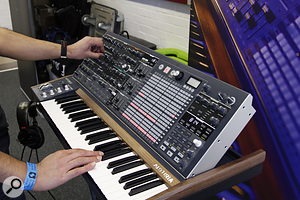 There was a huge variety of systems on show, some very rare and unusual indeed, and the owners were all happy to talk about their synths and let attendees try them for themselves. Human League frontman Phil Oakey was spotted chatting to Ian Boddy about his Eurorack system and synth aficionado Matt Berry could be seen checking out the extremely rare Moog percussion modular.

Seminars were running throughout the event and covered subjects as diverse as the Ondes Martenot and Max For Live, whilst others offered demonstrations of Mi-Mu controller gloves and the Moog Theremin by Mark Doty from the Bob Moog Foundation. Most of the seminars were standing room only — and not much of that — and certainly seemed a very popular part of the event.

Work has already begun on organising next year's SynthFest UK, and if the first one is anything to go by it's going to be a roaring success. Watch this space…