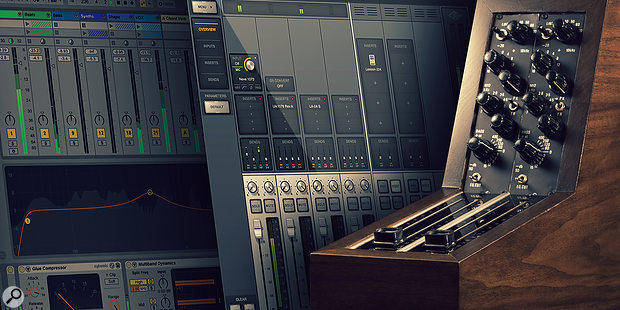 Universal Audio have released UAD Software version 9.5 and, with it, three new plug-ins for their UAD-2 plug-in processing platform.

The first is an exacting model of a channel strip from the rare Helios Type 69 mixing desks designed for Olympic Studios in the 1960s. The Helios Type 69 console was at the center of hundreds of iconic albums by Led Zeppelin, The Beatles, Jimi Hendrix, and Pink Floyd, to Bob Marley and the Wailers, David Bowie, Black Sabbath, and AC/DC. The Helios Type 69 Preamp and EQ plug-in ($299, or $199 to upgrade from the legacy Helios Type 69 plug-in) recreates not just the passive three-band EQ but also the feedback-style 70dB preamp and Lustraphone mic input transformer. The plug-in also supports UA’s Unison preamp technology, with real-time modelling of impedance, gain staging and circuit behaviour.

Next up, the Brianworx A/DA Flanger ($149, or $99 for owners of the UAD A/DA STD-1 delay plug-in) is an officially licensed emulation of A/DA’s legendary analogue flanger pedal. Featuring mono, stereo and mono-to-stereo modes, it allows you to switch between odd or even harmonic emphasis and models both the original 1979 pedal and the modern reissue.

Finally, the Friedman Buxom Betty Amplifier ($149, or $99 for owners of the UAD Friedman Amplifier Collection) is a detailed emulation of this boutique 50W, EL34-powered guitar amp. Developed by Brainworx and fully endorsed by Friedman, the plug-in adds a comprehensive effects rack and 100 different recording chains with multiple speaker cabinet responses.