Every now and again the worlds of philosophy and mathematics palpably collide with the world of synthesis, reminding us all of the conceptual depth inherent in electronic instruments and their rather wonderful relationship with some of the fundamentals of physics. The Tetragrid from Manifold Research Centre, the one‑man operation of Italian developer Aimo Scampa, is one such module. Scampa cut his teeth working for maverick Glaswegian developer Instruo, so it follows that his solo work denotes a knack for lateral thinking. This is partly expressed by his clear fondness for the surreal and the absurd: “An Einstein‑ring of a diameter of ≈5 parsecs has appeared on the outer regions of Perseus Arm, surrounding the Crab Nebula,” reads the Tetragrid’s blurb. “We think that something passed through. Hail the donut.” Any questions? 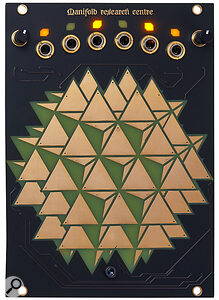 The premise of the Tetragrid is, at least on the face of it, simple. “Since I’m really into geometric patterns, I wanted to use this circuit to make an ode to aperiodic geometry,” explains Scampa of the module. “Say hi to the first magnetic board gate sequencer.” The Tetragrid’s interface consists of a geometric shape (specifically a two‑dimensional visualisation of a polytope cross section, if you’re interested) with six outputs. Each one of the shape’s constituent triangles is connected to a ‘cell modulation node.’ Applying any number of conductive elements (like fingers) to various points on the module’s conductive surface creates connections between those circuits, resulting in flurries of trigger combinations from the various outputs.

The Tetragrid is inspired by two other veritable synthesist‑philosophers: its magnetic matrix design by Meng Qi and its circuitry by Peter Blasser, aka Ciat Lonbarde. Blasser, in his rather brilliant thesis ‘Stores At The Mall’, describes his ‘Rolz‑5’ design as a “free‑jazz drum machine”, and I can think of no better description of the Tetragrid. It’s quasi‑random — but not fully random. And there its major strength lies. Erratic and unpredictable in the first instance, the Tetragrid soon settles into an odd sort of consistency; it creates looped phrases of gates that transcend the bounds of time signature, rhythm and tempo to play by no rules but its own. Key to this consistency is the ability to place magnetic, pawn‑like metal ‘pins’ on the surface of the module, keeping those delicate cross‑connections in place. One must choose their moves carefully, since even a small adjustment or inconsistency can send the gate patterns into all kinds of varied madness. As one spends time with it, rhythmic motifs begin form and can be adjusted. It really is, in Peter Blasser’s words, free jazz.

I daresay this has the potential to change the game somewhat when it comes to controlling various elements in your system, and perhaps even aspects of your approach itself. Suffice to say, a vast majority of Eurorack sequencers, clock dividers and function generators encourage an ostensibly gridded, regularised approach. While there are no shortage of random voltage sources to choose from as well, there aren’t many modules out there that successfully work in between those two extremes, to say the least. Of course, it isn’t difficult to fetter the Tetragrid into the context of a more conventional tempo or rhythm with the help of a few VCAs and clock‑sync’ed gates; in this respect I found it highly enjoyable to weave elements of regularity and chaos into system‑wide patches, from subtle ‘slop’ around more locked rhythms to bursts of gates at certain points in my sequence. Usefully, two of the Tetragrid’s outputs have pots to control their tempo, so there’s the potential for some broad‑stroke adjustment if needed.

It’s difficult to fully adjudicate when it comes to the Tetragrid, because there simply isn’t much to compare it to. One query is to do with its conductive surface’s durability: sliding the metal pins around it resulted in some visible wear after a while, though this didn’t seem to affect its functionality. Occasionally I found myself unable to achieve a regular workflow, moving pieces around its surface more or less at random and often unable to repeat ideas. Overall, though, it receives a whole‑hearted endorsement from me. It’s playful, philosophical, creative and uncontrollable in all the right ways; all the things that make Eurorack great. Do read Peter Blasser’s thesis if you want to learn more about Rolz and the Tetragrid’s concept, and a visit to the Manifold Research Centre website is worth it just for literature. Hail the donut.