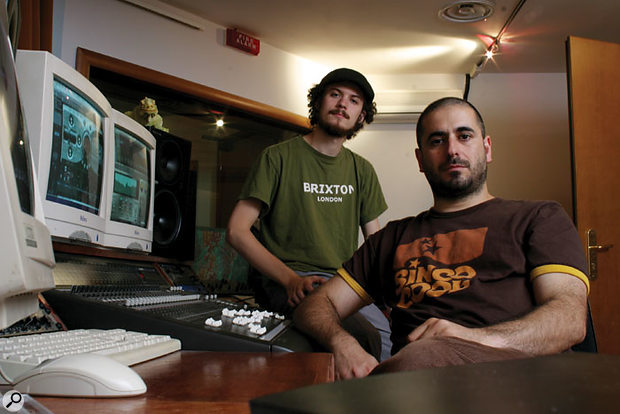 SOS visits reader Andrea Terrano, who has turned the empty shell of a South London industrial unit into an impressive studio complex.

Andrea Terrano is a guitar player, producer and studio engineer who describes himself as "Italian with a hint of Russian" but has lived in Brixton for around half his life. He's clearly very passionate about music and recording, as he's had a number of small studios over the years, as well as finding time to play jazz with his own band. His latest venture is Iguana Studio, a small facility set up in an industrial unit (an ex-wartime bullet factory!) near the centre of Brixton and masterminded by Andrea and his two colleagues Tom Linden (producer/consultant) and Ruben Engzell (engineer and DIY maestro!). As Andrea explains, the name Iguana came about around the time of his first studio project (set up in his flat) where the previous occupiers used to keep a live iguana. The eagle-eyed might spot a nodding Iguana on top of one of his monitor speakers — posing as a monitor lizard perhaps?

When Andrea took over the premises, it was mainly empty shell with just a couple of rooms at the back. He took the unusual step of ordering everything he needed to build the structure of the studio from Italy. Even the plasterboard was shipped from Italy, as Andrea worked out that it would still be cheaper! All his studio doors are made by Silente, a supplier to the hotel industry, and as well as being good sound isolators, they also have the necessary fire resistant-attributes, although persuading the local Fire Inspection officers of this when the documentation had to be translated from Italian proved difficult! The studio and control-room doors are all double-door 'airlocks' to improve sound isolation. The doors have compression seals on three sides, and when they are closed, a guillotine-like seal at the bottom of the door descends to complete the 'circuit'. As you'd expect, they were expensive and accounted for a significant part of the overall budget. 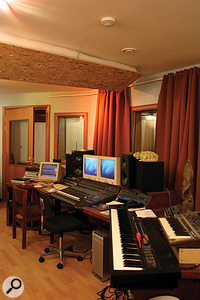 Control room one is centred around a Mackie dBb desk and twin-monitor Logic setup. Windows look through to the two live rooms. Note the unusual inverted apex acoustic treatment above the mixing position.Photo: Richard Ecclestone

Andrea hired an Italian foreman to co-ordinate the building work, but occasionally pitched in with the labour himself, as well as overseeing the project. He confesses that he made a few logistical mistakes, and also ran into problems with builders who came up with unachievable estimates and then quit mid-job, but the worst part of the process was apparently when everything turned up from Italy on the back of an articulated lorry, and by the time he'd got it all loaded into the unit there was no space left to start building anything! After much swearing (probably in Italian!) and hard work, these obstacles were overcome and with the help of friends he got the building work completed and installed his studio.

All the new internal walls in the building are built onto an expanded-metal framework rather than onto traditional studding, as the former is lighter and easier to work with, and has no fire risk attached to it. Each partition wall is panelled with two layers of half-inch plasterboard, behind which is a cavity stuffed with Rockwool, then two more layers of half-inch plasterboard. All this is repeated again, to provide a 40cm-thick wall. One of the layers of plasterboard is also coated with a sheet of lead in the studio area. Andrea is keen on conservation, improvisation and cost-saving, so his laminate flooring was laid on a half-inch mat made from recycled tyres, again from Italy. The windows between the studios and control rooms are made using two widely spaced glass panes, where the individual panes comprise two layers of glass, and he's followed the traditional technique of making the windows non-parallel. A silica gel desiccant material has been scattered in the cavity to absorb moisture, and the glass itself is simply mounted between neoprene strips that form a resilient gasket.

The studio is set out as two control rooms, one large and the other more compact, both of which connect to two live areas plus a vocal booth. While no expense was spared in getting the building right, a lot of improvisation went into taming the room acoustics at minimal cost, and Andrea admits that this is still a work in progress. However, he and fellow Iguanas Tom and Ruben have come up with a few novel solutions and aren't afraid to build something new if there's a chance it might do the trick. 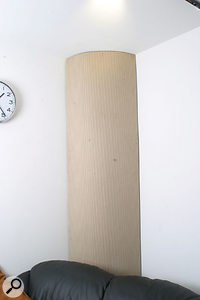 The only other formal bass trapping in the room is a quadrant-shaped structure running up one of the rear corners of the room.Photo: Richard Ecclestone

The first thing I noticed in the main control room was an inverted apex above the mixing seat. This is made from two sheets of board, into which large holes have been drilled. The structure is suspended from the ceiling by short chains and the apex is a simple hinge. Dacron wadding has been used behind the panels, in the hope that the structure would work as a bass trap as well as a non-parallel ceiling surface, but on inspection it turned out that Andrea had only used one layer of Dacron. To have any effect at low frequencies, I felt he ought to try filling the whole apex shape with Dacron, foam or Rockwool. This was already on his list of things to try.

The only other formal bass trapping in the room is a quadrant-shaped structure running up one of the rear corners of the room (see photo, right). This comprises a curved piece of MDF (the type with lots of grooves cut into it, to enable it to bend easily) on a simple wooden frame, with a couple of shelves inside to prevent the internal damping material from sinking to the bottom. In addition to Rockwool, Andrea has also employed old clothing and just about anything else he could lay his hands on to fill the cavity behind the MDF. He has also left a small gap at each side of the MDF structure where it meets the wall, so that the chambers are not sealed from the air. He felt intuitively that this would make the trap work more effectively.

At the back of the room are absorbent panels, but rather than going for the usual foam, Andrea has filled wooden frames with Rockwool, covered this with fabric, then finished the front surface with the type of fretwork MDF used on radiator cabinets. This provides a bit of HF scattering as well as mid- and high-frequency absorption, and also looks pretty good.

The main control room is centred around a Mac running Apple's Logic, mixed via a Mackie d8b desk, which also serves as a hardware control surface for Logic. Monitoring is via a pair of Mackie HR824s which were set for 'full space', but on my suggestion Andrea tried them on half-space, which made the bass end seem a little less unruly. There's little hardware in the studio, as Logic has such good plug-ins, but the Lexicon PCM91 still has pride of place, alongside some cost-effective Behringer units that still get used from time to time. 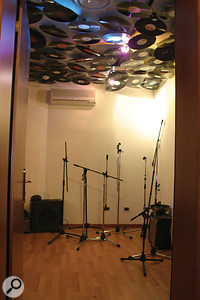 As the studio is quite wide, the sound is pretty good even with no treatment on the side walls, although Andrea plans to add more panels there as soon as he can. As it is, the room is still a little on the live side of neutral and more bass trapping would also help. Jake Telford, an acoustic designer who is helping Andrea, would like to turn the whole rear wall of the studio into a trap, a traditional solution in studios where the rear wall is closer to the listening position than might be ideal. However, this might be too expensive to do right away, so I suggested that Andrea use four-inch foam to fill the spaces between the rear-wall panels, where guitars are currently hanging. Conventional corner traps running the length of the back wall where the wall meets the ceiling could also help, and Andrea has come up with an ingenious alternative to foam corner traps. On his last trip to Ikea he discovered cylindrical foam cushions with a fabric cover, that cost around £10 each. These can be hung in corners to provide low-frequency trapping, or from side walls in rows (rather like closely-spaced boat fenders) as an alternative to foam panels.

The first thing you notice in the first live room is that the only permanent acoustic treatment is provided by vinyl LPs screwed to the ceiling through short lengths of plumbing pipe cut at an angle, so that the LPs are not parallel to the ceiling. A tastefully covered mattress provides a piece of movable treatment, as does a thick rug. Future plans include providing fixing points for either heavy curtains or duvets, so that the room can be damped down when necessary.

The vocal booth is the most treated room in the studio, and probably rightly so. The entire wall behind the vocal position is a shallow rockwool trap with more fretwork MDF on the front, giving the whole thing the appearance of a confessional! Thick curtains cover the access doors on either side, giving an adequately controlled sound, though there's no treatment on the ceiling. 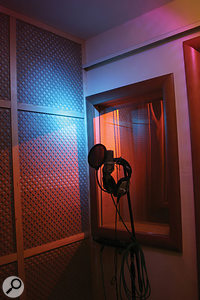 Vocal booth: the entire wall behind the vocal position is a shallow rockwool trap with more fretwork MDF on the front.Photo: Richard Ecclestone

At the other side of the vocal booth, and also with a window into the control room, is a second live room with no acoustic treatment at all. This produces a respectable live drum sound already, but to make it more flexible Andrea is planning to build movable absorbers that can be used when needed. I suggested using the old standby of a panel that's reflective on one side and absorbent on the other, so that turning it around creates either a more controlled acoustic or a more live one for acoustic instrument recording. The cheap and cheerful method is to use sheets of three-quarter-inch ply or MDF with acoustic foam fixed to one side.

Control room two has unfortunate dimensions, being almost exactly as wide as it is high and around twice as long as it is wide. The monitors here are HHB Circle 5s and the main recording system once again uses Logic. The only acoustic absorption, other than a large sofa, is another pair of fretwork and Rockwool panels on the side walls, but as the depth of these is only around one and a half inches I felt they'd work better with four-inch foam stuck on top at the side 'mirror' points, to further deaden side-wall reflections from the monitors in the mid range. Andrea had also added a wooden diffuser to the back wall, to provide some mid- and high-frequency scattering, but he said the jury was still out on how effective it was.

With A Little Help From His...

Andrea has succeeded in building a very impressive-looking studio complex from an empty industrial unit shell, but says he couldn't have done it without help from his friends, colleagues and fellow musicians. The acoustics of the studio are very workable already, but Andrea and his crew are keen to experiment with ways to improve them further. If the idea of using vinyl records as reflector/diffusers and the studio's new use for Ikea cushions are anything to go by, the solutions should be both eye-catching and original!

Iguana Studio have a web site, at www.iguanastudio.co.uk, on which you can find contact details, studio background and information on all the people who have helped to make the studio a reality.