This month Big George wonders: has music lost its identity?

Once upon a time, not so long ago, most people who listened to music knew exactly who they were listening to. Some of us even knew what strings the bass player was using and how often he or she changed them. Even the place where an album was recorded or who the drummer was could trigger a blind purchase or make that record an essential addition to your collection. Of course, that did lead to a sizeable chunk of said collection being consigned to the 'played only once' section, but even that was a vital step in forming your taste.

One thing I was taught by the man whom I spent a couple of years following like a shadow (although, as I recall, he never showed me a single lick, technique or exercise) was that it's important to teach the next generation of musicians. Mozart did it to earn money, Louis Armstrong did it just so that he could play every waking moment — even the Bay City Rollers did it, although they used Big Jim Sullivan. What I'd give to see those snippets of TV magic again. What? You've no idea what I'm on about? 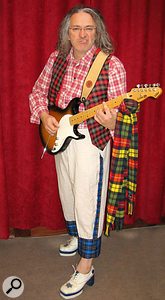 It's official: the oldest Roller in town...

Back in a mythical time we refer to as the '70s, there was a manufactured boy band that wore tartan clothes too small for them and pretended to play guitars and drums — similar to today, only now the clothes are too big. Anyhow, the band, who were hated by all the boys and adored by exactly half the girls, were given their own TV show (back then, everyone in the charts got their own TV series — Lulu, Cilla, Dusty, Cliff, Val, Nana, even Engelbert).

On these shows the artist sang a few of their own songs, murdered other people's songs and made themselves look stupid by trying (and failing miserably) to act in little sketches. Occasionally there'd be a puppet involved (other than the band), but the Rollers had a section with the man who played the guitar on their records. Of course, they didn't mention this fact to their adoring audience! Every week, Big Jim (who, by the way is a legend, but was about as fanciable to the teenybopper set as John Prescott) basically showed off his blistering guitar chops, and everyone whooped! It was a time when, even if the audience wasn't aware that the people masquerading as musicians were bogus, they at least knew who the people were and they were hip to what constituted the making of music.

It ain't necessarily so these days. I was with a bunch of teenybopper-aged school-kids the other day, all plugged into their various multi-functional MP3 entertainment consoles, and I asked what they were listening to (as they seemed to listen 24 hours a day). Apart from the odd Eminem and Beyonce track, not one of them knew what they were listening to — it was just tracks they had downloaded or taken off their mate's system. Even more disturbing was the fact that none of them had bought any of the music. In fact, they thought it was hilarious that I spend a fortune every week buying records! And in a way they're not wrong: tragically, half of the money I give to multi-national companies goes on buying records I've already got, sometimes for the third or fourth time. My record (sic) is six copies of Electric Ladyland (and if anyone is interested in why I have six copies of this particular gem, I'll be explaining my sad behaviour in a future issue, as well as examining how the music business has survived on milking re-issues for the past however many years). I've not played even one of them this year, although that might change after I finish getting to the point of this column, which is...

What future is there in making music? (Apart from it being its own reward, of course...) We live in a world where the charts are almost exclusively controlled by a couple of vested interests (and we'll be poking them in the eye as the months go by) and where retail sales are dictated by lifestyle magazines. For instance, despite the embarrassingly low sales of the last few Posh Spice records, if she were to release another (please God, NO!) she'd get acres of shelf space and tons of pre-release airplay. Don't believe me? See Paris Hilton. Add in the freebie Internet downloads and the same old classic tracks being given away free with Sunday newspapers and you might be forgiven for getting the impression that music is a worthless commodity.

What's the up-side? Well, if you're one of the lucky ones, you could be writing or recording with this week's flavour of the month, although that's a double-edged sword, as it pays well but the job satisfaction must be poison. Likewise, there's the tribute-band industry, which also pays well. You might even get lucky and become the next James Blunt — although it depends what kind of luck we're talking about here!

Slashed your wrists yet? No? Good! Because there is hope, and many pound coins to be made. Never in the history of history has there been as many opportunities to be a music service provider. They may not all be in the multi-platinum concept-album business, but if you have your eyes and ears open, and can deliver, there is a living in music waiting for you. Where? Keep reading: over the next few months I'll provide the blueprints. It'll be down to you to make the plan actually work.