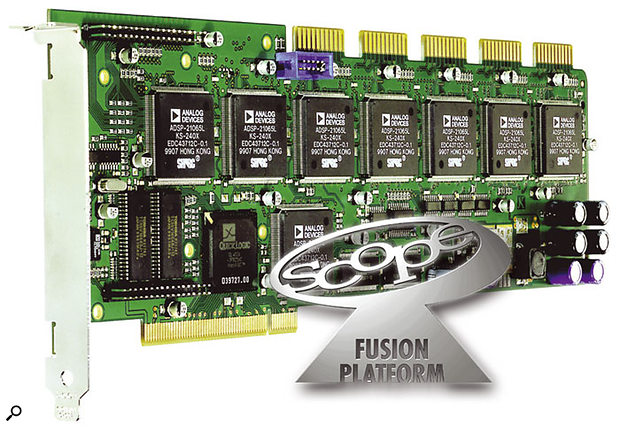 Having been an SOS reader for over two years, and a Creamware user for three, I read Mark Wherry's review of Creamware's SCOPE system (SOS June 2003) and felt proud of my Creamware setup — but when I finished reading it, I came back down to earth. I could only conclude that the SCOPE system is as praised as it is because Mark did not give it a truly exhaustive test. I have problems with clicks and pops which may be the fault of my system, rather than specific to my Creamware gear; but there are also many Creamware bugs which have still not been corrected after many software version updates. I wish I had the stable, fast and reliable system Mark describes. Please either run an exhaustive test, correct the review to be more objective, or simply prove me wrong (please, please prove me wrong!).

Managing Editor Matt Bell replies: I'm sorry to hear about your problems — it does sound as though you've been very unlucky with your system. Regarding Mark's review, we do write about problems that we find during reviews, as you'll know if you've read SOS for a while. The reason Mark didn't write about any such problems is that he honestly didn't find any during the review.

I was responsible for editing the SCOPE review, and I specifically asked Mark about various aspects of the flawless bill of health he gave the system. Our view is that when our reviews express strong opinions about a product (positive or negative), it should always be clear from the text why the reviewer holds this view. Mark stuck to his guns, stating several times in response to my queries that he hadn't encountered any problems, and also standing by his description of the Minimax as the finest Moog emulation he'd heard.

Now, you may say that he didn't have the system long enough for the bugs to become apparent. But he had the system for nearly two months, and that's about the longest our reviewers ever have with anything we test. Any longer is just not practical, and anyway, this is quite long enough to turn up any serious flaws.

If that's not enough to convince you, I can tell you that what Mark said at the end of the review is true — he liked the Power Pulsar card so much that he took it with him when he moved to the States recently, which he wouldn't have done if he'd had serious problems with it. Coincidentally, he now works at a studio in California which houses one of the biggest SCOPE systems in the world (Media Ventures, Hans Zimmer's company). Mark told me recently that the SCOPE systems there are left on 24 hours a day, and haven't crashed since he started working there.

Of course, this doesn't assist you to solve the problems you're experiencing, but I hope it makes you feel more confident about our SCOPE test and our review procedures.

Caught By The Buzz

I'd like to share my experiences of tackling a severe buzzing noise in my home studio. Although the problems I've had are highly unusual and the same thing is unlikely to happen to many others (at least I certainly hope so), perhaps your readers will be able to learn something from my story.

I recently moved into a new house, and when I finally got round to setting up my recording gear, I encountered the worst buzzing noise I have ever experienced. I play my guitars through a Line 6 Pod which is fed directly into a Fostex VF16 digital multitracker, a setup which had worked without any problems in other houses. In order to work out the source of the interference, I purchased a simple battery-powered headphone amp to check if the buzzing would persist on equipment that wasn't plugged into the mains, and it did. I then attached an old pickup to the input of the headphone amp to form a home-made hum detector, and carried it around the house trying to locate the source of the interference. I discovered that the buzzing was at its loudest in the cupboard under the stairs, where the mains power enters my house and where the electricity meter and fuse box are located. After investigating further, I realised that the interference was also coming from all the mains wiring near to this location. When I shut the mains power off, the noise still persisted near the wiring between the fuse box and the ground main.

The noise was so loud that, even two walls and a ceiling away from the fuse box, I simply couldn't play my instruments, let alone consider recording anything. After discovering what seemed to be the root source of the hum, I called out an electrician to examine the meter (which proved to be working fine) and he advised me to get in touch with EDF Energy, who are the national body responsible for ensuring the proper and safe connection of all properties to the mains. I called them to explain the trouble I was having, and they put me in touch with a special division of the company which deals specifically with electromagnetic radiation. Two engineers then called to take readings of the radiation levels in my house. Apparently, normal levels should fall between 0 and 1 units in a residential property (though I'm not sure what the units were), varying by a few tenths as you approach electrical appliances or lighting. The engineers were rather shocked when they discovered readings in my house soaring as high as 24.6!

The engineers left completely perplexed, advising me that a specialist engineer would have to examine the house. He came the following day. After various tests on the wiring and earthing loops, he came to the conclusion that, somehow, a current was flowing from the mains grid into the household earthing loop. The current was not large enough to cause electric shocks from the pipework, which forms part of the earthing loop, but was great enough to cause the levels of electromagnetic radiation detected. Essentially, the earthing loops within the house were generating an electromagnetic field! As the central heating forms part of this loop, the field covered the whole house (which explains why I couldn't get away from the interference).

Surprisingly, even though the current flowing into the earthing was not dangerous and the electromagnetic field was within legal limits, the engineer made a call to his depot to get the road dug up outside my house so that he could try to fix the problem, though he admitted that this was partly because it was such a unique case that he was too intrigued to leave it alone! After a couple of hours of digging and some rewiring, the noise was reduced to a mild humming, no more than you'd expect in any other house, and easily removable with a little noise reduction. I'm still waiting for the road to be filled in again, but I don't really care — I can record music again!