Matt Ward (MW): "This demo doesn't have the best production, which makes it difficult to tell how good the female vocalist actually is. Having said that, I can hear that she has quite a plaintive voice.

"Setting aside the problems with the level of the vocal, it is just a demo, and there is enough quality and melody in there for it to be interesting. I think it is good that they have included just three tracks which aren't too long, and there is quite a lot of variety within them. Songwriters often have a tendency to make their tracks adhere to a particular style, or to let them progress at just one pace throughout, but FBI have avoided those sort of pitfalls. Their arrangements are nicely structured and build well, adding extra instrumentation gradually. The music has an atmospheric feel, but it is reasonably tuneful at the same time. I'd like to see them live to see what they are like in that context, because they seem to have quite a powerful sound on the evidence of the demo.

"They haven't gone over the top in terms of the demo packaging; there's just a plain CD and a nice single sheet of information about the band and the demo, which is fine. Overall, I was impressed."

John Gummery (JG): "The vocals lack clarity, and I would have liked to hear a bit more presence on her voice. They have done a lot of production work and have used many compressed sounds, so even though the tracks seem to change in volume, the meters don't change. It means they have taken care to make sure all the layers of guitars are at a constant level, which is good.

"All the tracks started off with some ambient soundscapery before the introduction of what sounds like a live band playing the main part of the song. It makes for a rich, nicely varied feel to the demo, and it would be really impressive if they can reproduce it live as well.

"Their sound reminds me of the band Garbage but, having said that, they don't really fit into any one particular genre."

Slim (S): "Their penchant for long intros makes me think that they really want to be an albums band rather than a singles band, and I can imagine their intros working well at the start of an album, but it really annoyed me that they used the same trick three times in a row.

"In terms of style, I felt there was a trip-hop vibe to it, but I swear there was a Black Sabbath riff going on in there somewhere, so I don't think they are clear about what they want to be.

"The songs are interesting, although they sound a bit dated. I wanted to hear the vocal more clearly and I wanted it to have much more character. The problem might be that the production is getting in the way of the performance.

"Having read the supplied information, it surprises me that they've made a virtue out of of it being an analogue recording, because I thought it sounded quite hard, and not at all what you would expect from an analogue source. If I was an A&R man, though, I would check them out on the basis of this demo."

PL: "I thought this was quite good. It sounds very much like off-the-wall film music to me. It has loads of personality and it doesn't take itself seriously, which is a positive thing. The film music feel probably comes from the fact that the tracks are instrumentals. It's difficult to see how he could add vocals or develop these tracks in a conventional songwriting sense, really, so it's probably better that they remain instrumentals. 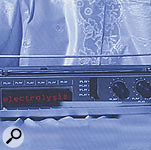 "The unusual start, which was mocked up to sound like he'd accidently recorded himself loading a cassette machine, was a good way to begin the demo, because we were all wondering what was going on. Then the bass came in and dropped out again, which made us wonder even more. I saw from the notes that he's using a Portastudio, so at first I began to think that it was a dropout on the tape, but when the whole track starts for real it sounds really grungy, and then you can immediately see what it is all about. It's like he's throwing the paint on the canvas, so in that context, even the flaws in it are OK. I liked the cover art, too."

S: "I think the misleading intro is potentially a bit dangerous, because a ruthless A&R type probably wouldn't have listened as far as the proper start of the song before consigning it to the bin. It did take me by surprise, though, and I liked that aspect of it.

"In terms of the production, it is raw and needs a bit more work, but at least there is a bit of bass in there. I can appreciate what he's trying to do — he reminds me of a modern-day Frank Zappa revelling in his wackiness."

MW: "It reminds me of the music for a cheap horror movie; I didn't think it was amazingly good. There is little or no song there and it is very heavily sampled, which puts me off a lot. It is also aggressively compressed, although that is not necessarily a bad thing for a demo. I do think it shows some potential though — the rhythms, in particular, are interesting. It certainly wasn't what I was expecting after looking at the cover artwork."

JG: "He should be commended for taking risks, because he doesn't seem to have tried to work within any stylistic limits. I can imagine the second track being used on some quirky, scary film soundtrack because it's really unnerving.

"There was definitely a Frank Zappa-style guitar riff thrown in for a couple of bars. It's also interesting to note that we're not changing the volume between the demos we're listening to, and yet his track stood out against some of the others because it appeared much louder. I don't think it sounds over-compressed, either; I think it has a sense of light and shade dynamically. I think there's some evidence of good production and arrangement techniques here."

MW: "According to the sleeve notes accompanying this demo, there are three members of the band, but the third member works with 'visuals and projection'. I think this really needs to be heard in a club with that visual element for it to work properly — it falls a bit flat listening to it in a room.

"The first track is more of a collection of noises than it is a piece of music, and, in terms of structure, it just changes wholesale from one idea to another. The beats are a little bit weak, even though the band are attempting a drum-&-bass-style approach, which obviously requires a strong, tight rhythmic basis.

"The second track has a lot more of a song to it, but the vocals suffer from some very violent and unpleasant sibilance effects.

"I think they definitely have potential and, overall, I do like the demo. I think it works best as a showcase of their atmospheric musical style, really, but no more than that."

JG: "The second track is definitely the better one of the two, although the bottom end isn't punchy enough in either of the two songs, and it's worse in the first. I don't know what they mixed it on, but poor monitoring could be responsible for the weak bottom end.

"On the second track, I found the sibilance on the vocals very distracting. Of the two on the CD, though, I'd like to hear them develop the idea for that second track a bit further."

PL: "There is a great deal of this sort of stuff in the dance world at the moment, and I hear a lot of it, so I can appreciate what they're aiming for, but they still need a structure to make it work, and it feels to me like that's missing from these pieces, especially the first track.

"In terms of the production, the drums in the first track aren't punchy enough for this type of music. The sibilance on the second track totally ruins it. Fortunately this is only a demo, so they can move on, but for me, it's not working on either a compositional or emotional level at the moment.

"From the perspective of a producer, you could probably redo it and make it good, but there wouldn't be much point, because there isn't a great song underneath it all. I think they need to collaborate with someone who can make it all make sense; perhaps a good mix engineer who can turn their ideas into a powerful soundscape."

S: "Ndot don't seem to have any songs, but I presume they are aiming for club play, so the songs don't have to bash you over the head in the traditional way. Having said that, if club play is what they are aiming for, then these tracks are still lacking the power they need, and that is especially true of the first one. It sounded to me as though they maybe managed to get the drums and bass to fit together first of all, but then all their overdubs got progressively louder as they added them, and the rhythm tracks got completely swamped.

"The second track starts off a lot better. I like the voice and there are some good noises and effects, but again, it doesn't develop into anything. Ultimately, it just sounds like a collection of noises.

"I see from their sleeve notes that they have listed their influences, but I'm not sure it's such a good idea to include a list of impressive-looking influences, and then come up with something which is relatively sub-standard."

John Gummery is the course leader for the BA in Music Technology at Thames Valley University in Ealing, West London. His teaching and research interests cover digital broadcasting and surround sound recording and mixing. As a bassist, he played with several bands in the 1980s before serving as a recording engineer at numerous London studios. He also set up and ran his own studio in Clapham called The Music Womb for three years. John also works on his own compositions and productions.

Phil Legg comes from a production background with credits including many UK soul artists such as Terence Trent D'arby, The Pasadenas, Desree and Beverley Knight. His remix credits include De La Soul, Lisa Stansfield and Eternal. Phil has recently set up a new urban soul record label and publishing company called Futureproof. News of their latest releases can be found at www.futureproofrecords.com.

Matt Ward worked for the MCPS as a music licensing consultant before moving to kickin Music in London, where he heads their music publishing arm, Haripa Music Publishing, and works with their five labels. kickin/Haripa's catalogue and writers include Chiller Twist, Solid Groove, Kings Of Tomorrow, Deep Dish, Decoder, Blaze, Future Disciple and Black Grass.

Slim started his musical career as guitarist in the punk band The Fringe and served as lead singer/guitarist in The Pleasure Thieves. Today, Slim is one half of electronic duo Chiller Twist, who are proponents of the DIY music ethic, selling their own music through their self-made web site at www.chillertwist.com. They have remixed for dance labels Positiva, Perfecto and Combined Forces, and have licensed their own work for compilations over the world.