Q. With EQ, is it better to cut than to boost? 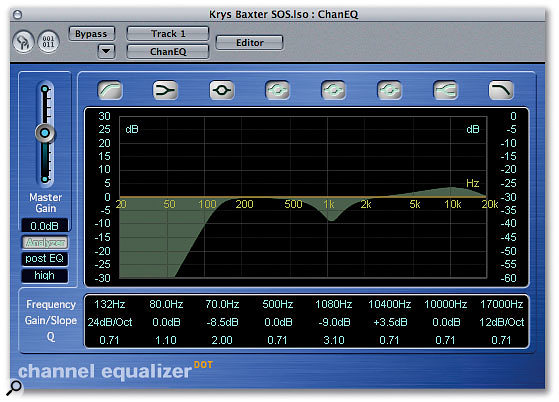 There are several good reasons why cutting is often a better idea than boosting, particularly when applying large amounts of EQ, such as is necessary when trying to correct the sound of something.

I've been told that, if possible, you should always cut rather than boost when EQ'ing. So, for example, if you need more bass, you should cut the high- and mid-frequencies and raise the overall level, rather than simply boosting the low end. Is this true, and, if so, why?

Technical Editor Hugh Robjohns replies: Firstly, let me say that the governing factor when applying EQ should be how it sounds, so if it sounds right — regardless of whether you have used boosts or cuts, or both — it is right! Secondly, if you weren't meant to boost signals the designers of console and stand-alone equalisers wouldn't have provided their EQ controls with a boost side! So rest assured that boosting is allowed, and you won't be dragged off to the Sound Processing jail to be shot at dawn if you get caught using boosts.

Having said all that, I generally only use EQ boosts when I need to apply a relatively small amount of gentle, wide-bandwidth tonal shaping. So if the bass end needs a little lifting, then I would probably boost the bass a little using a wide-bandwidth shelf equaliser. On the other hand, if I needed to do something more dramatic in the way of tonal shaping or corrective EQ'ing, I'd almost certainly try to do it with cuts. The usual technique is to wind in a fair bit of boost and then dial through the frequency range of a parametric equaliser to help find the problem frequencies. Once located, reverse the gain control to cut the offending frequency area.

There are several good reasons why cutting is often a better idea than boosting, particularly when applying large amounts of EQ, such as is necessary when trying to correct the sound of something. The first is the issue of headroom in the EQ circuitry. Boosting quickly eats into the system headroom, and you risk transient distortion when fast peaks run out of headroom.

Next, if you need to use high-Q (narrow-bandwidth) filters, the ear seems to be very sensitive to their effect when boosting, but surprisingly oblivious when cutting. The result is that the effect of the EQ is often far more subtle and less audible if cuts are used rather than boosts.

In the case of live sound, using EQ boosts tends to increase the risk of acoustic feedback. It's true that if you cut and then bring the level back up you are equally at risk, but in practice people tend to subconsciously know that raising the channel gain risks causing feedback and they take care. On the other hand, most people don't seem to associate turning an EQ gain knob up as adding gain — only as changing the tonality — with the result that as they try to make the vocalist sound a little sharper, the PA squeals embarrassingly!