Referring to Martin Walker's article on installing a new PC motherboard in SOS December 2003, the IDE chipset issue you mention is called an 0x0000007B error in a Windows NT-based OS. This is caused by the OS not being able to communicate with the hardware directly (as opposed to through the BIOS), just as Windows 98SE and earlier Windows versions do during the boot process.

There is a way to change the motherboard without having to 'over the top' install Windows XP or 2000. If you go to one of the following links in the Microsoft Knowledge Base you will find the Registry entries and instructions on how to prepare a PC running an NT-based OS for a motherboard change-out:

I am responsible for many PCs at work and have used these procedures since we started installing Windows 2000. Obviously, this has saved me many hours when upgrading equipment.

PC Specialist Martin Walker replies: Many thanks for the information, Dan. Not being able to reboot Windows 2000/XP after a motherboard change due to a different IDE controller being found is frustrating, but entitling the appropriate Microsoft support page 'You Receive a Stop 0x0000007B Error After You Move the Windows XP System Disk To Another Computer' doesn't make it particularly easy to find!

I did in fact mention the method Microsoft describe on these two pages (of copying the required drivers ahead of time to support the new IDE controllers, and of importing or merging the required Registry entries) in my article, but with no details available it sounded risky. However, since Microsoft do provide the appropriate Registry information on these two pages, allowing you to cut and paste and then import it before changing over to the new motherboard, and because they give detailed instructions on how to perform the procedure, I'm partly reassured, as I am by your feedback that you've performed the procedure on many occasions.

However, it's only fair to point out that Microsoft warn that they don't support this method (which normally means they won't be interested in tech support calls if it goes wrong), so unfortunately it still can't be described as 'official'. By the way, both of my 'over the top' installs work well following the changeover, but it's good to know that there's an alternative method available that takes far less time to perform. 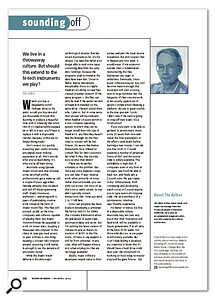 I regret to say that my Sounding Off column in SOS December 2003 contained an error. In making a point about file-format obsolescence, I stated that Native Instruments Reaktor v3 files could not be read in v4 of the program unless v3 was also installed on the Reaktor host computer. Since writing this, I've learned that Native Instruments Reaktor v4 can read Reaktor v3 files — as long as the WIBU Systems hardware dongle used by version 3 is attached to the computer [this was how Martin Walker correctly described the file format compatibility issue in his October 2003 review — Ed]. Once files have been imported into version 4 and resaved in that revision's newer file format, the dongle is no longer required by version 4 users, but any older version 3 patches not converted in this way will continue to require the dongle in order to work.

It would seem that the reason for this is cost — the WIBU dongle encrypts Reaktor v3 files, and although v4 no longer uses it, NI would have had to license the unencryption routine from WIBU in order to make it available to Reaktor v4 users. Interestingly, this means that despite my mistake, the point I was making still stands, because if you lose your v3 dongle or it stops working, v3 files will still be completely unuseable unless you converted all of your old patches to v4 format when you still had a working dongle. Nevertheless, my apologies to Native Instruments for the error.

All Back To Mono

I have recently tried the method for producing a perceived stereo image from a mono source given by Hugh Robjohns in the Q&A section of SOS December 2003. I found that it worked rather well, but I was wondering why you need to introduce the delay on the fake 'S' component of the M&S stereo matrix? I know the size of this delay is what determines the perceived room size, but why?

Technical Editor Hugh Robjohns replies: If you are familiar with the concept of Middle and Sides (M&S) microphone techniques (ie. a cardioid microphone to supply the 'M' signal pointed at the sound source, and a figure-of-eight mic at right angles to it providing the 'S' signal), then imagine a mono source in a simple room. The direct sound reaches the 'M' microphone, while a reflection off the side wall reaches the 'S' mic some time later. At a very simplistic level, the only difference between the 'M' and 'S' signals is the time delay of the 'S' signal, as the direct sound has had to travel out to a wall and back again. This is emulated by delaying the fake 'S' component created from the mono source.

At a more technical level however, what is happening here is comb filtering. If you combine a signal with a delayed version of itself (and the delay is a few milliseconds) then a comb filter is produced. Because of the fixed delay, at some frequencies the original and delayed signals are in phase and add constructively, while at others they are out of phase and cancel. In between there will be varying degrees of summing or cancellation, producing the classic comb-filtered frequency response.

By treating the delayed signal as a fake 'S' element of an M&S pair, we are adding the delay to the left channel and subtracting it from the right channel (or adding it out of phase, which amounts to the same thing). This produces peaks of certain frequencies in the left with corresponding dips in the right, and vice versa. Our perception of stereo positioning is governed by the relative levels of signal in the left and right channels, and this technique produces graduated level differences between left and right across the entire spectrum, thus producing a stereo effect. The spacing of the peaks/notches in the comb filter is too narrow for the ear to discern individual frequencies, but gives the impression of space.