Andy Searle-Barnes' Sounding Off piece in SOS March 2004 seems to have touched a nerve. In it, he argued that the 'DIY' recording boom is harming the industry, and that, for a serious project, a professional studio will always be able to do a better job. Here are just two of the letters we received. 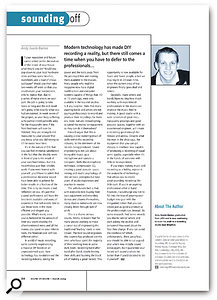 Aah! Don't you just adore the voice of youth? Especially when the owner of that voice is possessed of a degree — a device which, experience has shown me, allows the owner to be wrong with absolute confidence!

My own youth was spent in a time and place in which everything seemed to fight to suppress the desire to make music. There were no local studios and if you wanted to consider further or higher education in music you had the choice of classical or... forget it!

For a number of years (I exaggerate not) I saved to gather enough money to pay to have some of my music recorded. On the eve of my first-ever recording session, I was offered a second-hand Tascam Portastudio for slightly less than I was about to pay to have a 'professional' job done. Thinking that 'pro is best' I declined the offer and paid for my studio time.

My experiences of professional recording then and since have amounted to a lengthy and expensive catalogue of errors, including tapes wiped by accident, insufficient monitoring setups, mixes ruined by engineers deciding to 'try a few things' and duplicated tapes which ran nearly three semitones sharp.

Though these guys probably had 'the best tools available and years of experience', not once have I enjoyed a satisfactory service in a studio so now, in my retirement, I am setting about learning to 'do it myself'.

I am insulted by Andy Searle-Barnes' suggestion that because a job is not done by professionals then it is 'shoddy work'. I, like a great many other 'DIY' musicians, take great pride in everything I do and would never be satisfied with a 'shoddy' job.

I think the main (though hidden) thrust of Andy's article is given away by his use of the phrase 'black art' to describe recording. This calls to mind what I call 'Witch Doctor syndrome'. I coined this phrase for the guys in the IT department where I used to work. They, like the witch doctor, knew that their power — their only power — came from the ignorance of those they serve/rule. Those IT guys were openly hostile to anyone with the temerity to question their 'black art' and were always keen to ridicule those seeking knowledge.

I think the difference between a job that I do for myself and a job done by 'professionals' is that I am keen to complete the task to my own high standards, while my experience of professionals is that their only interest appears to be separating me from my money.

Andy Searle-Barnes is critical of the current trend towards 'DIY' studios and home recording for two reasons: the disappearance of studio apprenticeships and secondly, inferior equipment and inexperience.

These arguments do have their merits, but they aren't new. Similar arguments have been made in the face of changing technologies in many other creative disciplines. For example, the golden age of graphic design began in the '60s, and by the '70s typography had come of age. Professional typographers were specialists with years of experience behind them.

But then came the personal computer. It was affordable and with software like Photoshop, the individual graphics designer didn't need a typographer. The lone graduate could produce flyers in his bedroom using professional-quality photographic effects without having to go to a typesetting bureau.

Undoubtedly there are downsides too. In those early days, every Photoshop picture featured the 'Lens Flare' filter. It was graphic design's equivalent to over-processing with EQ or reverb in music production. With time however, we grew up and adapted, just like we will grow up and adapt to all this marvellous, liberating 'DIY' technology.

Many 'DIY' creators master in a pro studio (which is exactly what I do) with the aid of an experienced engineer. Pro studios have adapted to this function everywhere, and it is often more rewarding for the artist. My experiences in a band and in professional studios have shown me how difficult it is to accurately convey a concept to others. Most of the time you end up with a compromise, the incommunicable going by the wayside.

Andy's fear of the watering-down of skills is well-founded, but the watering-down of skills has been in evidence since the invention of the drum machine, to a greater extent since the arrival of MIDI, and to an even greater extent since digital recording arrived. The loss however, is balanced by the invention of new techniques and musical forms, which in turn create new experts.