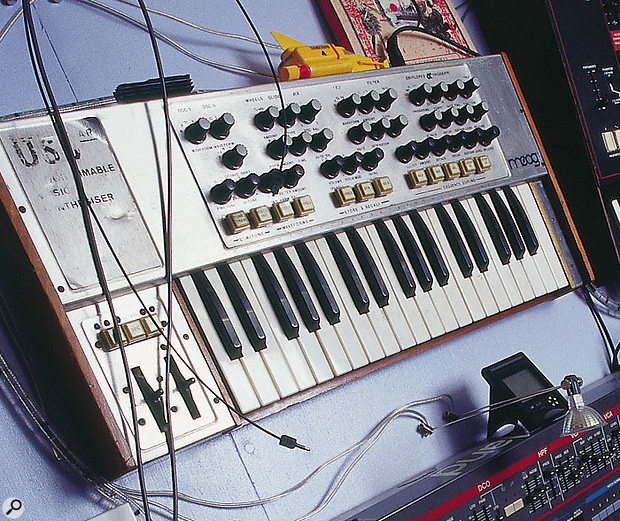 A MOSCar Or An Ooog?

It's always a wonderful pleasure to find the SOS April Fools jokes — very clever stuff. But what was that on page 41 of the Roger Lyons interview — a picture of a Moog Source with knobs on? Can we have the full story?

SOS contributor Tom Flint replies: Roger Lyons admits that the synth is a bit of a mystery, and, since its appearance in the April edition of SOS , he has received a number of queries from interested parties. Not only does the synth have 'OSCar Programmable Music Synthesiser', printed to the left of the top panel, but it also bears the unmistakable Moog logo on its right-hand edge, so it's not surprising that it's caused some confusion.

The synth came into Roger's possession a long time ago, shortly after a much-loved standard OSCar disappeared from his studio. Being an avid user of the instrument, Roger wanted to replace it, and contacted his local supplier of OSC synths to find out if they could help. Eventually Roger received a call from the shop, at about the time OSCar manufacturers the Oxford Synthesizer Company went bust, telling him that they had bought up the remaining OSCar stock and could therefore sell him a replacement.

When Roger visited the shop he noticed the OSCar/Moog-branded synth amongst the normal OSCars, and asked about its origins. According to the shop's staff, it had arrived together with the other OSCar units, and was thought to be some kind of prototype.

Having tried it in the shop, and established that it seemed to be more or less the same as an OSCar, Roger bought the synth and has had it ever since. Roger describes the synth as being identical to an OSCar in terms of its sounds and features, but with a Moog Source box and hand-wired innards. In fact, the case is the only Moog component. Roger explains: "If you look at a proper OSCar and compare it to this synth you will see that it is all laid out and labelled exactly the same. A Moog Source has just one knob, and the rest of the controls are membrane switches, and they are all in completely different places to an OSCar. So it's a Moog Source case and keyboard, but with totally different controls and front panel." To complicate matters slightly, Roger also reckons that the synth's pitch-bend and modulation controls are the same as those on a Roland SH101.

Roger has come to the conclusion that the synth must have been a prototype, put together in the OSC factory using spare hardware taken from other synths, and eventually sold together with the rest of the stock. However, even that scenario has been called into question by a synth fanatic who contacted Roger, saying that there was only ever one prototype made of the OSCar, and that was built into a Wasp case! Roger himself is sceptical about that particular story, as it would be difficult to fit all the guts of an OSCar into a much smaller Wasp case. Possible evidence that the synth was an on-going prototype is the addition of MIDI, which was not available on the original OSCar when it was released in 1983. Curiously, Roger describes the MIDI parts as being "hastily fitted", and the machine was running what Roger believes to be the latest versions of available software when he bought it, suggesting that it was a work-in-progress synth, rather than a discarded experiment.

Quite where the truth lies remains uncertain. Nevertheless the synth has now been bought from Roger by a collector in LA who took a fancy to the strange hybrid.

I was stunned and staggered to read Dave Shapton's comparison of the digital version of Radio 1 with the FM transmission and see him conclude that 'the FM station won hands down' [Cutting Edge, SOS April 2004]. 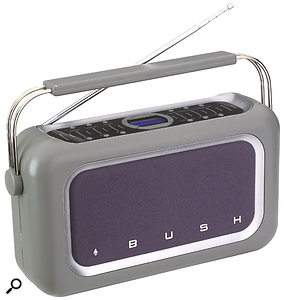 Now I'm seriously worried for Dave's ears, as, for the past five years or so, the FM version has been ravaged by Optimod multi-band compression. This is why DJs on Radio 1 sound like they are terminally asthmatic with sibilant, splattery speech.

Having determined that the BBC supplied DAB with an un-Optimod-ed signal, I splashed out on a Videologic receiver to connect to my stereo system (note for Dave: some of us do listen to DAB through a high-quality speaker system!).

It was wonderful! At 192kb-per-second, and with no unnecessary processing, I was able to hear records as they would have sounded in my own CD player. Then one fateful day, the asthma and splattering was back. The Optimods had invaded DAB. I was in tears. Investigation showed that bit rates, with the exception of Radio 3, were down to 128kb-per-second as the Beeb prepared for a plethora of new narrow-casting stations.

But why Optimod DAB anyway? After all, the DAB system allows the use of DRC (Dynamic Range Compression) so the listener can choose whether to compress his audio or not. But only Radio 3 and Classic FM have enabled this feature; for the rest of the stations, it's take it or leave it.

When I contacted the BBC, I was told that "the near-high-fidelity output you seek from terrestrial sources has been consigned to broadcasting history", and, as if that wasn't enough, "the signal is considered adequate for broadcasting", an expression I thought was reserved to describe AM radio.

SOS contributor Dave Shapton replies: Thanks for your comments. It's good to get the debate about quality going and I think we probably agree on most points, including the state of my ears, by the way! That said, I definitely thought the FM versions of the radio stations I listened to sounded brighter than they did on DAB at 128kb-per-second. This doesn't necessarily mean they sounded 'better', although that was my first reaction.

I spoke to technical people at the manufacturers of both the Bush and Videologic brand radios mentioned in the article and they both expressed their frustration at the way the low bit rates used by the BBC and commercial stations made their radios sound nowhere near as good as they potentially could.

I think the issue of Optimod compression is a separate one, because the way Optimod mangles audio is quite different to the MPEG data-compression process. And, yes, it is completely inappropriate to apply dynamic range compression to DAB signals, since you can apply DRC on the fly at the receiving end according to metadata transmitted on a data sub-channel. This, surely, is the best way to do things: leave the settings up to the user.

Unfortunately, I suspect that the Beeb is constrained by bandwidth restrictions. Without an additional national multiplex, they've simply got too many stations to cram into an already small space.