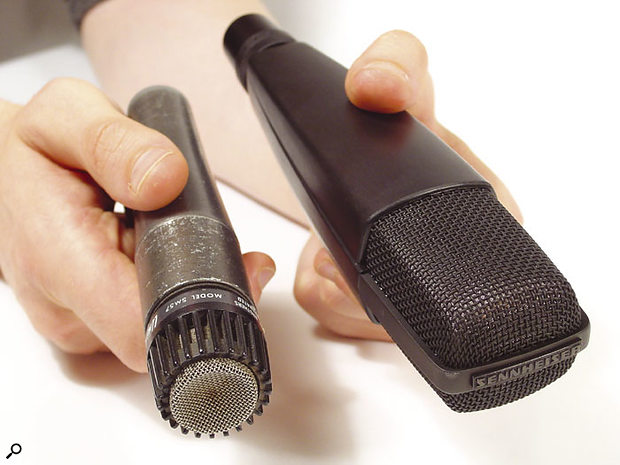 I was excited when I saw the title of your 'What Mic Should I Buy First?' feature in the July issue. I was just a little disappointed that it didn't include a chart showing how different mics at different price points are suited to different applications. My first (and only) mic is a Shure SM57 (which was mentioned in the article) which I think does a good job for a lot of things, but as I now have both the money to afford better, and have the facilities to take advantage of a higher-end mic, some kind of chart or table would have been a useful reference for choosing which mic to buy.

Reviews Editor Mike Senior replies: I'm afraid I'm not sure that such a chart would be of any real use, and it would also almost certainly be gravely misleading. Mic choice is so much a matter of personal taste, and varies so much from session to session that it's simply not possible to make much in the way of a generalisation. If you look at some of the interviews with producers and engineers in our past issues, you'll soon see that not even the most well-known names in the industry agree on how to mike up a snare, a guitar cab, and so on (despite their usual protestations that they just 'do it the standard way') — and not only with regards to mic choice, but also in terms of positioning and processing.

If you still can't decide after all that, then you've got two choices. Firstly, you can look at all the reviews of Far East-produced large-diaphragm condenser mics under £250 we've featured in the last 18 months (the Samson C01 in January 2003, the Studio Projects C1 in December 2002 and the Red5 RV8 and RV10 in June 2002 spring to mind), and buy one of them. We've found them all to be quite similar-sounding, although any deviations from this trend will be stated in the reviews. Many other manufacturers are producing condenser mics priced around or below the 250-pound mark, such as ADK, AKG, Audio-Technica, Beyer, Cad, MXL and Superlux. Given the price/quality ratio, you'll probably be getting a good deal whichever you go for, and they'll all let you learn a great deal about recording without breaking the bank. With a little care you should be able to get release-quality recordings out of them too.

The second option is to buy yourself a Neumann U87! This is possibly the most common professional all-rounder when it comes to large-diaphragm condenser mics, and it appears in almost every professional studio around the world. It has been used on so many hit records that, if you're not getting a good sound, then you're almost certainly the one at fault! It's expensive, like all premium-quality products, but, with care, you'll get a lifetime of pristine professional audio from it.

I just wanted to make a couple of comments on Hugh Robjohns' answer to the question, 'What advantages are there to variable input impedance?' [Q&A, SOS June 2003]. The figure of 1.2kΩ as a preferred input impedance, described by Hugh as the 'normal' input impedance, became lore in the '60s and '70s, as this was the best compromise to get the optimum signal-to-noise ratio. Five times the source impedance of 200Ω seemed like a good figure. But then Hugh gets his physics back to front. He states that a higher impedance input gives less HF loss from the cable — I'm afraid that's not true. On long cable runs in particular, high input impedance means that the capacitative effects (HF loss) of the cable are made worse. All my most recent designs try to fool the cable into thinking it's a short-circuit that it's seeing — that way, this effect is eliminated. But for most purposes the effects are minimal. They become more significant with increasing cable length.

Hugh also says that dynamic mics produce a 'more uneven frequency response' when driving into a lower input impedance. While this is true for a few microphones, I would suggest that the majority are noticeably happier working into lower impedances. After all, dynamic mics are current producers — they generate a voltage by virtue of the impedance of the preamp (and most preamps work by amplifying that voltage). The ribbon microphone is the supreme example of a 'current-producing' mic that needs these lower impedances, as is acknowledged by Hugh.

Lastly, I heartily endorse Paul White's comments [Leader, SOS June 2003] on studio equipment; a studio is a set of tools and there should be no conflict between hardware and software studios — they are both valid.

Technical Editor Hugh Robjohns replies: I am indebted to Ted for pointing out that I had my 'physics head' on backwards the day I wrote that Q&A reply! It is indeed the case that a high-impedance load at the end of a long mic cable will increase the capacitive cable losses, and thus reduce the amplitude of higher frequencies more than the same cable loaded with a very low impedance. However, I have noticed that, in practice, with most modern capacitor mics (using active electronic output circuitry), a relatively high input impedance appears to counteract the physics to some degree — presumably because of the reduced loading on the output buffers. Certainly, on the few preamps I have tried with adjustable input impedance, I have frequently perceived an increase in the 'air' and HF ambience of the signal captured by various capacitor mics when selecting the high-impedance input mode.

I happily accept that current-producing dynamic mics are generally happier working into low impedance, but the precise effect that input impedance has on the tonal characteristics of these kinds of mics does seem hard to predict — some becoming noticeably more coloured and others less so. Being realistic, though, the adjustable input impedance facility on suitably equipped preamps is going to be treated by users as a kind of tone control, rather than as a means of ensuring technically optimised impedance matching, so whatever sounds right is best!