I just read your excellent [Classic Tracks] article on Bob Clearmountain's recollection of how 'Run To You' was recorded and how it ended up on the album. I just wanted to give you a minor update on how that song got recorded — as I remember it! 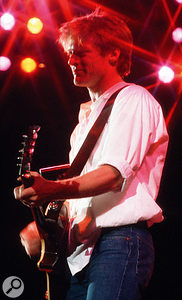 We had reached the critical stage on the album where we needed another song, and Bob had asked me what others I had, so I pulled this song out while we were all together in the studio and we decided to give it a try. I taught it to the band and we went out and did a sort of trial take of the song. I can distinctly remember looking back into the control room and seeing Bob standing up smiling, so I went in to listen and it was really exciting. We decided to try one or two takes after that, but they weren't as good. Apart from re-doing my vocal (because I was shouting the changes to the band), and adding the odd guitar and percussion overdub, It's the first take of this song that you hear today. It was also the last song recorded for the album.

Hats off to Bob for producing me, and creating the amazing sound in that shit hole of a studio! I still to this day don't know how he did it, but that's Clearmountain for you.

On a musical note, 'Run To You' was co-written with Jim Vallance, and credit also has to go to Jim for the fabulous bass line in this song!

I enjoyed reading the latest issue of SOS, which arrived this morning. A reader was enquiring about the suitability of a Dell Inspiron 9400 as a music laptop and Martin Walker pointed out that it only came with a 5400rpm hard drive. I actually went down this route myself a couple of months ago and bought an Inspiron 9400, choosing a 7200rpm drive from the upgrade options that appear on Dell's web site. I'm pretty happy with the machine — not only does it have a great screen but it has a built-in subwoofer so the sound is of reasonable quality for a laptop. On the other hand, it took me several hours to remove all the useless bundled software that came with it. I then partitioned the drive the way I wanted it and it's working great.

The only problem I've had is with a Focusrite Saffire audio interface, which with a Macbook was absolutely silent, but with the 9400 has a hefty hum. This was almost certainly due to the Macbook having a six-pin Firewire socket which didn't need a wall wart to be used on the Saffire, whereas the Dell, in common with most PC laptops, only had a four-pin socket, and it was plugged into a four-way trailing socket that probably had lots of interference. I imagine that with a suitable six-pin Firewire PC card the problem will disappear. So, to summarise, if you can configure the Dell the way you want it and remove all the rubbish, it's a fine machine.

PC music specialist Martin Walker replies: Thanks for the feedback, Jack! All the reviews of Dell's Inspiron 9400 I read had an 80GB 5400rpm hard drive fitted, so I presumed this was standard. However, visiting Dell's web site confirmed that there are indeed various options available, including a 7200rpm hard drive of up to 100GB, optional 17-inch UXGA Wide Screen Ultrasharp display instead of the standard WXGA+ one, and a DVD+RW drive instead of the standard DVD-ROM one. Bear in mind, though, that fitting a 7200rpm drive is likely to reduce your battery life compared with that quoted in most reviews. 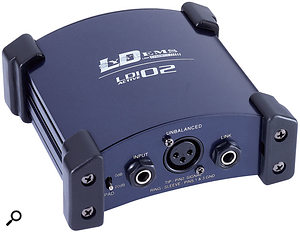 Laptop PSUs sometimes cause ground-loop hum. Using a DI box in the signal chain can cure it.It seems that the days of a particular model number implying a certain specification are long gone, which also makes it even more important when seeking feedback on Internet forums. If, for instance, someone states that a Dell Inspiron 9400 works well for them with Cubase SX, you'd have to check what specification their particular model had before you got the whole picture. In fact, this business of customising laptops at the point of purchase can have other implications. For instance, I've known musicians to buy laptops from some dealers with a RAM upgrade that they had to fit themselves. This suggests that the RAM upgrade isn't supplied by the laptop manufacturer, which could have repercussions if you ever had to return the laptop to its manufacturer for repairs under guarantee. So, if you're buying a customised version of a laptop, always check that any modifications to the basic spec are still covered under your manufacturer's guarantee before handing over your credit card number.

Sadly, your experience of having to uninstall lots of trial software, special offers and so on (aka bloatware and rubbishware) isn't an uncommon one. Many laptop manufacturers are now pre-installing lots of largely unwanted items in an effort to provide better value for money, but they can prove absolutely infuriating, especially when they nag you to register, are pre-loaded into your system RAM without your agreement and have to be manually quitted.

Furthermore, some laptop models no longer ship with a Windows XP CD-ROM and driver CD-ROM. Instead they arrive with an image of the bloated install on a separate partition of your hard drive, making it more difficult to revert to a plain vanilla version of Windows. However, when you take the trouble to do this you may find your new laptop is noticeably nippier than it first appeared. One SOS Forum user I recently came across was convinced his laptop was faulty when he first tried it with Cubase, but was rather more enthusiastic about its performance after a software slimming regime!

To address your final point, about audio interface wall-warts resulting in hum, this may not be the case. Many wall-warts are double-insulated, requiring no mains earth connection, so plugging one in wouldn't result in ground-loop hum. The more likely culprit in this case is the earthing on the laptop PSU — Dell laptops are becoming notorious for causing such audio problems (I specifically mention other Inspiron models in my FAQ on this subject on the SOS Forums), although you can nearly always cure them with a DI box placed between the audio interface and whatever you plug it into.