How bad will the cost of living crisis get? Energy prices are forecast to rise by hundreds of percent this autumn. Inflation has officially hit double digits, and real‑world prices are outpacing it. Add strikes into the mix, and the UK could be looking at a second winter of discontent. 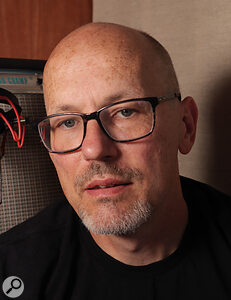 Sam Inglis, SOS Editor In Chief.In the first one, at least we had ‘Hit Me With Your Rhythm Stick’, ‘Heart Of Glass’ and ‘One Nation Under A Groove’ to keep us going. Whether this winter will produce as many enduring hits as that of 1978‑9 is hard to know. But how else might the crisis affect music and musicians?

The top end of the market will, I predict, be the least affected. Those who have the most to spend on luxuries are usually the best insulated from financial crises. There will still be buyers for this month’s cover star, the Oberheim OB‑X8, just as on the consumer side, there will be demand for thousand‑pounddollar headphones and premium network streaming hi‑fi kit.

For those of us at the sharp end, though, the consequences could be felt in all sorts of ways. Netflix has already shed millions of paid subscribers: could Spotify and Apple Music be next? Parents faced with a choice between music lessons and heating the family home are only going to jump one way. Even the biggest live music fans will have to cut back on gig‑going if they can’t afford to eat. And self‑funding artists might decide to put off costs like studio hire, upgrading their PA systems and even replacing old strings or drum heads.

The solutions won’t be the same this time around, but it’ll be the same people who flourish.

Coming off the back of Covid, then, the cost of living crisis is just what the music industry doesn’t need. Is there anything we can do to help us weather it?

The people who got through Covid best were the ones who adapted. When gigs dried up and travel became impossible, they found other ways to share their music. Studios that couldn’t have paying clients through the doors paid the bills from other revenue streams. Mix engineers diversified into mastering. The solutions won’t be the same this time around, but it’ll be the same people who flourish. Studio owners who are still wedded to a 40‑year‑old ‘build it and they will come’ mentality will fall by the wayside; those who cope will be the ones who are able to change.

It won’t be easy, but it will be possible — and whether you’re trying to identify fresh opportunities, wondering what kit you need to move into a new field, or seeking to learn new skills, Sound On Sound will be with you all the way. The biggest hit from the first winter of discontent? ‘I Will Survive’...