Because of the distorted time field in which magazine production works, I'm writing this leader column immediately after the 2005 Christmas break, and once again the choice of TV programmes was so dismal that I decided to give the whole thing a miss and instead do a Studio SOS on my own studio. If you recall, last time I did this a huge amount of outboard gear and several kilometres of cable were pruned away, so you may wonder if there was anything left to cull! There was, and now the cupboard of eternal darkness has got so much gear in it that it could probably set up as a studio on its own! 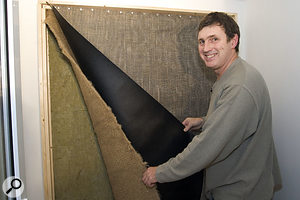 As I hadn't used my cassette deck or either of my DAT machines within the past year these were the first to go — I can always fish them out if a client turns up with material recorded on some historic format, which is why my quarter-inch analogue two-track machine made the trip a couple of years previously. That allowed me to lose another patchbay, which in turn allowed me to lose a complete rack, thus gaining more valuable space. I also dismantled my surround system, as surround rapidly seems to be going the same way as quadraphonic (other than in movie production), but I've kept the speakers and stands nearby in case I need to set it up again in a hurry. The other thing I did was modify the mountings for my two computer monitors to lower them, as the upper shelf of my otherwise lovely Quik-Lok workstation placed them so high up that I had permanent neck ache from looking at them. It is surprising just how much more pleasurable recording can be when you've sorted out the ergonomics!

Since Korg brought out the Legacy Collection, my two Wavestation SRs have been on extended leave, so now they've gone to join their friends in the cupboard, leaving my beloved Roland JV2080 as the only hardware synth in the village. This feeds directly into my audio interface, so the little mixer I was using to combine my keyboards has also gone. The result is far less knitting, far less complexity, more space and a generally better working environment. However, there's more to a studio than a table with gear on it — there's also the acoustics!

It doesn't matter how good your equipment is, you won't be able to do a good mix, let alone embark upon mastering, if you don't have adequate acoustic treatment and a decent pair of monitors. Last time I did a reshuffle I moved my studio system around by 90 degrees, and although I also moved some of the Primacoustic foam I'd fitted previously, I still felt more needed to be done. So, pausing only briefly to watch Chicken Run again (one of the true classics that was worth watching!), I built some large traps to go behind the monitors comprising acoustic foam on top, a Rockwool slab underneath and an air gap behind to give me better low-end absorption. My Mackie monitors have rear-facing passive radiators, and the wall behind them seems to need more attention than is the case for front-ported speakers.

A similar trap behind my listening position plus a couple of panels on the ceiling (and some self-administered Hob Nobs) completed the makeover and the improvement in both bass tightness and stereo imaging was quite noticeable, even though the room had been reasonably well behaved before. This proved to be quite timely because I needed to check out some mastering comparisons which you'll be able to read about in this issue. The difference between mastering jobs done by different engineers can be very subtle, so your monitoring has to be pretty accurate to make any sense of the results. If nothing else, this feature proves that mastering is not for the faint-hearted or the heavy-handed!