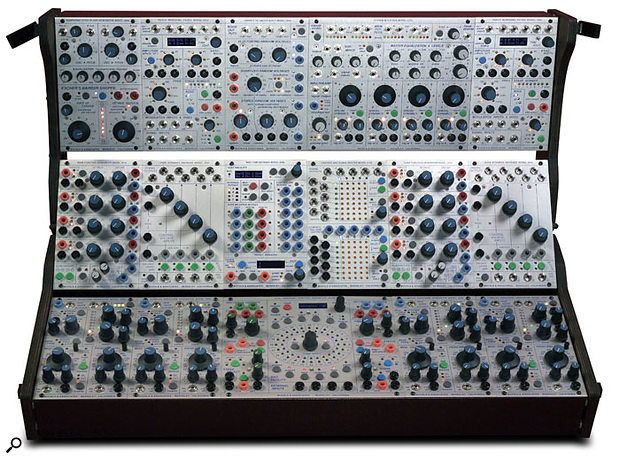 I write to you concerning Gordon Reid's review of our 200e Electric Music Box, presented in your December 2005 and January 2006 issues. Seldom do I comment on reviews, but I wish to submit some corrections and clarifications.

The first and foremost issue is the build quality. Your reviewer attacks me on four points, all of which I shall defend. We design instruments that far outlast others. All our components are subjected to in-depth scrutiny, particularly with regard to longevity (mean time to failure) before being considered for application. The "wobbly" pots in our system do not reflect imminent failure — the wobbliness stems from the support scheme used by the bearings. The failure rate is zero over millions of hours of testing.

Secondly, your reviewer attacks my choice of interconnects. These standards were established in 1963. I have seen zero banana jack failures and zero signal connector failures in this period, and continue to use the same parts built by the same reputable manufacturers.

The third reflection on build quality is the failure of a plastic latch, used to stabilise the system while hand carrying it or moving it in or out of its protective case. This was the extent of its intended application — it was not meant to keep the system locked in its closed position while transporting it in the rear seat of an automobile or on public transportation. A very sturdy carrying case is provided with the system, although I understand this was not used when transporting the SOS review system — use it, and your system will be properly protected during transport. Would you transport a violin without its case?

Lastly, your reviewer takes me to task for my choice of finishing materials. Aesthetics influence this decision, but let me point out that the nine-ply, void-free, marine-grade plywood used on the 200e and denigrated by Gordon is definitely not cheap — it's sourced from Finland and Russia. Perhaps you'll find solace in investigating the inner makings of tennis racquets, skis, pianos, and furniture, all of which have used laminated wood for vastly superior strength and stability.

Gordon also suggests that our 200e systems are not readily compatible with our older 200-series models. I wish to clarify this. Firstly, there's the issue of physical compatibility. All 200 modules (including the newer 'e' models) are built with panels that follow the 4.25 x 7-inch standard that we introduced in 1963. However, the Model 212 Dodeca module and the Model 275 Reverberator are too deep to fit into 200e cabinets.

Electrical compatibility is also important, and our last power supply revision was in 1970. The 200e provides highly regulated supplies at plus and minus 15 Volts (not the 12 Volts of the external power supply), a fact easily confirmed with a little probing of the innards. Only two older modules, again the 212 and 275, require an additional voltage (24 Volts).

Signal, control voltage and pulse levels are another aspect of compatibility. Once again, our last revision was in 1970 — all 200 modules, including 200e versions, have followed suit. My conclusion is that the 200e series modules maintain their intended compatibility with their predecessors, with the aforementioned rare exceptions.

Now to the issue of expense. I am aware that our system is not the cheapest on the street. But "a staggeringly huge price tag"? I'm reminded of the hi-fi gear introduced by Electrovoice in the late '60s. About one-eighth the size of conventional equipment, the stuff was solidly built, definitely up to snuff in performance and similar in price. But it failed to make an impact — the public seems to feel that superior stuff has to occupy superior volume. With the acceptance of car stereo, small of necessity, the public's taste has loosened up a bit, but high end hi-fi equipment still comes in big, mostly empty, cabinets.

Price tags on gear with performance characteristics similar to that of the 200e, but housed in multiple and definitely non-portable racks, is equally expensive, yet causes no 'sticker shock'. This is a principle I am well aware of, but choose to completely ignore when designing new products. I would have hoped that your esteemed reviewer would see beyond the 'bigger is better' principle. Actually, maybe he did, when toward the end of the second part of the review, he remarked, "is the 200e really that expensive? If you carefully consider what it might cost to purchase a modular synth with similar features from elsewhere... the Buchla can almost seem cheap". Maybe, in the course of his research, a radical change of mind occurred.

Gordon also suggested that the prices quoted for the 201e6 and 102e18 cabinets, $700 and $1400 respectively, were the prices for "the empty cabinets, not for the cabinets filled with modules as in the SOS review system". At those prices, the cabinets are not empty, but, in addition to the accompanying external 12 Volt supply Gordon noted, contain highly regulated, completely isolated power supplies, as well as low impedance power distribution rails and sockets. They also house internal data busses and card slots, and the elaborate, but invisible, interconnection wiring that establishes electrical connection between boats.

In the opening paragraph of the Overview, in the first part of the review, Gordon reminds us of a few things that the 200-series is not. As for what it is, the 200e is internally a hybrid synth, analogue in the signal paths, and digital in the control sections; an easy separation to implement and maintain as a result of signal versus control-voltage distinction. As far as I'm concerned, the system is generally analogue. The controls are almost all functionally dedicated and interconnections are analogue; the 200e simply behaves as an analogue synth.

Hopefully, I leave your kind and tolerant but inquisitive and deserving readers with a slightly better sense of what we're all about. Reliability is of the highest concern to us, and we intend to continue making instruments of unimpeachable quality. We do our best to build fine instruments at fair prices, but we promise to avoid the cheap. Fame, fortune and financial success are of secondary importance, and we'll happily flail about in "the backwaters of the music industry" for a long time to come.

May you enjoy the world's many instruments.

Managing Editor Matt Bell replies: Thanks for your comments and clarifications, particularly with respect to the precise nature of the compatibility between the older 200-series modules and the 200e system. In fairness, we didn't suggest that it was impossible to use 200-series modules in the newer casings, merely, as stated on the Buchla web site, that there were some compatibility issues. Clearly, however, these are minor and don't affect the majority of 200-series modules. 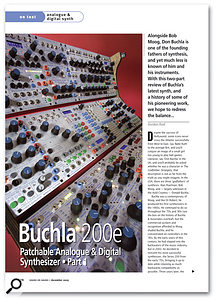 As regards the build quality, our concerns were founded on the feel of the controls based on many years of experience of audio and recording gear. To a man, the entire editorial staff of Sound On Sound had feelings similar to Gordon's about the pots and connectors when first confronted with the 200e during its time at our offices, and, having all had experience of 'homebrew' kit synths with plywood casings, we felt that the plywood created an impression unsuited to the cost of the system. In fairness, though, we can confirm that there were no component failures of the review system while the 200e was in our possession, with the exception of the plastic locking clip — but then, we had not been supplied with the carrying case Don Buchla mentions, and had to transport it without the case's protection, which may have further weakened the clip.

Our comments on the price of the system were twofold, and may seem contradictory, but we regard them as complementary. We can confidently say that $20,000 dollars is the kind of outlay that nearly all SOS readers would have to seriously consider before making. In that sense, the absolute cost of the system is indeed high. But it's only fair to also consider the relative cost, as Gordon did towards the end of the two-part review, by comparing the 200e, as far as possible, to a comparable system offering comparable features. As Gordon stated, such comparisons involving the 200e are not straightforward, as there aren't many other synths quite like it, but by doing this as far as possible, he concluded that the Buchla could indeed seem cheap by comparison.

The concern about the price of the 'empty' cabinets stems from a misunderstanding. We were concerned that some readers might have felt the 700 and 1400-dollar price tags related to the boats filled with modules, as in the review 200e system, whereas of course, these prices are for the cabinets before they are filled with modules. The use of 'empty' here was intended to signify an unloaded boat, not that this price bought you a completely empty wooden shell devoid of power supplies. I hope that this is now clear.

Finally, it's important to state that in publishing the extensive 200e review, we wanted not just to review that system, but also to reintroduce Buchla and his considerable achievements to the world. We felt, as we stated at the start of part one, that such redress was long overdue, particularly amongst our readership in the UK and Europe, where Don Buchla's name is much less well-known than in the United States. Far from being designed to slight Don and his work, the article was intended to be a celebration of his achievements, and an attempt to familiarise our readers with his unique approach to synth design.

As part of this process of reintroducing Buchla and his products, we wanted it to be very clear from reading the review that although the 200e might bear a resemblence to other patchable or modular synths, there was a very different design ethos at work here, and that readers approaching the system with expectations that it would behave like other modulars would have to rethink their attitudes. Hence the extensive comments about what the 200e was not, the extensive coverage given to the individual modules' capabilities, and the publication of the unconventional waveform traces in part two. The idea was that by reading to the end of part two, the average SOS reader might gain, as Gordon did while writing the review, a much closer understanding of Buchla's designs. We'd be interested to hear whether you feel we succeeded in our aims!