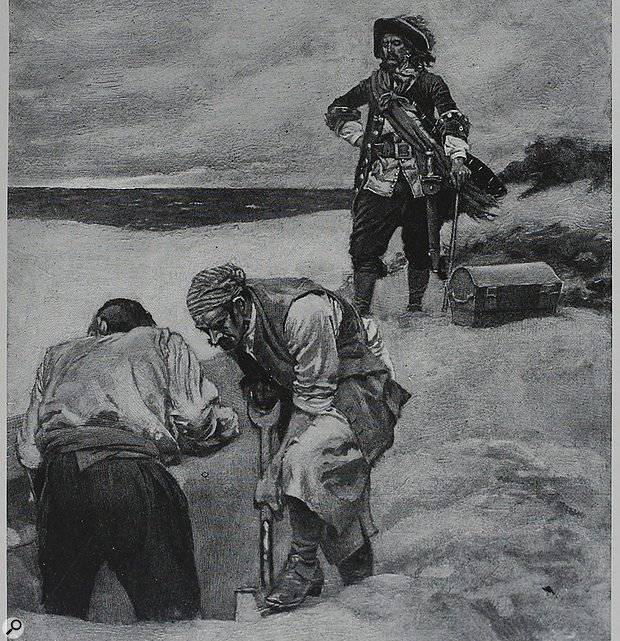 “Never mind the pieces of eight and the rum, you’ll find that USB eLicenser or hang at the yardarm.”

Does the concept of ownership mean anything in the software studio?

George Orwell’s classic novel Nineteen Eighty-Four depicts a near-future totalitarian state where the authorities constantly alter and delete from the archives any history or events they would prefer the masses not to know about. It’s a book rich in bleak irony, and despite having been written 70 years ago, is eerily prescient for our interconnected times. In 2009 this irony became a reality and the whole art-imitating-life-imitating-art paradigm collapsed in on itself when one of the world’s most powerful companies, Amazon, realised they had been selling copies of Nineteen Eighty-Four via a third party who had uploaded them to the Kindle store without owning the rights to do so. Realising the error Amazon then sent a digital message to all customers’ devices through its not-at-all-scarily-titled WhisperNet, which quietly instructed each Kindle to immediately delete any trace of the book.

I found myself in a similar situation recently when I woke up one morning to discover I was no longer the proud owner of EastWest’s Quantum Leap Storm Drum 3 sample library. Strange. It had been working perfectly since I bought it in 2015. All the files were sitting on my computer happily where I had left them, and its front-end software plug-in, Play, was confusing, badly laid out and counterintuitive — in other words, working perfectly normally. But my iLok had simply lost the authorisation licence that allowed any of the patches to load. I hadn’t deleted the licence. I hadn’t made any changes to the iLok at all and, thankfully, this tiny, unspeakably precious USB stick was allowing me to use all the other licences it had on there. But the Storm Drum 3 licence was simply gone.

An email to the iLok people (they don’t take calls, obviously) yielded a reply 18 hours later to the effect that, rather worryingly, they had no trace on their system of my ever having owned this particular licence, and that I should take it up with EastWest. To their immense credit EastWest immediately issued me a new licence, and 48 hours later I was back up and running. Without wanting to sound cynical I’m still not entirely sure whether EastWest’s no-quibble replacement was down to this being a disturbingly common occurrence, to them just being really nice people, or to the fact that I signed my email message Paul Farrer: SOUND ON SOUND COLUMNIST.

Moaning about copy protection is a cliché. Software and copyright piracy is a huge problem, and one that I will always fight against. The only way developers can keep giving us amazing products is if they can invest in their R&D safely. I get it. I don’t want to use pirate software, I don’t want to see the industry damaged — but at the same time, I feel entitled to rail against the idea that we should have to accept ‘ownership’ of these often very expensive professional products being a sort of Schrödinger’s cat of availability that you can’t rely on.

When all that stands between you being able to use the thing you’ve paid for and not is a tiny electronic serial number that has the capacity to simply disappear in a puff of quantum decision-making, it damages your confidence in your investment. Which, in turn, damages the wider industry.

As it happens, I got by without using Storm Drum 3 for two days because, years ago, I’d spent a weekend converting and resampling most of the presets into EXS24 instruments — which, I’m pretty sure, is both a breach of their terms of use and an exercise I’m not planning on repeating with the 310GB of their Hollywood Strings release. Rescuing people is not what pirates are supposed to do.