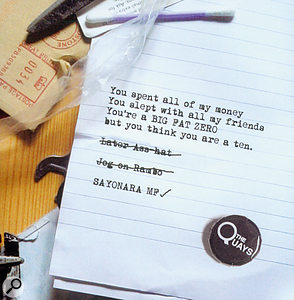 In a strange sort of way, the Quays remind me of fondly remembered Scottish punk–poppers the Rezillos. Singer Lauren Woolgar has something in common with the legendary Fay Fife, but it's not so much the musical similarities that strike the ear: it's the joyous, crowd–pleasing exuberance both bands radiate. You just can't imagine having a bad time while listening to the Quays.

Within the boundaries of guitar music, the Quays are also refreshingly different. Avoiding the cliches of skinny-tie indie and wailing blues-rock, they somehow combine Motown, the twisted power-pop of early XTC, bubblegum girl-group kitsch and the more listenable bits of progressive rock in a way that not only works, but doesn't sound quite like anyone else. I doubt it's sufficiently in tune with current tastes to storm the charts, but it's guaranteed to leave you with a smile on your face. Sam Inglis 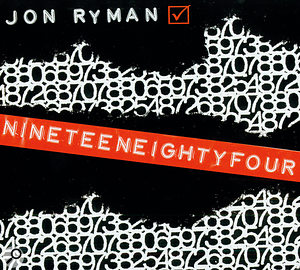 The Yamaha DX7 was swept to power in 1984, in a popular revolt against the dinosaurs of the analogue age. Soon, manufacturers whose only crime had been to make big and unwieldy synthesizers began to 'disappear'. Keyboard players were enslaved by tinkly digital piano sounds: those who rebelled faced the terrifying ordeal of re–education at the hands of Stock, Aitken and Waterman. The DX7's domination of everyday musical life became totalitarian, a jack plug stamping on a human face forever...

I digress, but not much. Jon Ryman's Nineteeneightyfour is a song cycle loosely based on George Orwell's dystopian novel, and he makes a big deal out of having recorded it entirely using pre-1984 instruments. I don't know if this makes him superior to producers who rely on vintage instruments just because it's fashionable, but it does give his music an up-to-the–minute, retro-futuristic quality, and Jon's sincerity is preferable to the heavy-handed irony that often accompanies this kind of ersatz '80s electronica. He's also gone the extra mile in the pursuit of authenticity, tracking down ancient Texas Instruments microcomputers in order to make use of original speech synthesis programs, and he handles his sources very well indeed. If there is a weak spot, it's Jon's rather tentative vocals, which don't quite have the requisite Big Brother authority. Sam Inglis 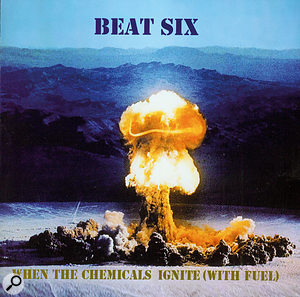 Beat Six When The Chemicals Ignite (With Fuel) EP

Exploring an entirely different set of '80s influences are Beat Six, a melodic indie band from Staines. Like their compatriots Hard-Fi, their music has a noticeable ska feel in places, which is skilfully blended with hints of Gang of Four and the Smiths. There's no flashy production on their EP, but it gives the impression of being an honest document of a very tight band, and if I were an A&R man, I'd be marking them as an act to catch live at the earliest opportunity. Sam Inglis 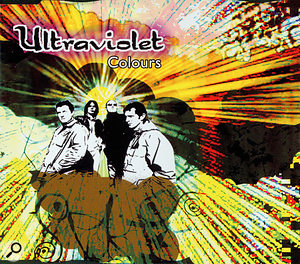 Think Coldplay, Keane and Scouting For Girls [Do I have to? Ed] and you're not a bus ride away from Ultraviolet. Everyone involved has obviously got some talent for songwriting, mixing and playing, and the vocal and guitar delivery from David Clogg is a solid foundation for a tight band.

However, there's more to the music business than music. Ultraviolet are the first signing to a record label set up by a bunch of students in 2007 at their college in Canterbury. They are fiercely proud of their achievement, but the package feels as though it has little to do with the music, the press pack is poor, and the main body of information is a straight print-out from the Guardian web site, complete with the browser menus printed on the header. Reading about these self-proclaimed student gurus, it dawned on me how ridiculous the whole thing was. Business students having a successful model? That is what's meant to happen to graduates, right?

So while Dave Clogg and his boys look promising, for once it is the artist who needs to drop the label. Pete J Thomas 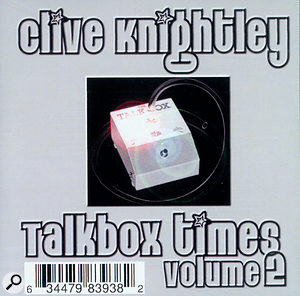 There's something incongruous about a smooth R&B producer being called Clive. It's like encountering a management accountant named DJ Fresh, or a Katie Melua tribute band called Rancid Attack Badger. Surely there must be scope for some sort of P-Diddy-style nickname?

The concept behind Clive Knightley's album is also quite odd. It's a collection of commercial soul ballads, which are nicely produced and perfectly normal in all respects but one. The twist, such as it is, is that the vocals are sung through a talk box. All of them. Particularly mind-boggling is the fact that this is Volume 2 — indicating, presumably, that demand for talk-box-led commercial R&B is a lot greater than any of us had thought.

On the plus side, I suppose it helps Clive's music stick out from the crowd, and removes the need for Auto-Tune. But, in all honesty, it's a gimmick that really can't support an entire album, especially when there's so little variety in the way it's used. The talk box might not be the most versatile effect in the world, but it is at least possible to achieve a range of sounds by experimenting with guitars and other sources. Clive sticks closely to a diet of nasal synth leads, and it's all too limited to sustain interest for 40 minutes. Sam Inglis 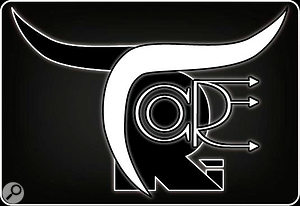 Heavy metal band Tricore (three times as hardcore, perhaps?) have sent their debut EP, Unbound, in for review. It took 13 days to record, and apparently, as they were laying down the final vocal take, at 13 minutes past one (or 13:13 on the 24-hour clock), there was an almighty crack of thunder and

This isn't true, of course (well, the bit about it taking 13 days to record is. The rest I just made up). The actual press release that came with the CD was rather more tame than that, and also fairly modest. "The results were pleasing" is not a phrase I read often enough in band-blurb, and if I were to describe a band as "sometimes unorthodox" I'd consider it a bit of a backhanded compliment, but there you go.

Actually, Unbound is a rather good EP, marrying, as it does, accessible (dare I say radio–friendly?) vocal melodies, grinding riffs and tight drumming that ties the groove together well. For the main part, it's pretty conventional contemporary metal, highly accomplished in terms of playing and production, with only the occasional Tenacious D moment. There are some nice surprises, in particular the Daft Punk-style vocoder part in the title track, which is a real masterstroke — it's just a shame there aren't more of these quirks, and I would advise Tricore to pay more attention to whoever it was that said "Hey, let's use the Microkorg on this one!"

Incidentally, at the time this CD was sent in, Tricore were looking for either a drummer or a vocalist. Not, I should add, because they weren't quite sure whether to take their music in an a cappella or a samba direction, but because both vocal and drumming duties on the EP were taken care of by Chris Kerley, and presumably he can't do both at the same time. That's not an affront to his musical abilities (coming from someone who can't play guitar and sing at the same time without going cross-eyed and dribbling, that would be a bit rich), but if anyone reading this is tempted, I recommend you check out their MySpace page. Chris Korff 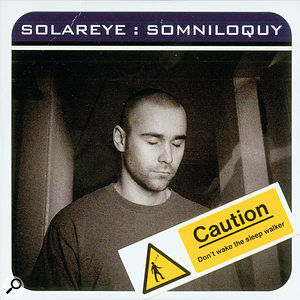 Dave Hook is, it says here, "a talented MC from Airdrie, on a mission to change people's perceptions and experience of Scottish hip-hop". I don't know about you, but my experience of Scottish hip-hop is roughly on a par with my knowledge of Estonian cardi-core or the underground klezmer scene in Yemen, so the mere existence of this CD has pretty much fulfilled Dave's mission.

Whether Somniloquy is representative of Scottish hip–hop in general I can't say, but it definitely has its own sound. The grooves are busy, with their roots in funk and jazz. Clean guitars and live bass playing underpin some catchy soul vocals, but it's Solareye's rapping that is rightly the centrepiece. His thick Scots accent grabs the ear immediately, and the focus of his rhymes is firmly fixed on his native land. I'm not entirely convinced that it justifies Hook's self-drawn comparisons with Burns and Irvine Welsh, but perhaps I just need to update my perceptions of Scottish hip-hop. Sam Inglis 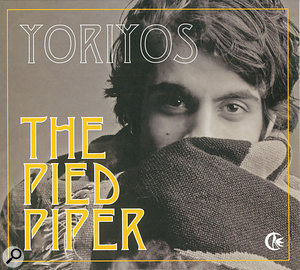 The artwork and presentation of this CD, featuring a close-up and emotional-looking Yoriyos, is great. What accompanies the disc is somewhat of a mystery. Titled 'News From RARECHORDS', it is pretty much a made-up mythical tale that has no real beginning or end, and no real content other than words that sort of go together. The letter starts with "what follows is unashamedly pretentious, so feel free to proceed straight to the CD and get this ordeal over and done with". The letter closes with "For further enlightenment please contact Princess Jody Dunleavy".

Those lines alone made me, at best, very wary about giving this a listen, and I must admit to feeling some relief when I realised there was only one track on the CD. But it is not the terrible tree-hugging stuff I had feared. Sure, there are a lot of pipes, but we are spared the reverb-drenched mess that I had anticipated, and in fact, there's quite a nice, dry, punchy mix. Annoyingly, though, the percussion is all panned hard left, which is distracting at best.

Having put some thought into how I would describe the music of Yoriyos, I would put it like this. Yoriyos replicate the demos from early Casio keyboards extremely well, but with real instruments. Maybe it is the fault of the pipe. My summary: harmless. Pete J Thomas

This month's winners are the Quays.