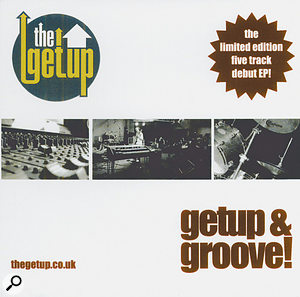 The Get Up Getup & Groove

The James Taylor Quartet, that's who the Get Up are trying to emulate, and if you ask me, they're doing a pretty good job. One could liken them also to Corduroy, who I've heard are among the best live bands in the UK. The Get Up's line–up is guitar, bass, drums and Hammond organ, all of which are played very well. Their five–track EP is very hard to criticise, but if I was to dig deep and find faults to wag a finger at, there would be two things: firstly, with the exception of the first track, the songs are quite repetitive, although that goes with the genre. The second point is that there's some gross fuzzy distortion on the guitar in places, and it really grates. It's not recorded badly, I think it's just a bad choice of distortion setting.

I saw the James Taylor Quartet once, at a tiny open–air folk festival at a pub called the Five Miles. There were about 100 people there — it was packed — and everyone was dancing round their halves of scrumpy. Fabulous, it was. Chris Mayes–Wright 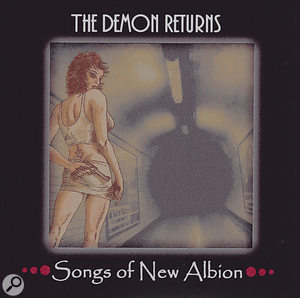 Jeff Cooke currently makes a living fronting tribute acts, and The Demon Returns is his bid to break out of covers–land and find success with his own material. As you'd expect from someone who has paid his dues on the chicken–in–a–basket circuit, Jeff is a strong singer and a better–than–decent guitarist. Yet, perhaps as a consequence of so much time spent inhabiting the shoes of others, he doesn't quite seem to have found a musical voice that's all his own.

The key to the success of bands like Franz Ferdinand or the Killers is that although their music has obvious '80s references, you'd never actually mistake them for '80s bands. It's a subtle difference, but The Demon Returns fall the wrong side of the divide: the six songs included here come across not as new music with an '80s influence, but as pastiches of '80s rock bands. Closing track 'This Restless Life' is the most impressive, and wouldn't be out of place on a reissue of Genesis' Invisible Touch. Elsewhere, more attention paid to drum programming would bring rewards, and the mixes are a little bass–light; but most of all, I think Jeff needs to impose his own personality on his influences. Sam Inglis 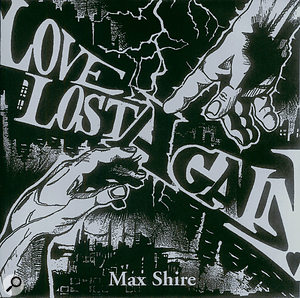 Max Shire is another artist who needs to find his own voice, and in a very literal sense. It's one thing to admire the music of, say, Radiohead. It's quite another to copy Thom Yorke's entire set of vocal mannerisms, especially the singing–through–gritted–teeth thing that is so very annoying. Equally, it is possible to hold the Smiths in high regard without aping Morrissey's singing style in forensic detail, as Max does on 'Happy Now'.

There are lots of positive qualities to Max's album, crisp recording, enthusiastic performances and a more than passing acquaintance with Mister Melody among them. But when you choose a musical path that is entirely based around inspection of your own navel, why present the results in voices borrowed from others? Sam Inglis 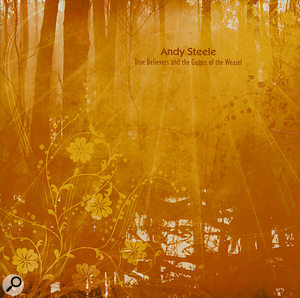 Andy Steele True Believers And The Guises Of The Weasel

Have you ever bought an album just because you liked the cover art? It's surprising how often music and design go hand in hand, and Andy Steele's album is a case in point. The craft that's evident in the artwork is equally apparent in the songwriting, and especially the lyrics, which are thoughtful and clever without being pretentious or insincere.

Andy's mordant reflections on lost love are set to a pleasant folk–rock backing, most of which is contributed by refreshingly real musicians playing refreshingly real instruments. Neil Yates' horn playing is a particular highlight, being unexpected yet totally in keeping with the mood. The recording and mixing are generally good, too, and the only improvement I can suggest would be to back off the compression, which would allow instruments such as bass and drums to breathe more naturally. Sam Inglis 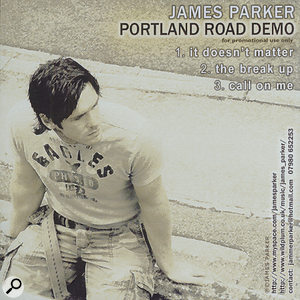 James Parker has lots of qualities that could bring him success. He's good–looking, he's got a powerful voice, and Andy Greening's production puts the important things up front, just as it should. So why write a biog that seems designed to highlight his weaknesses? Let's face it, no–one is going to be impressed by his claim to have written "over 20 tunes", or by the fact that he plays acoustic and electric guitar, while his full written lyric sheet is more of a liability than an asset. At least he has the good sense not to mention the fact that he sounds a bit like James Blunt. Sam Inglis 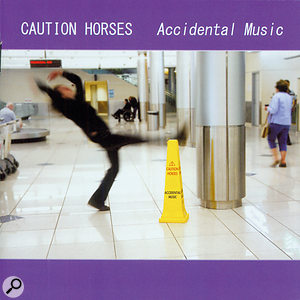 I'm not sure whether anyone has ever demanded that the Ipswich region produce its own answer to the Beautiful South, but should that situation arise, Caution Horses have all the necessary qualities: a voice with a distinct resemblance to Paul Heaton's, songs that fall squarely into the classic–songwriting–with–a–twist niche, and, if their band photos are anything to go by, a healthy disregard for image.

Acoustic guitars are to the fore in the Caution Horses sound, and like most of the other elements, are nicely played and recorded, although I'm not sure they benefit from being double–tracked throughout. The mixes cohere very nicely, with instrument sounds that seem odd in solo intros suddenly making perfect sense when the rest of the band kicks in. Nit-pickers might say that the lead vocal reverb is a bit obtrusive in places, the bass is a little 'toppy' on occasion, and the balance between close mics and ambience on the drums sometimes leans too far in the latter direction, but these are hardly devastating objections.

However, an entire album's worth of Caution Horses does get a bit samey. With the instrumentation remaining more or less identical on every track, there's not a great deal of variety in mood or colour. They're clearly a very able band, so it'd be nice to hear them leave their comfort zone a bit more often. Sam Inglis 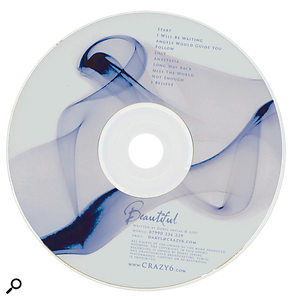 Bands in the '70s made a big deal out of saying "No synthesizers were played on this album", as though it were somehow cheating to use instruments that might actually have made them interesting. Likewise, Daryl Irvine of Crazy6 takes great pride in the fact that "Every guitar part on the album is either an acoustic Taylor guitar or an effected six–string bass". So what? Most people who listen to music couldn't care less how it was made, or how clever you were at overcoming self–imposed limitations.

What listeners might notice, on the other hand, is that there are a lot of mediocre guitar sounds on this album. Where it's recognisable as an acoustic guitar, that Taylor is thin and scratchy, and where it's trying to sound like an electric guitar, it's harsh and brittle. I'm sure Daryl's local music shop will be happy to take it in part exchange for a Telecaster, and everyone will be a winner.

Production–wise, Daryl seems to be shooting for an edgy, modern pop sound. He's got an excellent voice, and there are some nice piano and drum parts on offer, but the whole thing is hamstrung by his insistence on using such a limited sound palette. If he wants it to feel contemporary, the drums really need to be working in tandem with programmed beats and percussion, and there has to be much greater and more resourceful use of synths. His listeners won't be snobbish about where good sounds come from, and neither should he be. Sam Inglis 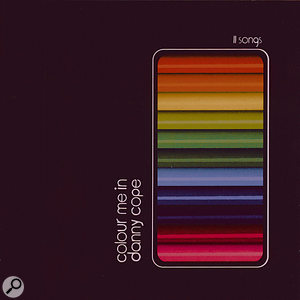 Danny Cope Colour Me In

If you're planning to hire a Cadillac and drive down Highway One with the top down and the wind in your hair, this is the album you need to bring with you. It's a real pop album: 11 songs, real instruments, singing. There's even lyrics written in the CD booklet.

Danny's songs are great; they're imaginative, and they thankfully don't give the listener those "I've heard this before" and "this sounds like..." feelings. The production is a real breath of fresh air, too. None of this over-produced, manufactured nonsense, just good, organic–sounding sounds blended in a frankly marvellous way. I really can't fault the production.

If Randy Newman and Jack Johnson met in the studio, they'd probably end up with something pretty close to Colour Me In. More, please. Chris Mayes–Wright 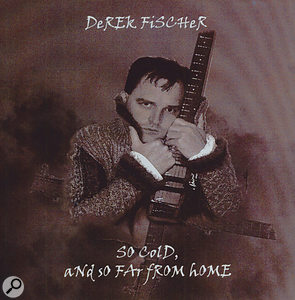 Derek Fischer So Cold, And So Far From Home

Derek Fischer and I are almost certainly at odds over the number of Sisters Of Mercy albums an ideal world would contain. For me, the figure hovers fairly close to the zero mark. Derek, on the other hand, clearly feels that there is a shortage of good old–fashioned goth–rock, and has set out to fill the void himself. Cue crunchy guitar riffs, doomy synth pads, liberal use of reverb, and angels with black wings sent to freeze icy hearts.

This sort of thing only stands a chance of working if you throw yourself into it wholeheartedly, and Derek does exactly that. If you made the mistake of thinking about it too much, it would be impossible to take seriously, but the commitment in his performances makes it easy to give in and enjoy the ride. The production values aren't what you'd call hi–fi, but the murky mixes and sleazy guitar sounds suit the material perfectly. I just wish I could say the same of Derek Fischer's jumper. Sam Inglis