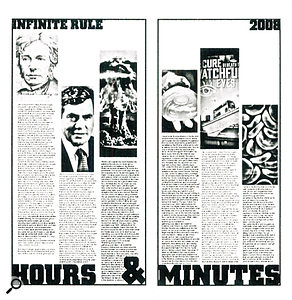 A probation officer by trade, Sam The Scholar has paired up with Afro Rizzy, one of the ne'er–do–wells in his charge, to make music. This is probably a very good way of achieving all the things that the probation service is supposed to achieve, so naturally it's a sackable offence on Sam's part. Consequently, Hours And Minutes are forced to conceal their true identities. (Of course, they may have made all this up to conceal the fact that they're actually accountants. I would, if I were a rapping accountant.)

Musically, Sam seems to hail from a guitar–oriented background, while Rizzy is a talented MC with plenty to say. Rock–rap hybrids don't always work, but this one does. The combination of urgent rapping and relentless riffing has a focus and energy that goes a long way towards overcoming the demo's technical shortcomings.

Most of the latter are to do with bass levels, which are skewed enough to suggest monitoring problems in Sam's studio. Not only are the mixes bass–light, with bass instruments mixed too low, but snare and tom sounds lack any of the fatness that can make you feel as well as hear a beat. Sam Inglis 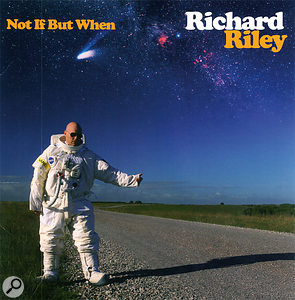 Richard Riley Not If But When

Hey Sam! This one sounds like a real record. There's live strings, brass, drums, nice–sounding vocals, well–recorded guitars, and proper songs with structure and everything. Richard Riley is pretty good.

Not If But When is a collection of 10 charming and quirky songs written and produced by Richard, which features a bunch of his mates, so it seems. According to the nice letter he included with the CD (and vinyl LP, which was unexpected), he uses mainly hardware, as well as some pretty nice guitars, mics and amps, to create his blend of cosy–sounding and completely inoffensive songs. These songs wrap around you like one of those giant fluffy blankets with the silk trim that you get in hotels — you know the ones I mean, they keep them in the cupboard with the spare pillow.

As for criticism, there's not much to say, although it sometimes sounds as though the drums, which are very well played, are a few tens of milliseconds behind the guitars, which could be the result of sync'ing multiple devices. This brings a certain slackness to some of the tracks, but who's to say that this isn't an artistic decision? Another thing that is a personal annoyance is the lyrical content on some of the songs. It's been said here before that 'ooh yeah', 'uh–huh', and 'woah' are not words, and don't really need to be uttered after every line of every verse. For my liking, the first song, 'Evie', is blighted by too many of these embellishments, and it's made even more cringeworthy by the almost Travis–like repetition of the name Evie, sung in such a way that the entire song sounds like a tribute to a certain auction web site. Apart from this, I really like the album, and might even keep a couple of the tracks on my iTunes. Chris Mayes–Wright 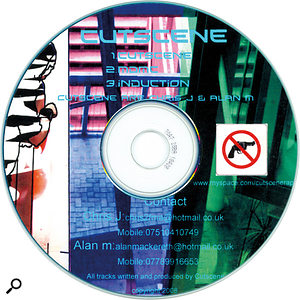 If you were on the lookout for the cutting edge of urban music, you probably wouldn't expect to find it in Preston. (Come to think of it, I'm not sure what you would expect to find in Preston, although Wikipedia tells me that it has a very comprehensive bus network.) That fair city is, however, the home of Chris J and Alan M: two producers who, as Cutscene, "suggest that you big up your chest for the North West".

Since no MCs are credited, I'm guessing that Chris and Alan have taken on vocal duties themselves. Either way, the rapping is definitely the best feature of this demo: ferociously intense yet intelligible, natural and unforced.

The duo also have some neat production ideas, although sampling Monty Python's Life Of Brian is not one of them. The combination of out–of–tune Spanish guitar and Nine Inch Nails synths on 'Induction' is very effective, and the sound is abrasive and confrontational throughout. There are, though, ways in which it could perhaps be made more effective with some different mix and arrangement choices. For instance, there's something suspect about the overall balance on the first track, as though a 'smile' EQ has been pushed too far, and the contrast between the searingly bright acoustic guitar and the dull–sounding beats leaves the latter feeling small. Sam Inglis 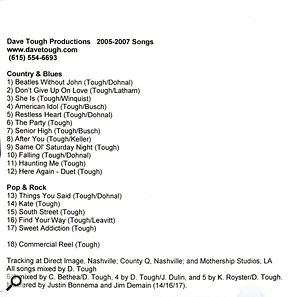 Diving into a big box of demos can be a test for the will, and unfortunately some packages have a tendency to go straight back in without making it into the CD player. Seventy–four minutes of New Age meditation music? Not today, thanks. And, if I'm honest, probably not tomorrow.

With a dry track listing that divides 18 songs into 'Country & Blues' and 'Pop & Rock', Dave Tough's demo CD is among those that requires some resolve from the listener. He's clearly serious about the business of being a songwriter, though, and thankfully, this has led him to hire some excellent musicians and vocalists. They're put to work on material that is, at best, really good. Few of these cuts would be out of place on a modern country station in the States, even in their demo state.

However, the business of songwriting is a fiercely competitive one, and there are times where Dave's output feels a little too generic to stand out. His songs are never less than supremely competent, but only a few, such as the opening 'Beatles Without John', have the sort of attention–grabbing lyrical or musical quirks that could lift them above the crowd. Sam Inglis 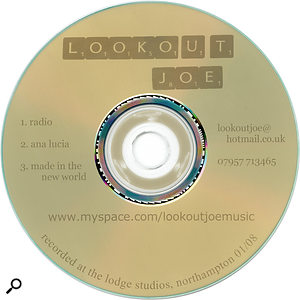 If their press release is to be believed, Lookout Joe are simultaneously "emerging from the up–and–coming Coventry scene" and "jumping straight out of university". What's more, they are all "classically trained graduates", and it shows. Like the Ben Folds Five, there are three of them, and they spurn the common–as–muck guitar altogether, instead placing the grand piano at the centre of their sound.

Lookout Joe's technical ability is beyond reproach (unlike their use of brick-wall processing on the master bus), and their enthusiasm is infectious. Whichever of Ed, Ben and Drew is the singer (it doesn't say) has a fine voice, and they're not afraid of variety, with ska, jazz, blues and Latin music all rearing their heads at various points.

Despite the band's obvious talents, though, there's something naggingly unconvincing about their demo. Lookout Joe's stylistic dabblings have something of a dilettante quality, and although the band seem very proud of the fact that "Ed's Latin American travels have a strong influence on the lyrics", the end results have a tendency to sound a bit like a gap–year student's Livejournal entries set to music. Sam Inglis 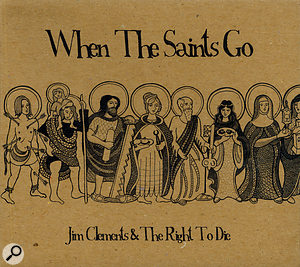 Jim Clements & The Right To Die When The Saints Go

It appears that James Blunt has been moonlighting as a man called Jim Clements, and has formed a band called Jim Clements & The Right To Die. How his bandmates didn't notice is a miracle, since Blunt is one of the most annoying men alive.

Anyway, we're limited to how many times we can use James Blunt's name in each issue, for sanity more than anything else, and if we draw too much attention to Blunt's second income, Her Majesty's Revenue & Customs may be alerted, and we wouldn't wish that upon anyone. So on with the review.

Despite the band having the word 'Die' in their name, they aren't a bunch of grubby goths, more a rabble of folky types, with a line-up of guitar, bass, vocals, drums, keyboards and violin. When The Saints Go is a concept album of sorts; the songs are all quite 'folk–rock' in arrangement, sometimes verging on the Balkan gypsy style, but all distinctly weird, with James Blunt (sorry, Jim Clements) singing. Oh, and yes, there is a version of 'When The Saints Go Marching In'. It sounds like a ringtone.

On the technical side, I'm not keen on the timbre of the violin — it's clearly electric, and sounds very un–violin–like, except when it's at the very back of the mix, when it seems to blend reasonably well with the other instruments. The piano sound is also fairly weak when it's being played on its own or with little else in the mix. On the positive side, the drums are good; there's quite a lot of marching snare kind of stuff, and the backing vocals work well whenever they're heard. Importantly, Jim/James' guitar sounds sweet and spacious, and in the last song, 'Mayfly', he sounds less Blunt–ish, which has to be a good thing. Chris Mayes–Wright 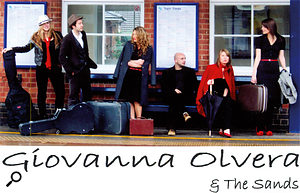 Continuing the geographical theme, we're told that Giovanna Olvera's music has "presence in the Midlands". It also has presence in the treble region, and plenty of it. Something has gone awry with a mix where acoustic guitars and hi–hats sizzle like pork chops falling into the sun, while there's a black hole where the bass guitar should be. Giovanna and her band are all very capable performers, but their music really doesn't suit this sort of over–bright, fatiguing production.

The tuneful, jazz–inflected pop–soul on offer is a little reminiscent of artists like Corinne Bailey Rae, and if only the gentle sunniness of the music was reflected in the mix, it'd be a very pleasant listen. There is, at least, a glimpse of what might have been on the third song, where the offending drum kit and acoustic guitars are dropped in favour of hand percussion and mellow electric chords. I'd love to tell you what it's called, but despite sending three closely typed pages of A4 bumph, her management don't seem to have found space for a track listing. Sam Inglis

Specialists in CD, DVD and vinyl replication, Breed Media offer unique membership benefits to their customers. They are also environmentally focused: recycled products and certified CarbonZero status mean they are truly a new breed of replicator.

This month's winners are Hours And Minutes.