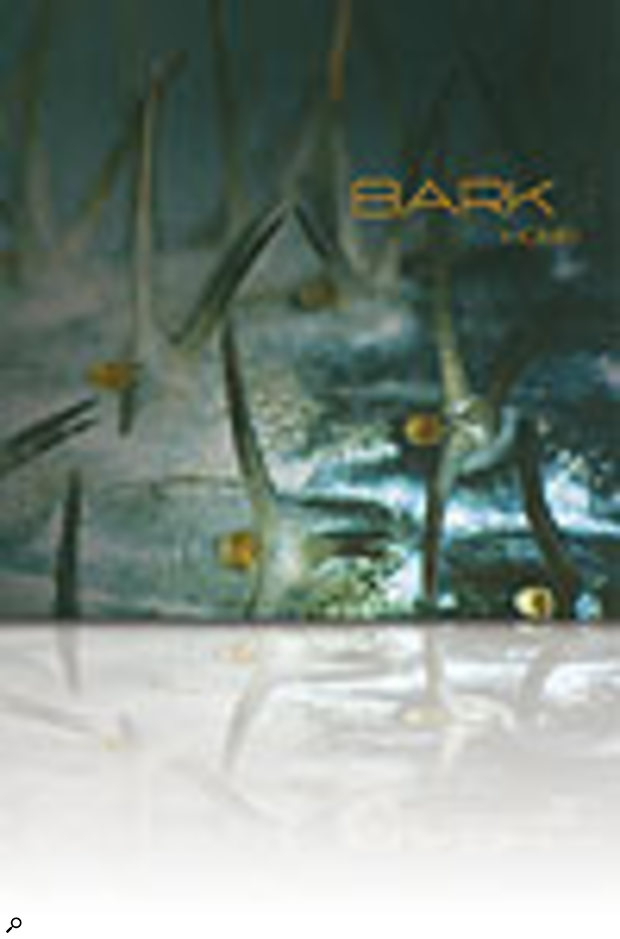 CD Of The Month - Bark

Bark are singer Angeline Conaghan and programmer Terje Evensen. Their album Home is something of a rarity: an LP that defies classification, without sounding as though every song was written by a different person. The definition they give is 'glitch-pop', which covers some of the bases, but there are too many influences here to single them all out — Björk is one of the more obvious ones, but there's a bit of pretty much everything, from polished, glossy pop to downright weird ambient electro, via rock, trip-hop, breakbeat, jazz and God knows what else.

What's really weird, though, is just how much sense the album makes as a whole. I think this is partly down to Angeline's very distinctive singing voice, but Terje has a unique production style and an ear for pleasant surprises, which this album is full of. Just as you're trying to make head or tail of a frankly bizarre, almost abstract intro, you'll be overwhelmed with easy, laid-back guitars and drums of the sort you'd expect to hear on a pop record. Let your guard down, however, and you'll be plunged straight back into Angeline's eerie, disjunct stream of consciousness, set to a backdrop of dark pads, uneasy electro beats and other sounds so odd that I couldn't begin to guess their origin.

Niko Tsonev's CD arrives in one of those see-through clam-shell cases, with no further information apart from a sticker telling us to look at his Myspace page for 'info, bio and pics'. There's a hint of arrogance in this approach to sending out demos. If Niko expects A&R men to go to the trouble of booting up their computers just because he can't be bothered to write a letter, he's going to be disappointed.

There's also more than a hint of arrogance in Niko's music, which turns out to be principally a vehicle for his skills as a guitarist. The CD begins with a tricksy acoustic piece, before his backing band are wheeled out for some torrential electric soloing. The full-band tracks showcase a wide range of guitar sounds, including what sounds like some neat guitar-synth work, and demonstrate without a shadow of a doubt that Niko can play the guitar very, very fast. As is so often the case, though, you soon begin to wonder what the point of it all is, especially during an artistically redundant fretwanking assault on Stevie Wonder's 'Superstition'.

The overwhelming impression is that this CD must have been a lot more fun to make than it is to listen to; and though you can't help admiring Niko's command of his instrument, you'd think twice before inviting him to join your band. In the final analysis, it's not the ability to cram a hundred notes into a bar that makes a great guitarist. Technical skill needs to be matched by self-restraint, and a player needs to be sensitive to other musicians and to his material. It may be that Niko has those abilities, but he doesn't display them here; and as a result, this just sounds like showing off. Sam Inglis

A real Dear Deirdre letter accompanies this CD from Matthew Gough, who's agonising over "what to do with my musical talent". Like lots of songwriters, he's confident in his material and his production skills, but insecure about his singing voice, and seeks advice about the best outlet for his music. "Do I try to place this sort of work with publishers?" he asks. "Or do I give the songs to studios and pay them to produce more commercial demos?"

Well, Matthew, I hope you'll forgive me for being blunt, but the answers are no. And no. And, if you're serious about 'placing' your songs, my advice would be to lock yourself in a room for three months with nothing but a radio for company. The problem here has nothing to do with your singing voice: it's that, despite name-checking artists like Athlete and David Gray, you don't seem to have listened to any music made since 1987. I'm not sure which singers you imagine recording your songs, but I can't imagine any publisher being able to place them, for the reason that there are currently no chart singers who model their sound on a genetic experiment involving Billy Joel, Huey Lewis and the cheese counter at Tesco's.

That might sound harsh, but I can't think how else to bring home the point. If you want to be a professional songwriter, you have to identify the artists you want to write for and create something that fits their sound. It's no use assuming that the songs you write for your own amusement will be marketable, because they won't — especially if they appear to have fallen through a time warp from two decades ago. If you want to stand a chance of placing your songs, you need a more up-to-date sound palette, but above all, you need to listen to artists who are having hits now, and think about what might appeal to them. Sam Inglis

Is This A Problem

Pulsediver are a four-piece band hailing from Amsterdam, and being a Dutchman myself I thought I'd give them a chance. This was quite a big risk, given our track record for musical exports — remember 2 Unlimited? The Vengaboys? Fortunately, Pulsediver sound nothing like those jokers, and while their grasp of English leaves something to be desired, their music is pretty good. If you like stoner rock.

I like stoner rock. It's not big, it's not clever, but damn, it's funny! Gratuitous drug references, fuzzy-as-you-like guitars and painfully simple riffs: Pulsediver pull them all off with conviction. The rather nasal delivery by female vocalist Mariska lets them down slightly, though I have a feeling she accentuates this to make her sound more serpent-like (it's a Satanic thing, you see).

All in all, they're a pretty good band with an enjoyable take on the genre. I think bands like this need to exist, if for no other reason than the fact that there is very real chance of Dave Wyndorf OD'ing before he records another Monster Magnet album. If I could offer Pulsediver a word of advice, though, I would strongly urge them not to print their lyrics on the CD liner notes. While lines like 'I like beer, black vodka and gin / and you were right, yeah baby, I'm in!' are sure to find universal approval, I couldn't help but chuckle at the use of the word 'stucked', and the accidental comic genius of 'Touch my famous body part!' had me in stitches. Chris Korff

"It took me about six weeks to do the recording and about three months to mix it," admits Callum. There are 14 tracks on his album, so that's not too crazy, although ideally you might expect things to pan out the other way around.

Callum's strongest weapon is his powerful voice, and he's rightly kept it centre stage in these productions, but I would question his choice of vocal effects. In the first song, for instance, there's a short stereo delay or a reverb with too much pre-delay, and the net result is to create a disconcerting, out-of-time ghost vocal part underneath the main part. Other songs use a very bright vocal reverb that brings exaggerated sibilance, and I can't help feeling that the album as a whole would sound more coherent if Callum had settled on one good vocal sound as a starting point for all, or most of the tracks. The same goes for his use of reverb on the drums, which is sometimes way over the top, and sometimes makes them sound weirdly comb-filtered.

The album as a whole is a succession of mid-tempo rock tracks and acoustic ballads, each vying to sound more epic than its predecessor. Callum has a nice selection of guitar sounds and an ear for a sweeping melody, but I wish the latter wasn't paired to such hectoring lyrics. Sometimes he goes in for experimentation, with mixed results: the weird guitar effects on 'Nothing's Impossible' work very nicely, but the sampled choir on 'Come On Tell Me' is horrible. There's plenty of power in his mixes — which is good, although it sometimes leads to ugly distortion — but his arrangements could use more work. Too many of the tracks settle into a repetitive, looping groove instead of developing, and after a while, your attention tends to wander. Sam Inglis

I never know quite what to make of bands like Remus. Objectively speaking, they've got some nice original songs which are catchy and, crucially, very accessible. Their Travis/Coldplay-esque brand of soft rock won't have mum changing the radio station because "it's just not music", nor will it put kids off — after all, guitar bands are cool. In fact, I can't imagine anyone really disliking them, and that's precisely the problem.

I wonder, sometimes, whether it's possible to write music that people really love, when you go out of your way to make sure that no one hates it either. Where a song's only apparent remit is to not offend anyone — be it the other band members, the audience or a panel of marketing strategists — it will invariably end up exciting approximately nobody, and that, I think, is where Remus have gone wrong. The musicianship and recording skills are there, but there's something contrived about the eighth-note guitar chords and painfully predictable section changes that really bugs me. It's as though their writing process consisted of saying "It worked for Band X, but we should probably change this part a little bit."

Whether Remus consider comparisons to Travis and Coldplay a good thing or not, I have absolutely no idea. If I was in their shoes, I'd probably want to hunt down and kill me for making those comparisons, but then who am I to say? Just because I can't stand mainstream, wishy-washy music doesn't stop it from being commercially viable. To that end, I suppose they've accomplished something — a well-played, well-recorded product. Chris Korff