Games music needs to be bolder...

We are musicians and composers, and we both started out playing in and producing bands. We were also both avid computer games enthusiasts growing up, so when the opportunity arose to start writing game music, we took it.

We love the youthfulness of the industry, and the puzzle of writing interactive music. We've also been very fortunate to have had a lot of creative freedom in some of the projects we have worked on. However, as we've become more involved in the games world, we've noticed that a lot of games sound quite... similar. Many developers seem to default to a 'Hollywood blockbuster' style of soundtrack based around bombastic orchestral scoring, epic percussion and Carmina Burana choirs. This style, though exciting when first heard, has been used so much in all forms of entertainment that we don't really notice it any more. It feels strange to us that a young, dynamic industry would follow such a well‑trodden path.

The games industry often looks to the film world for cues and pointers, and not just with soundtracks. Film has the prestige of a long history and the glamour of the red carpet. In time, we believe that the games industry will have these things too but, at present, film is still seen as games' more serious older cousin. Orchestral scoring is the accepted practice for films, especially in conservative Hollywood. This descends from a long line of entertainment history, right back to the opera house and ballet theatre, where an actual orchestra would play along with the action on stage. The film with recorded soundtrack is almost 100 years old, and throughout this time, the vast majority of films have been scored using classical orchestral instrumentation. It is reassuringly familiar for the audience, and less of an artistic risk for the producers. 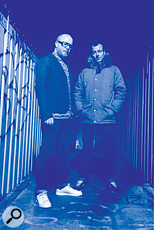 However, when people do something new, and do it well, it gets noticed. Think of Vangelis' Blade Runner score, or Roy Budd's Get Carter soundtrack — these are a big part of what makes these films memorable. But games are a completely different experience to film, and should be the perfect medium for innovation with music. They are a much longer art form, often providing 10 hours of gameplay rather than two hours in a cinema. Most big games today also offer an immersive, interactive experience. Lastly, films tend to be shot and edited before the soundtrack gets added, making music the final, and often a rushed, process. With games, music is involved a lot earlier in the process, allowing more time for composers to try out different ideas and even to feed back into the rest of the game's development.

This is an industry that is, if not in its infancy, at least in its adolescence. It is not weighed down or locked in by history, or by an accepted norm of what a game should sound like. The people who make them are the children who grew up with rock, hip‑hop, and all forms of electronic music. In fact, many of them have witnessed the birth and entire history of these last two genres, as they have that of computer games in general.

We as musicians can do things that were impossible in the equivalent early days of film, when there was far less sonic choice for composers. Don't get us wrong, we're not anti‑orchestra: there will be games that suit this style of instrumentation perfectly, but it doesn't always have to be epic!

Scores such as Red Dead Redemption, The Last Of Us and Hotline Miami represent an exciting look into the future. Their styles are perfectly suited to enhance the mood, pace and setting of the games they weave through. They don't sound generic and have their own sonic signature that sounds like the developers really took time to work with the composer.

We have met many others who share our feelings, and have been encouraged that things seem to be moving in a more interesting direction. There is a lot of innovation in indie games, often driven as much by financial restrictions as creativity, but big developers are also producing some great original scores.

So, let's open our minds to new possibilities. A stand-out score can give a game a whole extra dimension. Let's take time to experiment, and find a sound that mirrors what makes each game original.