Sounding Off: Bad PR In The Music Business

The music biz is a notoriously difficult one, but you might think that at least the people who get paid to work for you are on your side. Sam Inglis says it's even worse than you thought.

Picture the scene. After years of graft, the ink is finally dry on the record deal that's going to catapult you into the major league of pop gods. You've spent four months in the most expensive studio in the land with the best producer around, and recorded what in years to come will be considered the definitive album of the 20th (or 21st) century. Nothing can possibly stop you crashing straight in at Number One and remaining in the top 10, Dark Side Of The Moon‑style, forever — or can it? 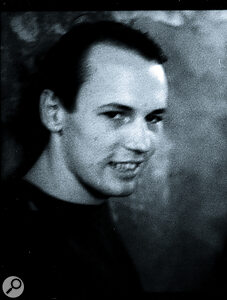 Sam Inglis.If this is what you think, you're reckoning without The Enemy Within. And I'm not talking about musical differences within the band, or arguments as to what should be on the rider when you play your sold‑out fortnight at the Albert Hall. I'm talking about the employees of the very record company who are paying your wages (well, lending you money, anyway).

Now, as everyone knows, you won't sell any records if nobody gets to hear or read about your music, and nobody will read about your music unless you get coverage in newspapers and magazines — and you won't get coverage in newspapers and magazines unless someone helps, badgers, and encourages those publications to write about you. Which is where the problem arises. Like any music magazine, Sound On Sound is largely dependent on the people employed by record companies to do just this. And I have no doubt that somewhere there is a record company press officer who is courteous, efficient, hard‑working, reliable and possessed of more than half a brain. But I've seldom talked to one with any of these characteristics, let alone all of them.

You might expect that the function of someone who has the job title 'press officer' would be to gain exposure for the artists in their charge, not to obstruct any attempt whatsoever by humble journalists to obtain any sort of information about them. In fact, however, press officers are masters of the art of unhelpfulness.

Their initial tactic is simply to make themselves inaccessible. It's inevitably the case that any artist you want to find out about is signed to a record label which was once independent, but was long ago swallowed up by a larger one, which was in turn swallowed up by a larger one, and so on. What this means, in practice, is that the only way to reach the right press office is at the end of a long chain of other press offices and receptionists — and then only when you've managed to work out which of the majors Farty Boy Records is actually a subsidiary of a subsidiary of.

The press officer's second line of defence is voicemail. It's a golden rule of record company press offices that no‑one ever answers the phone — or, God forbid, that there should even be a number which is just the basic press office number. Instead, everyone who works in the press office will have their own phone, which you are put through to on a random basis. You will then get a voicemail message along the lines of "Hi, this is Eglantine [press officers always have silly names], I can't get to the phone right now [what's the matter, did you drop it down a well or something?], leave me a message and I'll get back to you." Leaving a message, of course, is a waste of breath, because record company press officers are congenitally incapable of making telephone calls except to book their appointments at hair salons.

Of course, the press officer isn't not answering her phone for no reason. She's actually got a perfectly good reason — she's in the pub, as you'll discover if (miracle of miracles) she's remembered to give her mobile number on the voicemail message.

Just occasionally, the defences will slip, and you'll somehow get through to the press officer you want to speak to (you could always try ringing the pub). But be warned — the press officer, as a species, is most dangerous when cornered. Her long round of free gigs, launch parties and afternoons in the pub interrupted, she will be terrified at the prospect of having to do some work for a change. Panicking, she will promise you anything — interviews, promotional copies of singles, even photographs of artists — if only you will "send her a fax with a few details". These promises are LIES. The interview will never take place, the promotional copies will never arrive, and the photographs have never even been taken in the first place. And so the poor artist, starved of the oxygen of publicity, disappears into the murky world of record company tax losses, never to be seen again.

So what does this matter to you? Isn't it just the whining of a frustrated Assistant Editor? Well, yes it is — but before you sign that make‑or‑break record deal, think about checking out the company's press office. It's frightening to contemplate, but they're the ones with the power to make or break you. And do you really want to leave your future success in the hands of someone called Eglantine?