The wind rushes past my ears in rhythm with my horse’s hooves. I slow, listening to the rain falling on the long grass of the African savannah, and peer through my binoculars. Plaintive strings rise to give me some mood setting. The sound is deep, rich, immersive, and created rather than recorded, because the world I’m in is that of Hideo Kojima’s Metal Gear Solid.

Video games use sound in a far more integral way than any other medium. It’s world creation; and the creation of a world which you will inhabit and experience with agency. It is your guide, your prompt, your early warning system. It is the crux of this false reality.

The complexity of sound design within games is also developing exponentially. The pseudo-living city of Rockstar’s Grand Theft Auto is populated by the radio links between real world songs, snatches of a passing pedestrian’s mobile conversation or the call of a passing seagull. It’s a very long way from the beeps and plonks of Pong or Space Invaders. 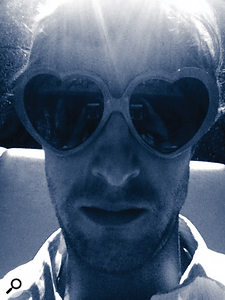 Film is set in its ways, blandly going through the numbers, fake smile plastered on its face and content in being too big to fail. Film is U2. Hans Zimmer’s Inception ‘bwahms’ are now overused to vuvuzela levels of annoyance. The faux sci-fi leanings and tinnitus ringing of Bayhem — yes, that is what Michael Bay calls his own film-making style — are just as ubiquitous. Every horror film, even the good ones like Babadook or It Follows, telegraph every scare with the same stock string sample.

It’s as dull and predictable as second-unit shots establishing a character’s change of locale, panning left to right for driving shots before cutting to a helicopter shot of the new city with uplifting music playing — seriously, every movie does this.

American developers Bethesda released their fantasy epic Skyrim in 2011. Four years on and it is still selling — a fact that studio head Todd Howard puts down to the depth of design. “We crafted everything with a high-concept idea of how it would fit into the world, the change in pitch of the wind at different altitudes, softening footsteps in snow at lower levels but giving it a cracking ice layer at high ones. We spent weeks just working out how many decibels the dragons would be able to generate. All relative to our game world,” he told Ars Technica.

The Mass Effect trilogy was the most successful narrative-based franchise on the previous generation of home consoles, selling 11 million copies. Composer Jack Wall praised the games’ ambient and incidental sound design, saying that, since so much care had been taken to build an aural world, all he had to do was get some Theremins and watch Solaris and Silent Running. He underplays it — his soundtrack is widely considered one of the best to date.

These examples may be alien to someone who hasn’t been around the games industry recently, but there is one piece of game music that’s crossed all cultural boundaries. It’s that of the Super Mario Brothers franchise.

At its release in 1985, Nintendo’s NES console generated its sounds as all games did in those early days: with SID chips, FM synthboards, Music Macro Language and MIDI interfaces. In fact, its iconic theme was developed by accident as the console’s chips couldn’t accurately recreate the steel drum calypso sound composer Koji Kondo wanted. The theme was to be scrapped before the father of the series and its lead designer, Shigeru Miyamoto, personally stepped in and decreed it to be used as the canonical theme.

There are so many more great examples of sound in games creating a living world, whilst in films it so often simply covers the walls as audio make-up for the sets. Many indie games developers’ budget-imposed lo-res graphics are cleverly supplemented using sound to generate depth and to bridge any isolation created by the poor visuals.

No other medium is doing more with sound. TV is dying; convenience and streaming will kill it off. Cinema has been trying to cling on with 3D fads, but gaming has become not only culturally mainstream but artistically relevant and innovative too. It’s also an industry worth over $84 billion, and as all gamers know, ‘the numbers don’t lie and they always go up’.

Michael Greenhalgh is an embittered Northerner and video games journalist. He is currently hiding in a cardboard box, somewhere near the Angola-Zaire border.