Sounding Off: Threat To Your Livelihood Skip to main content

Sounding Off: Threat To Your Livelihood

What’s the biggest threat to your studio livelihood?

“You don’t know what you’ve got till it’s gone”: those lyrics of Joni Mitchell’s, from ‘Big Yellow Taxi’, always struck me as perceptive. And just recently the full meaning of the phrase came crashing down on me, forcing me to reevaluate all aspects of my audio-related life.

What am I talking about? Hearing, that’s what. It started with an autumn virus that had a bit of a mean edge. Sore throat, high temperature, cough — nasty, but hardly serious in the grand scheme of things. 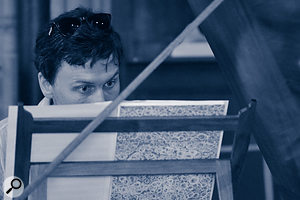 Then, just as I started feeling better, an intense pain in my left ear. Minutes later, a feeling my hearing had gone dead, accompanied by a constant tinnitus whistle. Surely just the bitter end of the virus, though?

Sadly no. A couple of days later I was giving a piano lesson, and as my student played a high passage it was as if all her notes were accompanied by out-of-tune phantoms. Weird. On the way home all the bleepy electronic detritus of modern life — mobile ringtones, warning signals in the car — were split and distorted in a similar way. What on earth was going on? Hearing some piped music in a shop (which sounded even fouler than usual) I systematically put my finger in one ear, then the other... and discovered with horror that everything in the left was bizarrely raised in pitch. Or rather, notes up to about a treble 'A' sounded almost normal, but above that the octaves stretched ever wider as if set by some crazed piano tuner, until all were more than a semitone out of whack. There were other strange frequencies flying around too, as if my brain had been retro-fitted with a rickety ring modulator. It would have been absolutely fascinating had it not also been so terrifying. All music was rendered hideous to behold, clashing and dissonant, and when I happened to speak to a high-voiced person on the phone, held to my left ear, they sounded like some shrill, nightmarish banshee.

I hit Google hard. It seemed I’d developed a disorder called diplacusis, or ‘Inter-aural Pitch Difference’, and whilst apparently not all that common it was at least documented quite well on several blogs and web sites. For some sufferers it had dissipated after a few weeks. For others the effect was permanent, probably due to damage to the tiny, delicate frequency-sensing structures of the inner ear, the stereocilia.

I had an utterly miserable conversation with my wife about what kind of life there could be for me with mangled hearing. My career as a musician would be over, and so would my involvement with recording and music technology. How would I make a living? But actually most depressing of all was losing the desire to simply listen to music, and everything that goes with that — pleasure, refuge, excitement, self-expression... In that moment (and with Joni’s words jangling in my head) I realised just what I’d had, how much it had underpinned my whole life, and how intensely I missed it now it was gone.

I visited my doctor expecting bad news, but in fact I learned I’d got a middle-ear infection causing distortion and inflammation of the ear drum, and it could be easily treated. Lo and behold, after 10 days of steroids and antibiotics (during which period I toughed out playing three cacophonous gigs) the pitch shift magically, mercifully, disappeared. I’ve been able to work normally ever since, and music sounds as sweet as ever. Something has permanently changed, though. I value my hearing now in a way I never had before. Perhaps there’s no avoiding viruses and bugs, but I no longer assume I can slam my ears at gigs, or sit in fronts of trumpets, drums or blaring monitors for hours, and keep getting away with it. Some bespoke ear plugs are on their way...

We form an extremely broad church, us musicians, arrangers, composers and engineers. But we’re united by a love of music and fascination with sound that relies totally on being able to hear it properly. So I urge you, think of Joni, cherish and take care of your hearing, and if you must put up a parking lot, for goodness sake wear some ear defenders.

Robin Bigwood has been writing for SOS since 2001, about DAWs, pianos, sample libraries, and a whole lot of nerdy stuff that most other (sensible) reviewers wouldn’t want anything to do with. He’s also a harpsichordist and pianist, and teaches at Birmingham Conservatoire.