Sounding Off: Is Online Collaboration A Good Idea? Skip to main content

Sounding Off: Is Online Collaboration A Good Idea?

I was reminded of this strip recently when I saw Avid’s announcement of Pro Tools 12. This new version includes something called Avid Cloud Collaboration that enables Pro Tools users to collaborate together online, Avid says, “as if you’re all working together in the same studio.” The company even posted a handy video to explain how this might work, with the narrator proposing how you could “Track riffs with your favourite guitarist in Atlanta, drop in a drum track from Dubai, or lay down the leads from Shanghai.” Sounds great, right? There’s just one problem: it’s been tried before. 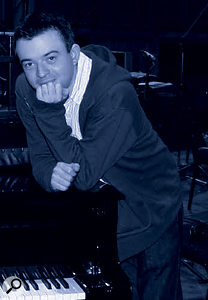 In the late ’90s a company called Rocket Network was founded, which had grown out of the ResRocket Surfer Project that allowed musicians to collaborate online using MIDI. The company developed a technology called Rocket Power that allowed audio to be shared over the Internet and convinced some of the leading music and audio developers of the day to integrate it into their products. There was a Rocket-Powered Cubase, a Rocket-Powered Logic, and yes, a Rocket-Powered Pro Tools. Around the turn of the millennium, you couldn’t avoid seeing Rocket-Powered demonstrations at trade shows or on Tomorrow’s World.

Digidesign officially announced Pro Tools 5.2 with what they called “DigiStudio Internet Collaboration” on September 22nd 2001. According to the press release, DigiStudio made possible “creation and collaboration in Pro Tools sessions remotely from any Internet-enabled location” with “rapid, rich exchange of Pro Tools material, from audio regions to playlists to plug-in info”. And the Digidesign Production Network web site, where you managed your DigiStudio account, was to offer “Talent Brokerage — a large, global database of audio community talent — to find collaborators for online sessions”!

Unfortunately for Rocket Network, the company proved not to be financially sustainable. They were acquired by Digidesign in 2003 for $2.3 million and the service was shut down. So why did Rocket Network, with support from all these Rocket-Powered versions of popular applications, fail?

I think the biggest problem is that nobody actually works this way in the real world, starting a song with your guitarist in Shanghai, your bongo player in Quebec, and your theremin player in the Ukraine. And I would go further and propose that nobody wants to work this way either. The best collaborations between musicians generally happen when people are in the same physical studio, and any virtual alternative is usually just a compromise. Even products like Source Connect, which enable you to remotely monitor a session, fall into this category, because I don’t think anyone would argue that producing a session via Source Connect is as good as or better than being sat in the actual control room where the session is taking place.

Some would argue that the Internet of 14 years ago wasn’t quite ready for what Rocket Network was trying to do, and there may be some truth to that. But what Avid are offering in Pro Tools 12 doesn’t seem that functionally different in terms of workflow to what they offered back in Pro Tools 5.2. If enough people didn’t use it then, what’s to say they will now?

I don’t mean to single out Avid here, because so many companies have failed in creating successful Internet-based collaboration products for musicians in the past, Rocket Networks included. Anyone remember Tonos? More recently, did you use Digital Musician? And if you type “online music collaboration” into a search engine, you’ll find a huge number of products all claiming to have the solution for that query. Even Propellerhead are trying to get in on the collaboration act with the recently announced Discover service.