If you’re wondering “André who?!”, let me fill you in. Over the past five years, the albums of this perma–tailed violinist and his schmaltzy classical orchestra have spent more than 120 weeks in the UK top 40. Whether or not his brand of easy–listening floats your boat, there is much to admire in the craftsmanship of his productions, as demonstrated by the title track of his sixth top–10 record, Love In Venice. 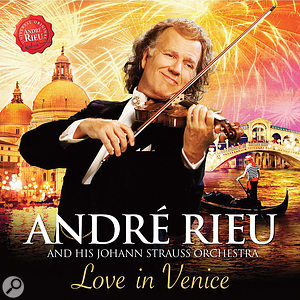 What might appear to be a fairly traditional large–scale classical recording, albeit one with the low–end opulence of a film score, has actually been rather carefully optimised for the mass market. First of all, the mix transfers extremely well to mono, despite giving no sense that the stereo image is constricted. Comparing the frequency balance of the Middle and Sides signals with a frequency–specific correlation meter reveals a couple of reasons for this: firstly, the frequency balance of the Sides and Middle signals are quite closely matched overall; and, secondly, the Sides signal very seldom overpowers the Middle signal level at any frequency. So, in practical terms, if you sum this mix to mono for single–speaker playback (as a lot of small consumer–grade playback devices do), thereby discarding the Sides signal, the mono listening experience remains remarkably representative of the stereo one in terms of both overall tonality and ensemble balance. In addition, Rieu’s solo violin scarcely features in the Sides signal at all (it might easily have been an overdub, in fact) and the instrument’s mic signal is panned dead centre, so the star survives the transition to mono completely unscathed.

Only at the low end does the Sides spectrum diverge from that of the Middle signal, tapering off rapidly from around 200Hz, rendering the mix all but mono below about 100Hz. What this means is that the low–end power of the music doesn’t suffer through all those affordable home–theatre, multimedia and automotive systems which combine tiny stereo/surround satellite speakers with a single more powerful bass driver.

This recording also takes single–sided listening very much in its stride, presumably partly by virtue of using spaced microphone techniques, which don’t rely too heavily on inter–channel level differences to generate their stereo illusion — so off–centre instruments remain reasonably well balanced in either single channel. But the ensemble layout has also helped, because it sounds to me as if the cellos and basses are fairly central, flanked symmetrically by the first and second violins. This matches bass lines and cello countermelodies fairly well between the channels, and also caters fairly evenly for both channels whenever the massed violins join forces for yet another soaring lead melody.

And don’t leave this track before appreciating its assured use of traditional ‘prepare–clash–resolve’ harmonic dissonance — standout moments include the juicy augmented–triad flavour first heard at 0:33 (the Cm9 chord’s Bb sustaining as a 6–5 suspension over D7) and the French–horn F# prepared within the Bm chord at 3:13, reiterated as a major seventh over G, then again as a major ninth over Em, resolving only in the staggered 6–5/4–3 double suspension of the modulatory A7 dominant chord at 3:21. Pure cheese it may be, but at least it’s well matured. Mike Senior 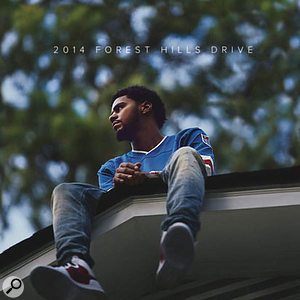 This recent cut from J Cole’s third consecutive Billboard 200 chart–topper immediately hooked me with the unusual delivery of its main vocal lyric, punctuated as it is by little breaths between the words. “I. Keep. My. Head high. / I. Got. My. Wings to carry me.” I’ve spent so much time analysing vocal performances, it can sometimes feel like there’s nothing new under the sun, but then something like this comes along — such a simple idea and yet so effective. The way Cole doubles his pace from the first verse (0:43–1:40) to the second (2:52–3:34) is another great trick.

But is that a bit of headphone spill from the (muted in the mix) main beat breaking through on the vocal mic at 0:09? If so, then I’m glad that kind of thing doesn’t just happen to me... Mike Senior

‘Do They Know It’s Christmas’ 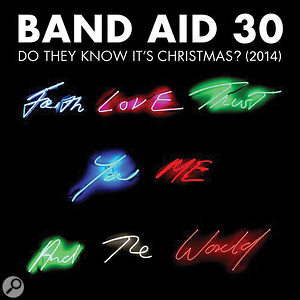 For all its good intentions (and indeed achievements), I can’t listen to this record without breaking out in a sweat. It’s hard to imagine what hell it must have been to get all these different singers to fit onto the same record. It’s bad enough trying to make sense of the differences in vocal style and tone with a live duet, but when you’re effectively trying to comp a complete performance from a couple of dozen independent overdubs by different singers it’s always going to be a bit of a car crash. Rita Ora’s machine–gun vibrato and R&B diva–isms make Sam Smith seem oddly bored at “throw your arms around the world” (0:46). After Seal’s throaty and fairly restrained performance, Ellie Goulding sounds like she’s had way too much coffee at “a song of hope...” (1:55). And then it’s back to earth with a bump as Sinead O’Connor’s hyperventilating intensity is followed by Bono’s hookline at 2:12, so phoned–in that it might have been a guide part left there by mistake. But it’s Goulding’s ‘woo–hoo’ at 2:01 that takes the biscuit for me, the cherry on the top of an already ruinously overwrought vocal confection — not only completely unnecessary, but also emotionally vacuous next to the rather more believable (if scarcely intelligible) huskiness of O’Connor. So just keep reminding yourself it’s for a good cause. Preferably between each line. Mike Senior 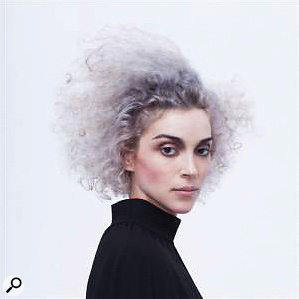 There’s something magical about a good sample–based stomp beat like this, where a four–to–the–floor kick-drum beat is combined with a heavy backbeat snare sample. What can be misleading to anyone trying to recreate these timbres, however, is that the snare comes across as being subjectively much rounder and thicker in the mix than it really is, simply because it’s normally heard in combination with the kick. Fortunately, though, the helpful kick–drum drop at 2:27–2:36 in this mix gives an objective insight into the true nature of the snare sample: while it certainly has a significant low mid–range pitched component giving it some weight around 170Hz, that frequency is very tightly damped to avoid muddiness, and otherwise the noisier components of the sample are focused much more into the two or three spectral octaves above. Mike Senior

While controlling sibilance is a constant battle for many who deal with mainstream vocal production, Christian productions have a particularly heavy cross to bear (so to speak) in that a number of crucial liturgical words incorporate ‘s’ sounds: ‘Jesus Christ’, ‘Spirit’, and ‘Saviour’, for instance. This barnstormer, from the singer’s recent Grammy–winning Gospel album Help, must have been purgatory (er...) in this respect, with six choruses each containing six iterations of “just a little more Jesus” (ie. well over 100 esses), with another couple of dozen sibilants in the verses. It doesn’t help that the lead vocal is so close–miked, bright, and compressed (as evidenced by the prominent lip noise at 0:09), because that can only have made the problem even trickier to deal with. 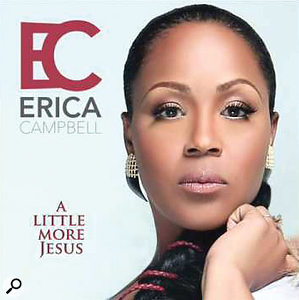 Although de–essing manually via fader or plug–in automation is my preferred solution on purely sonic grounds, you’d require the patience of a saint (sorry!) to attempt that here, and I suspect that an automatic de–esser has been employed here instead, not least because some of the ‘s’ sounds (for example “sir” at 1:09, “almost cussed” at 1:23, or “Jesus” at 2:45) verge on lisping — something of an occupational hazard when you have to set your processor to deal with average sibilants and then a non–standard one comes along. But, even disregarding these isolated lisps, I still don’t think the de–essing here has been handled as successfully as it might have been, because many of the esses have strong 10–12kHz spectral components that manage to sound harsh even when the consonant’s overall level has been reduced to within a whisker of lisping.

I reckon this is a situation where inserting a second split–band de–esser just for the upper spectral octave would likely have paid dividends, rounding off the sibilant timbre so that the first processor didn’t have to work so hard. As things stand, I think this production overall still remains just the right side of acceptable in terms of sibilance, and as such makes quite a good reference point if you’re agonising over ‘s’ levels and timbres in your own work. Mike Senior

It’s easy to obsess about gain structure in the digital studio, striving to eliminate every last vestige of noise from your signal chain. However, productions like this (the recipient of 1971’s Grammy for Best Engineered Recording, no less), leave me pondering whether we often throw the baby out with the bathwater. You see, both the piano and the voice have quite a rounded tone during the first verse, and I think the hiss serves a valuable purpose in giving the production as a whole a palpable sense of openness and air nonetheless. In addition, the added reverb effect seems to be in mono and contains few early–onset components, which means it doesn’t do a particularly good job of gluing together the close–miked mono vocal and the wide stereo piano into a convincing ensemble sound. Here again, the hiss fulfils an important function, namely creating a common sonic ‘frame’ around the two instruments in order that they bind together a little better subjectively. 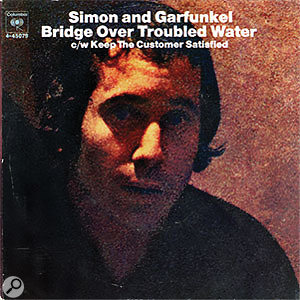 On the other hand, I’m not crazy about the third chorus’s sonics (from 3:20). This section comes across best on small speakers, to be honest, as these naturally attenuate the worst of the drummer’s saturated low–spectrum reverberant rumbling — on any moderately full–range system, it sounds like the room’s full of tumble–driers! Mono playback flatters things too, because under those circumstances the vocals, drums, and added reverb (all in mono) don’t sound quite as much like they’re coming from down a well as when they’re contrasted against the wide piano and strings images in stereo. You might argue, I suppose, that the texture’s memorable character excuses any concerns of pure sonics in pop terms, or indeed that the wide stereo sounds and expansive vocal line deliberately represent the titular bridge over the low end’s troubled water. Just don’t expect me to agree with you. Mike Senior