I’ve heard many opinions and beliefs, both sensible and crazy, but none so delusional as the notion that wire possesses magical properties that “science” doesn’t understand. On a recent trip to the local hi-fi emporium I saw 2-metre RCA cables ranging in price from $5.99 to more than $1000. I’m not a degreed electrical engineer, but I’ve designed dozens of audio circuits including EQs, preamps, compressors, and even test gear. I understand how this stuff works, so I’m amazed at the mystique surrounding wire because it’s such a simple component. 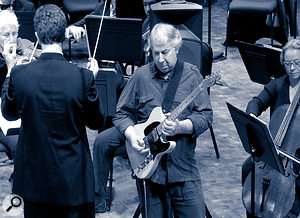 In some cases wire can affect high frequencies passing through it, and connector tarnish or bad soldering can cause distortion. But usually when people believe they hear differences with cables it’s due to improper testing. Everything about wire has been known fully for at least 100 years! A complete explanation requires more words than are available here, but I’ll hit the high points.

The most important wire properties are resistance, capacitance and inductance, and they increase when the wire is longer. (There’s also the tribo-electric effect — called ‘handling noise’ — but that affects mainly high-impedance circuits like piezo pickups.) Speaker wires carry relatively large amounts of power, so resistance matters most there. Resistance is a function of wire gauge, and any wire thick enough to carry the required current sounds identical to every other competent wire of the same gauge. Formulas to determine power loss versus wire length are simple and readily available.

Capacitance and inductance also manifest as resistance, though their effective resistance (called reactance) varies with frequency. The impedance of the connected devices also interacts with the cable’s capacitance and, as cable capacitance increases relative to the source impedance, high frequencies are reduced. But that’s audible only if the frequencies affected are below 20kHz. Inductance also affects high frequencies, though a wire must be several kilometres long before its inductance alone could affect the response audibly. Again, the formulas are simple and fully understood. There’s no magic, and all wires with similar properties sound identical.

Professional mics and most line-level devices have a low output impedance, which minimises interaction with a cable’s capacitance. You should be able to use pretty much any reasonable cable between your keyboard and stage amp without high-frequency loss. The same goes for guitars and basses with active electronics. But a passive guitar has no circuitry to ‘buffer’ the pickup’s high output impedance. So cables longer than three or four metres might affect treble frequencies depending on the cable’s capacitance. The receiving device’s input impedance is also a factor, though most inputs are suitable for their intended source. Plugging a passive bass into any bass amp is fine, while going into a mixer’s 10kΩ line input will likely lose high frequencies. But this loss is due to the incompatible impedance rather than cable capacitance.

Two additional cable considerations are shielding and balancing. With a single conductor cable such as a guitar lead, the grounded shield is intended to prevent radiated electric fields from impinging on the small audio signal voltage. If you experience hum it’s more likely a ground loop, or the pickup acting as an antenna, than inadequate shielding. Most professional audio gear can accommodate balanced connections using two twisted wires inside the shield. In this case the audio signal is the voltage difference between the two inner conductors. So any electric fields that get through the shield, or any magnetically induced interference, impinges equally on both wires and is ignored by the receiving device.

Cables carrying digital signals need to pass frequencies higher than 20kHz because sample rates are at least double that of the audio bandwidth. Further, cable capacitance can round the corners of the square waves that represent digital audio, affecting embedded clocking information. But generally, digital audio data either transfers intact or it doesn’t get through at all; or you’ll notice obvious clicks and dropouts. The notion that USB or RCA cables passing digital audio can lose subtle clarity or imaging detail encoded within the data is fiction.

Finally, the belief that AC power cables affect audio quality is the easiest myth to dispel. Like speaker wire, as long as the gauge is adequate for the length and required amount of current, a power cord simply can’t affect sound quality.

So the next time a sales drone tries to up-sell you a more expensive cable, just smile and say you know better.

Ethan Winer has been an audio engineer and musician for more than 45 years. His Focal Press book The Audio Expert is a reference text for several US university recording courses.