Many pro engineers still turn to expensive hardware for the best algorithmic reverbs. Can 2CAudio's Aether plug‑in tear them away from their racks? 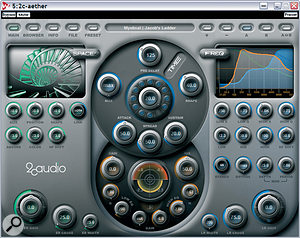 Every musician seems to have a favourite reverb, whether it be hardware or software, algorithmic, convolution, plate or spring.The clarity and realism of convolution reverbs often seems to appeal to those working in acoustic, folk, jazz and classical realms, while those working in rock and electronic music often favour the richness and flexibility of algorithmic reverbs.

Entering this extremely competitive arena is 2CAudio's Aether, an algorithmic reverb plug‑in that its developers believe to be "the best sounding reverb on the market. Period.” Bold claims indeed! Its Auto Randomising design claims to simulate the chaotic processes found in nature, it offers a True Stereo mode, and if you like detailed programming, there are over 75 tweakable parameters.

The futuristic Aether interface is a real opinion‑divider. Due to the large number of controls on offer in the main display (around 60 in total), the default GUI is huge and will barely fit on a 1024 x 768‑pixel screen, but fortunately you can switch to a rather smaller version that's more in line with its competitors in terms of screen real-estate. Also, while the sculpted 'metalwork' of the panel is pleasing, some may find the three groups of differently coloured knobs and associated graphic displays rather garish.

Aether's main interface is divided into three main areas. The left‑hand side is colour‑coded green and covers early reflections. You can choose from 33 'Spaces' ranging from phone booths to amphitheatres: these, by default, alter the values of a clutch of the early‑reflection front‑panel parameter values and another clutch of late‑reflection parameters. There's also a helpful graphic representation of the environment being modelled, although these images aren't always obvious.

Other rotary knobs in this section include the self‑explanatory Size and Absorb, while Color and HF Soft provide plenty of tonal variation to mimic room coverings and soft furnishings, and Shape alters the complexity of the reflections, perhaps mimicking the shift from an empty room to one containing lots of furniture and other objects. The Position control smoothly alters the source and virtual mic positions, although in this version you can't choose a specific stage position, as you can (for instance) in Altiverb. However, it's possible to use one instance of Aether for late reflections only (with the ER section bypassed), and then several further instances using only the ER section, each with different Position settings. Despite the huge number of controls on show, changing the current Space also, apparently, tweaks another 75 hidden parameters associated with the reverb algorithms.

Aether offers a total of 33 Spaces in its early reflection section, together covering a huge range of different environments.

The top‑middle and right side of the interface is devoted to late reflections, with blue knobs. Reverb time, Size, Diffuse and Pre‑delay are fairly obvious; a slower Attack mimics the gradual build‑up of reflections found in larger buildings, and an increased Sustain adds more energy to the reverb tail, so you can achieve a bigger sense of space around your sound without muddying the mix or resorting to gated reverb.

The manual descriptions for Shape and Spread are confusing but, like its ER counterpart, Shape seems to alter the complexity of the later reflections, while Spread controls their build‑up, acting like a hold area in the reflection envelope (although in practice its action varies significantly, depending on the settings of other controls).

Aether goes beyond many other algorithmic reverbs in offering three bands of damping with variable crossover frequencies and Q factor, but I found this section quite confusing, partly because the seven controls have anonymous labels such as Low, Low X and Low Q, and also because the central ratio positions are labelled 50 rather than 100 percent.

The bottom‑middle set of Input and Mix controls (this time in orange) includes a two‑band input filter offering low and high shelving filters, again with variable cutoff and Q. Late reflections can be computed as mono input to stereo output or, for more realistic treatment of stereo inputs, stereo input to stereo output (with a 30 percent hike in CPU overhead). Both early and late reflection sections also offer Cross and Width controls, letting you alter the input signal panning and output width for a variety of treatments. Reducing reverb width can be a great way to prevent the reverb dominating a busy mix, for instance.

The main interface will, no doubt, prove overwhelming to many, so fortunately the casual dabbler can switch to the Browser view for a text‑based list of presets arranged across multiple columns. Aether is shipped with several hundred presets sorted into categories covering short Ambiences, Small and Narrow spaces, Natural environments such as mountains, forests and caves, Urban ones such as buildings and sports arenas, and treatments specifically intended for Drums, Instruments, Vocals and larger musical ensembles.

Together, these presets cover a huge amount of sonic ground, and from the word go, I was impressed by their smoothness and richness. From short ambiences to cavernous arenas, all proved to be very usable in the context of a mix, adding a natural sense of space that enhanced the original sounds without sounding 'pasted on'. I was also taken with the vast Mystical spaces and unusual Special effects: Aether excels when its algorithms are pushed to extremes to create long granular clusters of early reflections, decaying echos, or unusual metallic and chordal tails.

To place Aether into some sort of context I initially lined it up against four other algorithmic reverb plug‑ins that are in my collection, and the results proved to be largely in line with their CPU overheads: the richer the sound, the more processing power was required. Waves Trueverb and Rverb, and Wave Arts' Masterverb 5 were all capable of smooth‑sounding, non‑metallic tails, but sounded noticeably thin and flat in comparison with Aether. The Arts Acoustic reverb (a previous favourite of mine) was more versatile than these, and had a richer and more lively sound at the expense of more CPU load, but Aether was easily the best of the bunch.

So I decided to up my game by wheeling in the Bricasti M7 hardware reverb, subject of much praise for its dense and detailed sound. After spending some hours attempting to match various Bricasti presets using Aether's controls, I got significantly closer than I could with any other plug‑in reverb, but eventually the Bricasti won out with its greater sense of realism, focus, and the beautiful movement within its reverb tails that managed to enhance so many instrumental sounds. I was also deeply impressed that it managed to offer so much versatility using just 15 main reverb parameters, compared with the many dozens in Aether.

Interestingly, I also got closer to the sound of the Bricasti using Aether than I did with impulse responses of the same Bricasti played through Altiverb, proving that the moving modulation of the algorithmic tail is a vital part of the overall Bricasti signature and demonstrating the effectiveness of Aether's auto‑randomising algorithm and modulation section in making things sound more 'alive'. 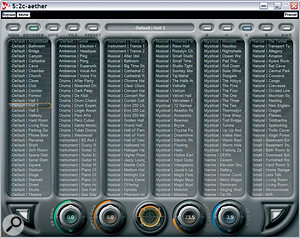 For those who want an easier life, Aether's Browser page lets you concentrate on choosing from the many and varied presets on offer.

Overall, I was deeply impressed by Aether's rich and versatile sound, and it's the best‑sounding native plug‑in reverb I've heard to date, by a long chalk. However, I do have a few reservations about the graphic interface. For instance, it would help if the units for each control (percent, dB, Hz, milliseconds or seconds) were shown, as it's difficult to take in the current values of 40 rotary knobs when all you see is a swathe of numbers. Also, the frequency display graph in the late‑reflection area confusingly crams in four different‑coloured curves relating to the settings of controls all over the interface: late‑reflection damping, input EQ and separate high-shelving filters for the early and late reflections.

However, Aether is skinnable, so there will no doubt be third‑party offerings in due course, while 2CAudio themselves promise a more conservative 2D interface when their version 1.1 update is released "this Summer”. Personal taste aside, this is a damn fine reverb, and 2CAudio should be very proud of their first baby.

Although there are excellent algorithmic reverbs from TC Electronic and Universal Audio that run on DSP cards, if you want a native algorithmic reverb plug‑in, little in my experience comes close to Aether. The Sonnox Oxford Reverb is very well regarded, as is Overloud's Breverb, and for those with smaller budgets the Arts Acoustic reverb is good. However, Aether is the best native plug‑in algorithmic reverb I've heard to date.

Aether requires a Windows VST host application running under Windows XP or Vista, or a Mac VST or Audio Units host on OSX 5.n or higher, running an Intel‑based CPU (PPC hardware is currently not supported).

Most Aether presets consumed around 11 percent of my 2.4GHz dual‑core processor, but with a few of the special‑effect presets, the reading jumped as high as 50 percent.

A Spin In The Tail

One of the reasons why algorithmic reverbs such as those from Bricasti, Lexicon and TC Electronic sound less clinical than convolution designs is the provision of some sort of reverb parameter modulation. You can imagine this as cyclically moving the walls backwards and forwards by a small amount to avoid any build‑up of ringing and metallic overtones, resulting in a smoother frequency response. When used in larger amounts it can add extra richness, movement, or shimmering effects.

Aether also offers a modulation section with Depth and Period controls, which proved very effective when mimicking these expensive hardware reverbs. Its Period control ranges from 0.25 to 500 seconds, giving a longest cycle time of over eight minutes, but even with the modulation depth set to zero there's still apparently some behind‑the‑scenes modulation to avoid static build‑up.

2CAudio's Aether is the best‑sounding algorithmic native plug‑in reverb I've ever heard, and it deserves to do really well, especially once its interface is tweaked to suit the pro audio market better.