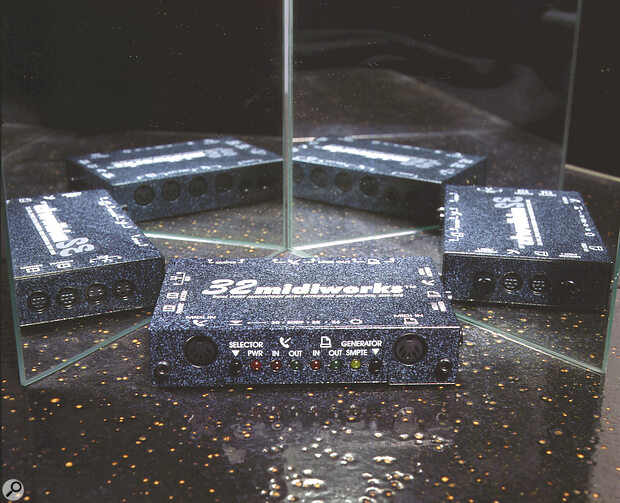 If you need to add a MIDI interface to a Mac, it has to be external — there is no Mac equivalent of a Soundblaster 16 with on‑board MIDI port. MIDI interfaces invariably connect to Macs via either the printer or modem ports. The 32midiworks model under review is a 'standard' Mac MIDI interface, which means it can be used with most music software (running on System 7 or above) without the need to install any drivers. It includes both modem and printer connectors, so that two 16 channel MIDI ports (32 MIDI channels) are available, and switched thru connectors are used so that the Mac may also be used to drive a modem or printer without the need to unplug cables. When the switches are set to their Printer or Modem positions, the MIDI inputs are passed directly to the outputs, which provides a simple means to play live MIDI parts when the sequencer is switched off. Each port has one MIDI In and two MIDI Outs. Power, SMPTE Stripe and MIDI In/Out activity LEDs for both ports provide visual feedback to show what the unit is doing.

The 32midiworks has no power supply of its own, instead drawing its power directly from the Mac's ADB buss. This works by connecting the 32midiworks in series with the Mac keyboard via two ADB sockets on the box, for which the necessary cables are provided including those needed to hook up to the modem and printer sockets. In addition to its basic MIDI interface function, the 32midiworks can generate SMPTE in 30‑, 30 drop frame, 25‑ and 24‑frame formats. Code can only be generated from time zero, but another useful trick is the box's ability to covert incoming SMPTE into MTC, enabling it to double as a tape sync unit.

Physically, the 32midiworks is a simple steel box painted in a glossy grey spatter finish with sockets on all four edges. The SMPTE In and Out connections are on jacks, there are conventional MIDI In and Out DIN connectors, and there are further sockets for connection to the computer and to a modem and printer if you have them.

I'd spent most of the day struggling with some rather intransigent software that seemed determined to thwart all my efforts to review it, so it came as a welcome relief when I unpacked the 32midiworks, plugged it in, booted up Logic and it worked. The SMPTE striping starts and stops at the push of a button, and if SMPTE is fed back into the unit, the computer is fed with MTC. And that's it. It says midiworks on the tin and it's true, MIDI works! Paul White