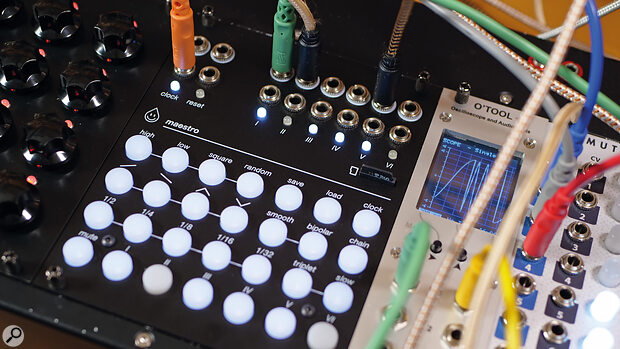 LFOs provide most of the movement and character of Eurorack music making and yet are rarely very interesting in themselves. For an LFO module to stand out from the crowd it has to have a super power and Maestro has a few.

Maestro is a six‑channel clockable and programmable LFO with an unusual button‑based front panel. Acid Rain have put the focus on tempo‑sync and time divisions, which makes for a very structured and musical experience. For each channel you can chose the waveshape from ramp, triangle, square or random and a time division down to 1/32. A handy ‘Smooth’ button moulds the triangle into a sine wave and the stepped random wave into a squiggly line while a ‘Slow’ button inverts the time divisions into multiplications for much longer cycles. A ‘Triplets’ button adds some nicely offset rhythms.

The button interface makes short work of everything. Hold the chosen channel button and tap away to instantly change the waveform or speed. Or do it the other way around by holding a waveform button and tapping channels to send it to all of them. There’s a playfulness in swapping modulations from a slow ramp up to a fast sine wave or taking a pleasing wobble to a whole bunch of randomness at the tap of a button. Modulation has never been so fluid and interesting.

Then we have the superpowers. Each channel is mutable which, initially, doesn’t sound particularly exciting but the effect of muting or engaging modulation as part of a track can be completely magical. I can already do this sort of thing by physically removing cables between an LFO and the destination, but Maestro gives me that control much more elegantly and over six channels at once. I’d usually find variation in my rack in the muting and unmuting of audio channels whereas now I can find a whole new level of it in the muting and unmuting of modulation. It’s there in the sudden appearance of pulse‑width wobblings, filter engagement, gradually ramped parameters and the equally sudden removal of these things.

The second superpower is the ability to chain waveforms to generate a string of varying modulations in form and time. Move from the simple slow cycles of a sine wave followed by a fast wobble that leads to a long ramp up that pulses in time to your music. You can drop in cycles of highs or lows, triplets and blurs all crafting the character of your track in numerous ways. You can save your chain to the included SD card and load up different patterns with a button combination for further variations to your chains of variation. Maestro is master of modulation, an audere of automation.

One final feature is the trigger input for each channel which fires a cycle of the chosen waveform making for a useful envelope generator, although it can also fire an entire chain which raises all sorts of possibilities.

The button interface is quick to navigate but you tend to need two hands or at least two or three fingers. There’s no latching so you have to hold the channel or the thing you want to implement. Probably the one thing it lacks is attenuation. There is a ‘Bipolar’ button to swap between 0 to +5 V and ‑5 to +5 V. Perhaps that button could be programmed to split the range into further divisions? But otherwise, this is the most time I’ve ever spent playing with an LFO and it’s quickly becoming part of my creative process.