Acoustica's inexpensive and easy-to-use sequencer continues to impress with the addition of MIDI tracks and VST Instrument support. 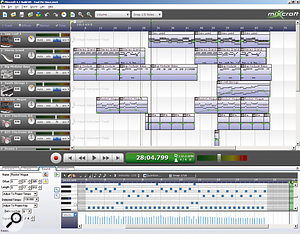 Perhaps the most important new feature in Mixcraft 4 is MIDI recording and editing, with a conventional piano-roll editor appearing in the lower half of the window when MIDI parts are double-clicked.The last time we encountered Acoustica's Mixcraft was back in the November 2007 issue (www.soundonsound.com/sos/nov07/articles/mixcraft.htm), when the program stood at version 3.1. For about 30 quid, it offered easy-to-use multitrack audio recording and mixing, CD burning, and Acid-style looping (with a royalty-free loop library included), and support for VST and DirectX effects. This was all wrapped up in a clear and simple user interface, visually reminiscent of Apple's GarageBand.

Acoustica are clearly not content to let the grass grow under their feet. Mixcraft development has continued apace, with new features added by the fistful, and here we are barely six months later confronted by Mixcraft version 4 (point 1, in fact).

This Is Where We Came In

Mixcraft 4 can be purchased on-line from www.acoustica.com for $64.95, which, unless the dollar recovers dramatically between my writing this and it going to print, works out at about £32.50 (UK distributors Et Cetera offer a boxed copy on CD-ROM for £49.99). If you opt to buy the download, you'll need a reasonably quick Internet connection (ie. not dial–up), since there are a couple of hundred megabytes of stuff to be fetched for a standard installation.

Windows is the supported operating system, in 98, ME, NT, XP and Vista flavours. The quoted minimum system requirements have crept up a little since version 3.0, I think, but are still quite reasonable: 512MB RAM (1 gigabyte recommended), and a 1GHz CPU (dual- or quad-core recommended). Acoustica provide a seven–day free trial, after which a registration code must be purchased if you want to go on using the software. The registration code provided with my review copy appeared to be a dud, but a replacement was helpfully provided via email within the hour.

Rather than undertaking a radical overhaul of the application's design (which would have been unnecessary), Acoustica have concentrated on adding new features to the existing set, bringing the program broadly into line with other DAW applications. So where version 3 provided audio functionality only, version 4 adds MIDI sequencing. Where version 3 supported VST and Direct X effects, version 4 adds VST Instrument support; Direct X instruments still appear to be unsupported, although I can't imagine this will be a deal-breaker for many.

The user interface is largely unchanged, retaining strong hints of Acid and Garageband (this is an observation, not a criticism). The new features, where they are implemented, are streamlined into the design very effectively. Existing Mixcraft users will feel comfortably 'at home', while new users should find the program just as approachable as it was before.

A variety of small enhancements and improvements have been made since version 3. For instance, looped playback is now properly implemented (whereas before there'd be a brief pause between the end and the beginning of the looped selection, looped playback is now continuous). Each track now has its own FX button, allowing effects plug-ins to be assigned to tracks 'at a glance', without switching to the Track tab in the Mixcraft window's lower pane.

Mixcraft has also been updated to ensure compatibility with Windows Vista, including support for Microsoft's new WaveRT audio system. I have to confess that I haven't installed Vista, and so have no practical experience of WaveRT. In any case, Mixcraft still supports MME and ASIO devices, so XP users' audio hardware will continue to work as before. 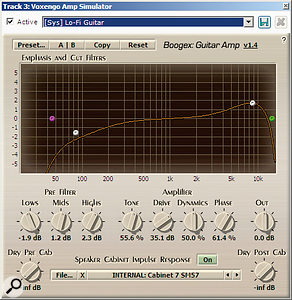 Voxengo's Boogex guitar-amp simulator is a welcome addition.Several new plug-ins are included with the Mixcraft 4 bundle, some of which are also available as freeware on the web. In addition to a selection of VST Instrument plug-ins described in the 'Instruments Included' box, a simple, easy-to-use guitar–amp simulator has been added to the bundle, in the form of Voxengo's Boogex plug-in.

The most significant new feature, however, is MIDI sequencing. A corresponding new track type has been added, referred to as 'Virtual Instrument Tracks', although these can also be set to output to a physical MIDI interface, in order to drive an external hardware synth in the old-fashioned way. MIDI instrument tracks appear alongside audio or loop tracks in the normal Mixcraft arrangement pane, and MIDI parts are handled and edited in much the same way. MIDI tracks and audio tracks may be recorded simultaneously, if need be.

Double-clicking a MIDI part opens a familiar-looking piano-roll editor in the Mixcraft window's tabbed lower pane — the same place the waveform appears when you're editing an audio part. The piano-roll editor works as anyone who's ever used a computer-based MIDI sequencer would expect. Recorded MIDI parts can be edited and new patterns can be programmed in 'step time', by entering notes of different pitches and lengths with the mouse. A strip along the bottom of the piano roll displays MIDI note velocities by default, but can be used to view and edit other forms of MIDI data, including Program Change messages, channel pressure, pitch-bend, mod wheel, breath controller and various other Continuous Controllers. The editor is easy to use and responsive, and makes working with MIDI parts as simple and immediate as working with audio loops. 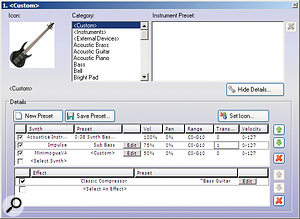 Multiple instruments and effects can be 'stacked' on a single track.The obvious companion to MIDI sequencing is virtual instrument support, and this is provided for VST Instrument plug-ins. One nice feature of Mixcraft's virtual instrument implementation is the ease with which several different instruments can be layered up together on a single track. Each MIDI track has a small keyboard icon. When clicked, this opens a dialogue box where you can choose from the various installed VST Instruments, or nominate a physical MIDI output, assuming your computer has a MIDI interface installed. The selected instrument and preset name appear in a list, where settings can also be made (by double-clicking and typing new values) for pan, volume, keyboard range, velocity range and transposition. When you've added one instrument, you can add another, and another, and so on. There doesn't appear to be a fixed upper limit for the number of instruments (although system resources will impose a limit in practice).

Effects can be added in the same way, and when you've built up a suitably massive–sounding conglomeration, you can save it as a preset, so that the whole combination can be recalled with a couple of mouse clicks. This makes it easy to, for example, create a huge, layered bass sound, or a harmonised lead line. You could also assign different instruments to different keyboard ranges, or even velocity ranges, or create elaborate multi-effects patches.

A good selection of instrument track presets marrying different instruments and effects is provided, and these can be browsed by category ('Acoustic Piano', 'Distorted Guitar', 'Hits and Stabs', and so on). Newcomers will find good-sounding results within reassuringly easy reach.

It would be an exaggeration to say that Mixcraft offers all the same features as the industry-standard DAW packages — score editing, video import and support for hardware control surfaces are still lacking, to pick a few at random — but now that MIDI and virtual instrument support is in place, it certainly offers most of the most commonly used ones, and for a fraction of the price. If you're a Windows user and aren't sure that you need all the whistles and bells provided by the more heavyweight applications, I'd certainly recommend downloading Mixcraft and putting it to the test. It's easy to learn and use, it works well, and the price (especially for the download version) is competitive, to say the least! 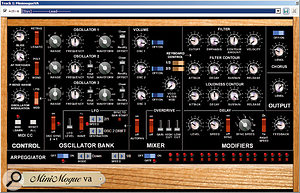 Included in the Mixcraft bundle are four handy VST Instrument plug-ins. The VB3 organ is a specially licensed, cut-down version of a popular virtual tonewheel organ available from www.soundfonts.it for 49 Euros. The Mixcraft version is not quite as editable as its larger sibling, but it's easy to use and sounds good, especially the rotary speaker effect.

The MiniMogue VA virtual analogue synth also has a life outside of Mixcraft, and is available as a free download from www.home.no/gunnare. As such, it perhaps doesn't count as a selling point for Mixcraft, but it's a useful synth nonetheless, and capable of some nice sounds. The Impulse polysynth is another internet freebie, available, along with a number of other plug-ins, from www.bojo-software.com. Again, perhaps not strictly a selling point for Mixcraft, but still a useful addition, especially for newcomers who may not be comfortable downloading and installing plug-ins themselves.

Finally there's the Acoustica Instruments instrument, which is a no-frills sample-playback or Soundfont-type plug-in, offering a complete General MIDI sound set. The quality of the sounds is a bit varied: some are very good, others a bit less inspiring, but overall it's quite usable.