ADAM have shaved the price but not the quality for these active nearfields. Do they offer enough to help them stand out from the crowd? 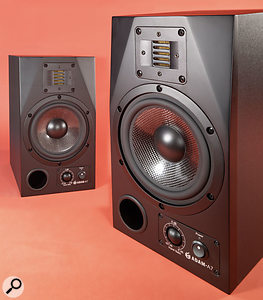 ADAM's A7 is probably the nearest thing to a budget active studio monitor that the company has in its portfolio. However, although it may be on the budget side, the A7 still incorporates all the design principles that make ADAM monitors so distinctive. Created as a nearfield monitor, the A7 teams a 6.5-inch woofer with one of ADAM's signature folded-ribbon ART tweeters (you can read more about this technology in our review of the ADAM ANF10 monitors, which appeared in SOS November 2004). Unlike other ADAM monitors I've looked at recently, the A7's woofer uses a woven Rohacell/carbon-fibre cone structure said to combine high rigidity, good self-damping and low mass, which are the three main attributes of any effective speaker cone. The main driver is recessed flush with the front baffle and has a soft roll-rubber surround, and both magnetically-shielded drivers are powered by independent 50W RMS/80W peak amplifiers with a crossover frequency of 2.2kHz. Although the cabinets are physically compact, at 180 x 330 x 280mm, and weigh just 8kg each, the combination of a relatively small woofer with a ported enclosure enables the A7 to cover an ambitious 46Hz to 35kHz frequency range (-3dB). A maximum SPL of 105dB at 1m (Peak 116dB) is quoted (per pair of speakers) and the THD figure is better than one percent. The manual also quotes a two-year warranty period, which is well worth having.

Both the power switch and power LED, plus the oddly dome-shaped level control, are located on the front panel to the right of the port, while the the rear panel houses controls for the tweeter level and high- and low-frequency shelving filters, at 6kHz and 150Hz respectively, for room-placement compensation. The tweeter level is adjustable by +/- 4dB, while the shelving filters have a +/-6dB range. For connecting to an audio source, both balanced (XLR) and unbalanced (RCA phono) connectors are fitted, but there are no quarter-inch jacks. As with ADAM's other monitors, the cabinet is very sturdy, built from thick MDF finished in black paintwork, with chamfered sections to the upper edges of the baffle, to reduce diffraction from the cabinet corners and also to give a distinctive appearance. If Darth Vader needed a nearfield monitor, he'd probably choose ADAM based on the styling alone!

ADAM's folded tweeter design gives their monitors a very open, clear-sounding top end that works particularly well for picking out detail within a mix, but how does that match up with the new 6.5-inch main driver used in the A7s? The answer is 'pretty well', as there's a sensible amount of low end and, more importantly, a clear and smooth mid-range. 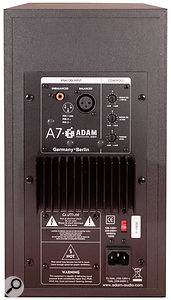 With all the rear-panel controls set flat, the high end is typical of what I consider to be the ADAM sound, in that it's slightly overstated but not oppressively so. It certainly helps you to dissect your mixes, and stereo imaging is particularly good. These are nearfield speakers but there's no shortage of level, unless you regularly monitor at insane volumes. While you're not going to get monstrous bass depth from speakers of this size, the designers seem to have resisted the temptation to over-peak the cabinet tuning to give an impression of depth around the kick-drum frequency, at the expense of accuracy and smoothness. This is definitely a good thing. In the smaller rooms that most of us have to work in, the amount of 'real' bass provided by these monitors gives a good impression of the mix, while not causing the room modes to misbehave too badly.

When I review speakers and microphones, I often feel I have a duty to point out that there is a lot of choice in most price ranges and that some of the competitors are also extremely good. Very often the final choice of monitor comes down to what character of sound you prefer to work with, and how well the speakers perform in your particular room. If you can test the ADAM A7s alongside other speakers on your shortlist you're more likely to make the correct decision, but don't fall into the trap of assuming that the loudest or brightest speaker is best, as that's often not the case. What sounds lively and exciting in the shop can prove to be fatiguing after prolonged use in the studio, so what you're looking for is a speaker that presents your music impartially, not one that hypes it up. In the main, the A7s do this very well.

While we'd all like to be recommended a single pair of 'accurate' monitors, my experience is that there's no such thing — speakers offer interpretations of accuracy but that's not the same thing as accuracy itself. Consequently, I'll end by saying that the A7s are capable of good mixing results that translate well to other speaker systems.

Check out models from Event, Fostex, Alesis, M-Audio, Dynaudio, Genelec, Mackie and KRK, as these ranges all include competing designs in a similar price bracket. If I were to narrow the choice further, based on price and tonal character, I'd suggest looking at the Genelec 8030As and Dynaudio BM5As first, but don't dismiss the others.

Although they are less costly than the rest of the ADAM studio range, these speakers are built to the same quality standards and perform well. They're not without competition, but they give a very good account of themselves within their price range.