It shares some technology with the respected A7X, but the largest in Adam's F-series of monitors is much more affordable.

The Adam F7 active nearfield monitor is the bigger brother of the company's F5, which we reviewed back in SOS March 2013. The F7 can be thought of as a lower-cost version of Adam's popular A7X, and although the F7's cabinet and woofer are built overseas, the all-important folded-ribbon tweeter is still made at Adam's factory in Berlin. These speakers are priced to compete with popular models from the likes of KRK and Mackie. 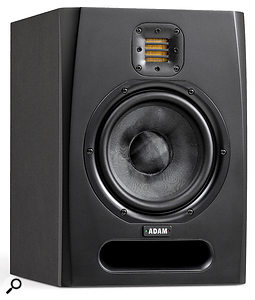 The F7's cabinets measure 321 x 225 x 266mm, so they're a similar size to the A7Xs, other than being a little bit wider. They have a tidy, unassuming, black-foil finish, and a slot port is evident at the bottom of the front panel. This features a moulded insert, to smooth out the air flow, while the baffle's edges are chamfered to reduce edge diffraction. As the drivers are both mounted centrally, the left and right speakers are identical.

The seven-inch carbon and paper cone woofer is driven by a 37mm voice coil, and was apparently designed specifically to pair with the AMT (Advanced Motion Technology) tweeter. The AMT used in this model is, in fact, called the X-ART, which is the latest refinement of the design and is the same type of tweeter as that used in the A7X. The crossover frequency between the woofer and tweeter is set at 2.6kHz.

The rear panel houses a control for volume, plus two EQ trim pots. These both have a ±6dB range and adjust frequencies above 5kHz (for the highs) and below 300Hz (lows). There's also a toggle switch that engages or bypasses an 80Hz high-pass filter. Overall, the speakers are capable of a maximum SPL of greater than 109dB at one metre, and their frequency range is quoted as 44Hz to 50kHz.

Each speaker is powered by a pair of conventional Class-AB amplifiers, where the woofer can draw a maximum peak power of 85W and the tweeter 55W — although the slightly more meaningful RMS rating is around one third less than this (60W and 40W, respectively). The inputs come in on a choice of balanced XLR/jack 'combi' sockets or unbalanced RCA phono, while the mains inlet is a standard IEC type. 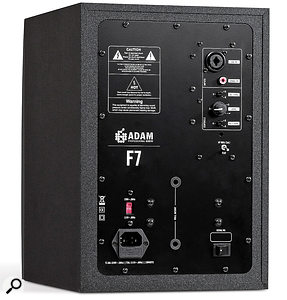 Inputs are available on jack, XLR or RCA phono sockets, while the rear-panel controls comprise an input-level knob, and trim pots for adjusting the high- and low-frequency response.As conventional amplifiers are heavier than modern, light, Class-D designs, these boxes weigh in at a solid 9kg each — although traditional Class-A and Class-AB amplifiers have a good reputation for reliability, and are also easier to fix if there is a problem. Adam do, however, include a two-year warranty.

I listened to the F7s alongside a pair of A7Xs, and they definitely have a similar 'family' sound. They are also both capable of playing as loud as could sensibly be required! With the rear-panel controls set flat, the mid-range of the F7s is slightly softer sounding, although turning up the tweeter level a whisker brings the overall sound closer to that of the A7Xs. The lows on the A7Xs seem a hint tighter too, but there's actually very little difference between them, and both produce a similar feeling of subjective bass depth, which would be more than adequate, without the need to add a sub, in a typical home studio.

In broad terms, the F7 has a smooth and well-balanced low end and mid-range, while the highs exhibit a lot of detail and follow transients well, because of the extended frequency range of the tweeter. As you'd expect, it's the high end that best matches the A7X sound, since both use the same folded-tweeter technology.

All small ported speakers suffer from some degree of bass 'overhang', because the port is part of a mechanical tuned circuit designed to prop up the low-end frequency response of the cabinet. Despite this, the F7s still manage to deliver enough bass definition to make reliable mixes, so it would seem that Adam's engineers have managed this unavoidable compromise effectively.

When it comes to stereo imaging, the F7s again score well, with a solid phantom centre image, a believable sense of left/right width and a useful degree of front-to-back perspective. Inevitably, they are less three-dimensional sounding than 'money no object' monitors, but they do pretty well and I'd be more than happy to mix on them.

Ultimately, if you can afford to buy the A7Xs, I'd say they're still worth the extra, because of their slightly tighter sound and enhanced sense of mid-range focus, but within their price range the F7s stand up very strongly indeed.

The F7s come up against the likes of KRK, Mackie and M-Audio. Though each has its own sonic character, I think the Adam F7s compare well and do exactly as intended, which is to offer a cheaper alternative to the A7X without sacrificing too much in the way of performance.

These speakers sit in a price sector that appeals to small studio operators and deliver good performance within that price range.