The Adam Hall Cabinet Clamp is designed to save you space on stage by eliminating the need for a mic stand when miking up a guitar combo or cabinet. This isn't the first product of its type, however — that honour goes to the somewhat pricier Audix Cab Grabber, which we reviewed in SOS December 2009 (http://sosm.ag/dec09-cab-grabber). Like the Audix, this version is comprised of two tubes, one of which slides into the other, with a rubber bracket on each. Inside the tube arrangement is a spring, which maintains tension when the brackets are fitted over a guitar amp or cab. The clamp can accommodate cabinets or combos between around 200 and 380 mm in depth, which should work with most normal-sized guitar cabs, but may prevent it being used with chunkier bass amps (although I did manage to successfully fit it to the side of my Hammond T202). 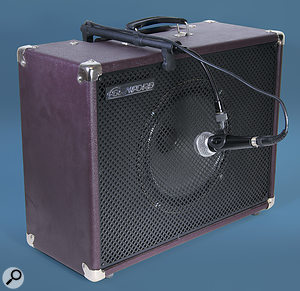 So far, then, little difference between it and the Audix — even the range of cabinets it can accommodate is very similar — but with one major exception. The part of the Cabinet Clamp to which a mic is fitted is a gooseneck, rather than the right-angled metal tube that the Audix uses. In theory this should make the mic position easier to adjust in the Adam Hall one... but the gooseneck is, unfortunately, a little prone to drooping with heavier mics. Lighter mics, like my Heil PR30, seemed to work OK, but anything much heavier would cause the gooseneck to sag, especially if I had the clamp fitted around the side of an amp, rather than over the top of it. I did, however, manage to get significantly heavier side-address mics to play ball with the clamp fitted over the top of an amp. With both a heavy active ribbon and an LDC it was fairly easy to get the mic dangling upside-down in a reasonable position with the gooseneck at 'maximum droop' so I knew the mic wouldn't be going anywhere in a hurry.

In a studio context, the inherent sag with heavier mics would be a pretty serious problem, but since the flexibility of mic positioning when using any such clamp is compromised to begin with, it's clear that the Cabinet Clamp's natural home is on stage, where an inch here or there isn't much of a problem, and where the space saved by not needing a mic stand makes the trade-off worthwhile.