AKG's form for making quality cans for mixing is well known. How do these new models compare with their previous flagship design?

AKG's K702s have long been a popular choice among those seeking a reference-quality pair of open-backed headphones for mixing at a price that won't break the bank. A limited Anniversary Edition was released last year to mark the first 50 years of AKG's existence, and the K702s have now been joined in the company's range by two new models. 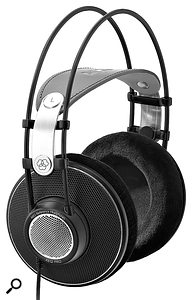 Price-wise, the new K612 and K712 sit either side of their older siblings, and both are obviously close variants of the same design, with the same instantly identifiable circular earpieces and chunky wire frames. All three share the same grandiose cardboard packaging; the K712s also include a velour bag, but there is no padded carrying case like that you get with, say, the Shure SRH1840s. Like the K702s, the K712s have a detachable cable that attaches to the left earcup by a mini-XLR connector. The K712s include both curly and straight cables, while the cheaper K612s have a fixed, straight cable.

The circumaural earcups in all three models are large enough to enclose the ear comfortably, and a 'self-adjusting' leather band that is separate from the frame itself supports their weight across the top of the head. My initial impression was that the K712s were slightly too large for my own head, being kept in place more by friction from the earcups than by pressure from the headband. However, once I got used to them, I found them all lightweight and comfortable, and not at all prone to slipping.

The design of the earcups, with their thick foam surrounds, means that the drivers seem to be positioned slightly further away from the ear than in many phones. This perhaps contributes towards the distinctive 'family sound' that is carried over from the K702 into the newer models. All three are very open, with a good deal of leakage both in and out, all are on the bright side of neutral, and all three present a very wide stereo panorama that slightly exaggerates hard-panned sounds compared with those in the centre of the mix.

To my ears, the K612s sound and feel very similar indeed to the existing K702s, which is an impressive achievement considering that the former are much more affordable. There are not many headphones at this price that I'd be happy to use for crucial mixing and editing decisions, so it's clear that these represent excellent value for money. Whereas the K712s are made in Austria, the K612s are manufactured in the Far East, and this seems to have allowed AKG to deliver a very high-quality product for the price. 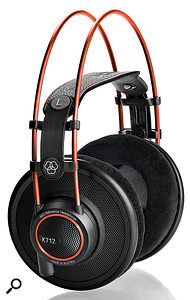 Worthy though the K612s are, however, they do exhibit some shortcomings when compared with the new flagship K712s, with their "revolutionary flat-wire voice coil” technology. As I've already mentioned, the AKG family sound has a tendency to brightness, and in the K612 and K702, this manifests itself as a brash and occasionally gritty emphasis on the upper mids. By contrast, the K712s are much smoother through this frequency region and, as a consequence, are more revealing of detail in the mix. It is, for instance, significantly easier to get a handle on the character of different reverb patches through the K712s, and you are less likely to be distracted by tape hiss. The K712s are also a little more sensitive than the K612s, making it easier to drive them loud.

Perhaps the biggest improvement, though, lies in the way the K712s present bass instruments. The packaging boasts of a "3dB improved low-end performance”. What is meant by this isn't clear, but what is obvious is that these headphones are really adept at putting across the bottom end of a mix. Low-frequency extension is impressive — the packaging claims that the bandwidth extends to 10Hz, though the tolerance isn't stated — but it's the way in which bass guitars, synths and kick drums are articulated that really grabs the ear. The sound is muscular and fast yet balanced, making it easy to distinguish different low-frequency mix elements.

Overall, the K712s are a noticeable step up both from the K612 and from the well established K702, and if you're in the market for a serious pair of open-backed headphones for mixing, they should certainly be auditioned alongside the likes of Shure's SRH1840s and Sennheiser's HD650s.