Making Music On The Move By Bill Lacey & Paul White

Modular is a new app that recreates the experience of using an analogue-style modular synthesizer on your iPhone or iPad. The app consists of 25 modules to build your sounds with, 11 of which are only available as in-app purchases. Some 90 presets are included, and these serve as both starting points and learning tools. Patches can be randomised, saved, emailed and exported, while sounds can be recorded and sent to Soundcloud and iTunes or copied for use in other apps via Audio Copy. 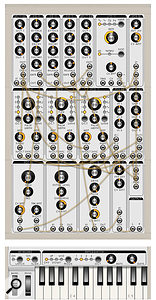 Modular: the adjustable opacity of patch cables makes it easy to see what's going on underneath.

Many of the modules that come with the app are expected subtractive synthesis building blocks such as VCO, VCF, VCA, LFO, EG, Ring Mod, Sample & Hold, Delay, Inverter and Signal Mixer. Some of the more esoteric modules included free are a Signal Splitter (which provides three separate outputs) and a Boolean module that applies Boolean mathematical functions to a signal, often with interesting results.

The paid modules include advanced versions of the Noise Generator, VCO with Pulse Width and Frequency Modulation, two VCFs (one two-pole, the other four-pole), an LFO that can be sync'ed to tempo, an Envelope Generator with ADSR controls, XFade (which crossfades two signals), Slew Limiter, Delay with Mix and CV Amounts, a Ring and Amplitude Modulation combo and, finally, a Distortion module with Drive, Tone and Mix controls.

The MIDI control is impressive: Modular can be controlled via external or Virtual MIDI, and any knob can be mapped to a CC message ­— a boon for MIDI Designer Pro users. In fact, MIDI Designer Pro makes it much easier to use Modular in a live performance setting as you can control the size and placement of controls you specifically want to manipulate in that environment. A useful help system is supplied and the manual even recommends SOS's own Synth Secrets series by Gordon Reid for further study. 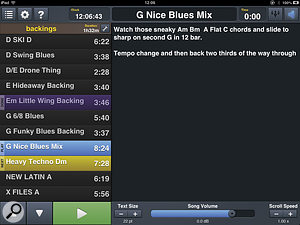 Simplicity and clarity are the order of the day in the Stage Traxx GUI.In use it's very easy to drag and drop modules, which are tucked away in a sidebar. Pressing a finger on any output will instantly hide all patch cords and highlight all available destinations in yellow. This system makes it both easy to use and lures you into experimentation, which, after all, is one of the joys of digging into modular synthesis in the first place.

The interface offers both portrait and landscape orientation, and on the iPad Retina Display it looks stunningly real. The cable colour can be changed as well as the opacity; a crucial feature for the smaller iPhone display, as it can sometimes be very difficult to see where things are plugged in when many patch cords are employed. The keyboard sports an arpeggiator and latch control, which is essential if you're working without an external MIDI controller. Despite all this, it can be too easy to unintentionally move a knob or cable when you're trying to swipe your way around the interface, especially on the smaller screen the iPhone offers. There's a lock button, but it only prevents the cables from being modified; knobs are always live. An undo button to help when things go adrift would be welcome.

On the whole, Modular is a great app for experienced programmers and those aspiring to learn how to program from scratch. It's as clean sounding as it looks; it lacks the grit of analogue but doesn't suffer from digital glassiness. I found it fun to use, and it's sure to inspire you to create. Bill Lacey

Stage Traxx is a straightforward backing track player app that imports tracks from iTunes to build up playlists, after which the songs may be re-ordered as required. During playback the next song can be preselected if you don't want to play the songs in order, and you can have playback stop at the end of each song or move automatically on to the next, in which case the currently selected track is highlighted blue and the next one selected yellow. It is also possible to select continuous play for individual songs to create medleys within a playlist. A progress bar behind the song title shows blue until 30 seconds before the end of the song, at which point it blinks red. By default, whenever you hit Play for a track, it starts at the beginning, regardless of where it was previously stopped.

Helpfully for the performer, Stage Traxx can also display lyrics, which are entered within iTunes. These are displayed at the right-hand side of the screen and text size and scroll speed can be set via plus and minus buttons. Stage Traxx also allows up to six Bluetooth pedals to be used to control things like playback and lyric scrolling.

I used Stage Traxx to provide some basic blues backings for a small coffee house gig and it worked very well. Everything you need is clearly visible, and during playback anything that shouldn't be messed with is locked out. The lyrics section can be used to add reminders of things like key and arrangement and overall the display is informative and uncluttered. While the app is cheap enough, a free version is available that limits the playlist size to five songs giving you ample opportunity to try it. Paul White