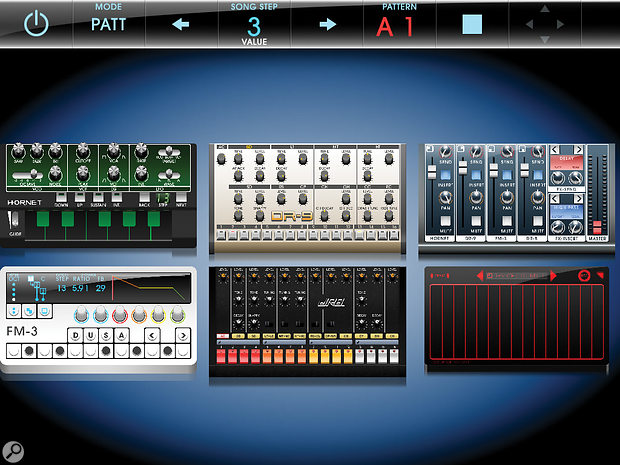 Rhythm Studio very neatly bundles a step sequencer, mixer, and a variety of sound and rhythm generators into one ridiculously low‑priced app, and also provides virtual interconnectivity and a fair amount of touch‑screen control. Most of the modules it includes are modelled on classic pieces of hardware in terms of both their look and their sound, but developers Pulse Code have also taken things a little further by adding a performance‑oriented control pad and support for innovations such as Korg's Wireless Sync‑Start Technology, which enables the synchronisation of two devices.

In all, Rhythm Studio has eight sound modules, including two drum machines and six synthesizers, but only four of the eight can be played at the same time. Fortunately, all the modules are entirely interchangeable, so any combination can be had, and modules can be switched around at any time. It is, for example, possible to fill two of the four slots with drum machines.

The opening display of the app is where all the administration takes place. It is possible to do things like email a song, share a song via Bluetooth, export audio to the clipboard or iTunes File Sharing, import a song from iTunes, create new songs, duplicate them and delete them. It is also the place where the user picks their four modules, sets a song's tempo, key and musical scale and decides how many patterns are used in the step sequencer.

Once a new song is configured and launched, the components that are involved in the composition are laid out across the screen. These include the four selected sound-source modules, plus a four‑channel master mixer and a module called Control Pad MkII, making it possible to jam on top of existing patterns. In addition, an ever‑present control panel sits across the top of the page showing the status of the step sequencer and providing the necessary tools for editing patterns and ordering them in a sequence.

All the sound modules automatically slave to the sequencer, so getting to grips with it early on is important. It's actually very simple to copy patterns and shuffle them about, but I did have to take a look at the manual in order to find out how to do things like pasting a pattern to another position, as there is a lack of visual feedback to let you know what's going on.

Tapping one of the modules instantly makes it expand to fill the display (this applies to the mixer and Control Pad too), where it is ready to be sequenced, edited or played.

As mentioned earlier, Rhythm Studio provides two drum machines for beat creation. The more eye‑catching of the two is the DR8, which is closely modelled on Roland's iconic TR808, almost duplicating its sounds, controls, layout and colour scheme. The other drum machine, the DR9, is modelled on the TR909.

The simplest of the non‑drum machine modules is probably the ST1 which offers a menu of 48 sample‑based synth sounds. Some modification to the sounds is possible by adjusting the envelope attack and decay sliders and a three‑position brightness switch, but really the module's purpose is to provide some quick and easy sound options, and for that reason it is a good source with which to start a track. 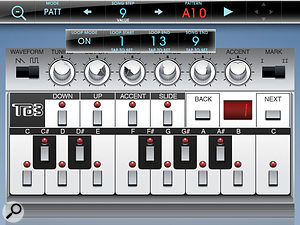 No prizes for guessing what inspired this Rhythm Studio instrument.The TB3 module is, as you might have guessed from its name, a very accurate emulation of Roland's classic TB303 Bass Line synth, which became incredibly popular when house music artists started using it in the late 1980s. Pulse Code have kept the look, the keys and the sound manipulation controls.

The remaining four sound modules are also based on classic synths, but the emphasis is more on providing differing styles of synthesis than cloning desirable products.

The Hornet module, as its name suggests, is great for buzzy sounds, which can range from tonal to pure noise.

Providing a bit of contrast is the FM3 frequency modulation synthesizer. It has three operators which can be routed into one another in various ways for coarse and chunky sounds, or routed discretely when more of a pure synth tone is required.

The Gemini synthesizer covers vintage analogue synth territory and is capable of Arp‑like burbling and thick Moog‑style tones. It has two oscillators with analogue modelled waveforms, a 24dB‑per‑octave resonant filter, ADSR envelopes for the filter and amplifier, a flexible LFO, plus oscillator sync and ring modulation.

Lastly, there is the Phoenix, specifically designed to provide 'Supersaw' sounds. The Supersaw sound is created by using seven detuned oscillators and was originally developed by Roland for their JP8000 and JP8080 synthesizers.

Taken all together, the modules offer a vast range of sounds, although the app's focus is clearly on dance, trance, house and other forms of electronica that make extensive use of groove boxes, sequencers and synths.

Whichever four modules are selected, (and there could be four of the same), they all automatically feed into the mixer module where they can be muted, panned and attenuated. Each channel also has a send control feeding an effects processor with seven effect options, plus an insert button allowing any one of nine dynamic, filter and distortion effects to be used in the signal path.

Perhaps the most important module of all, though, is the Control Pad MkII processor, for it turns the app into a dynamic, performance‑oriented production tool. In essence it is an X‑Y controller which can be fed the signal from any of the four modules. It then automatically assigns certain functions to each axis. For the synthesizers the X axis controls notes, while the Y axis affects their accent triggers at the top, regular triggers in the middle and sustain triggers at the bottom. The drum machines simply have their sounds mapped along the X axis.

When Control Pad is set to record, it saves whatever is put into it without quantising a thing, so, although it adheres to the song's key, it can be played freely, making it great for adding loose or random lines over the top of existing patterns. That said, if a finger is held down on the matrix for more than a fraction of a second, the triggered note or beat automatically begins repeating in sync with the sequencer, and I found that functionality especially useful for creating improvised breakdowns, fills and stutter effects, and began leaving strategic gaps for them in song sequences.

To buy all the original hardware drum machines and synths that Pulse Code have modelled would cost roughly 1000 times Rhythm Studio's retail price, so it seems ridiculous to criticise it, but I hope that the developers find time to add in‑app notes to make some of the functionality a little clearer. Other than that, this is a brilliant app which is more than just a fun toy. Being able to export WAV files via iTunes File Sharing, for example, means that high‑quality recordings can be made and exported, either for release or further development in a DAW. Furthermore, Audiobus support was added as this review was going to press and the price was dropped even further.