From Rhythmic Robot, the instrument that goes 'boing'. I'm trying to think who else would collect 38MB of samples of a 1920s laboratory tuning fork and make them into a Kontakt instrument, but the list is pretty short. In common with all the RR instruments I've encountered so far, the sampling is clear, impeccable and 24‑bit; just what's needed to reproduce noisy, nasty technology from the dark ages! There's no installation as such; you unzip into the folder of your choice, point Kontakt in the right direction and you're away. Incidentally, as usual, it's the full version of Kontakt that's required; any version past 4.2.3 will do.

You're greeted by an interface rendered in simple, attractive graphics. There are just two panels, one of which holds Spark Gap's effects. Under the main panel's image of the sparking tuning fork, a mere eight knobs are offered for adjustment by mouse or MIDI. They consist of an ADSR envelope, twin filters and a level control for 'key off' samples. This innocent‑seeming knob introduces random sparks, hums and glitches whenever you release a note. With over 60 samples in total, key‑off adds a heck of a lot of character to the base fork tones that form the core of the instrument. 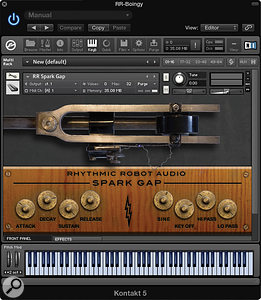 To better appreciate what a laboratory tuning fork is, I recommend a peruse of RR's web site and its typically entertaining tale of sampling this rare device. Instead of the pure tones usually required for tuning, the tetchy antique's efforts are constantly contaminated by the shaking of screws or the buzz of the spark gap as it arcs. This latter component proved so attractive that Spark Gap was chosen as the instrument name. When played polyphonically, the grumbling, not particularly house‑broken relic becomes strangely attractive. Using its Sine control, an untainted sine wave is introduced, which helps bind the samples into a more conventional instrument.

So what is Spark Gap good for? Clearly, there are relatively few points of control. The filters provide shaving tools for the upper and lower frequencies of the fork's output and the envelope holds no surprises either. Sonically, Spark Gap could pass for a broken electronic didgeridoo. Some of the random scratches bear a striking resemblance to my violin playing (at least in the effect they have on my wife). Or, with a suitably fast attack, the sine wave turned up and a little 'key off' sprinkled into the mix, you get a freaky electronic piano for your troubles. Wonky pads are an easy envelope tweak away too, especially if you use the filters creatively. Finally, if you lose the sine wave altogether, there's a source of edgy, fidgety atmospheres ideal for that reality show about gastric bands you got landed with.

Although you'll undoubtedly have a better reverb and delay in your DAW, those that are included fit Spark Gap's character well. For a final dash of sonic seasoning, you can process the output through the convolved impulse responses of a studio condenser microphone or a vintage‑style graphite mic.

Spark gap isn't hugely versatile but it does have a certain charm. I don't mind a one‑trick pony as long as it's a good trick; this one continues RR's honourable tradition of finding beauty in the old and the knackered. It costs a bit more than you'd expect given its niche oddness, but that's my only criticism. Paul Nagle