AKG’s new multi‑pattern USB microphone proves its worth on both instruments and vocals. 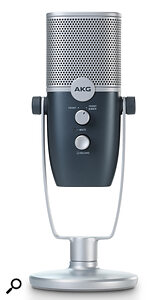 While USB mics tend to be aimed at podcasters, there’s no reason not to use them for music recording, and if you are on the move, they save the hassle of having to take an audio interface with you. The inexpensive AKG Ara is an elegantly styled, dual‑pattern microphone supplied in its own desktop swivel stand. The Ara comes with a thread adaptor just in case you want to unscrew the yoke from the base and mount it on a mic stand, and there’s a USB‑C to USB‑A cable two metres in length. Users can also download a free copy of Ableton’s Live 11 Lite if they complete a registration card.

The two patterns are labelled as Front (cardioid) and Front & Back (figure‑8), the latter being useful in a podcast context for recording two speakers, one on either side of the microphone. A rotary switch selects the desired pattern while a second rotary encoder adjusts the headphone volume and operates the mute function.

Headphones are connected via a TRS mini‑jack with an output impedance of 16Ω. Both the mini USB port and the headphone jack can be found at the base of the microphone. The source signal is mixed in with the DAW return so that latency‑free source monitoring can be set up — you just have to remember to turn down the DAW’s own monitor level for the source being recorded to avoid an annoying echo. 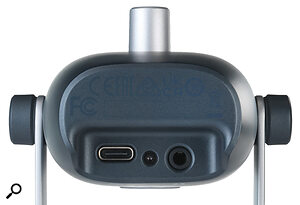 The headphone and mini-USB connections are found on the base of the microphone.Internally the microphone utilises a pair of back‑electret capsules, with the necessary preamp and headphone amp electronics taking power from the USB 2.0 connection. The mic has a specified frequency response of 20Hz to 20kHz, but as no limits are given by the manufacturer, this divulges little useful information. There was no response plot provided so I can’t comment on where the presence peak, if any, is located, but on speech the mic sounded very natural. A maximum SPL of 120dB is quoted, which should be plenty for normal speech and instrument uses, though may be less suitable for close‑miking very loud percussion. Analaogue-to-Digital conversion is 24‑bit, with sample rate support up to 96kHz. There are no filters or attenuation pad switches on the unit.

Once connected, the Ara appears as a class-compliant audio device with a single input and a stereo output. That means no drivers are required, so you don’t have to worry about support being dropped when some future OS upgrade comes along. I set the Ara as the active input and output device in Logic Pro, and at first I thought there was a fault with the headphone output as the volume control didn’t seem to make any difference. It turns out that the Ara also needs to be selected as the output device in the main System Preferences (the operation of the headphone knob is linked to the output volume of the OS), and once I’d done that, it worked fine.

The mic produces a very open and natural sound with no perceptible noise.

Tested with speech at a distance of around 30cm, the mic produces a very open and natural sound with no perceptible noise. There was also no popping during my speech tests even though I didn’t use a separate pop screen. Instruments such as acoustic guitar or even guitar amps presented no problem — indeed, I got a very usable sound from my guitar amp right away just by standing the mic on the floor about 50cm from the speaker, but if you were recording a loud drum kit, it would be wise not to get the mic too close as it could get overloaded causing distortion on transients.

To summarise then, given its price, sound quality and the fact that there are two polar patterns from which to choose, the Ara is a very capable and stylish piece of kit that has uses beyond podcasting.

A classy and versatile USB microphone that has uses in both music recording and podcast creation.